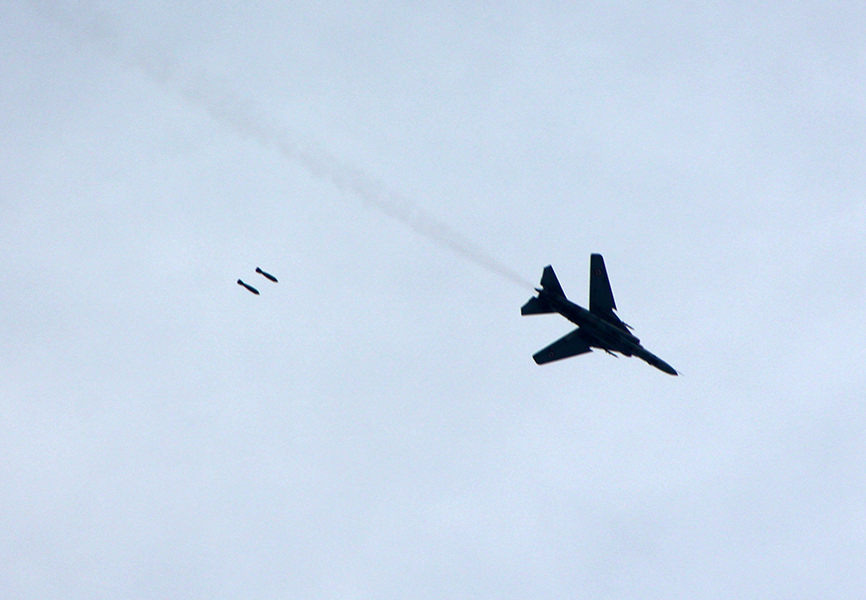 THERE'S BEEN NO MAJOR GEOPOLITICAL CRISIS SINCE 9/11, and none created by governments since the Cuban Missile Crisis. But it's impossible to ignore the risk of such a crisis today, because there are too many places where a misstep or misjudgment could provoke serious international conflict. This comes against a less resilient international backdrop.

We aren't on the brink of World War III. But absent a global security underwriter, and with a proliferation of subnational and non-state actors capable of destabilizing action, the world is a more dangerous place. The likelihood of geopolitical accidents has risen significantly, a trend that will continue. At some point, we're likely to have a mistake that leads to a confrontation. A few worth thinking about for 2018:

The likelihood of geopolitical accidents has risen significantly, a trend that will continue.

Cyberattacks. The risk of a major cyberattack has risen at a time when international mistrust and the erosion of common norms, standards, and architecture has made it more difficult to coordinate responses to attacks when they occur. That makes the risk of overreaction high, even when reaction is warranted. The threat comes both from states (Russia, China, North Korea) and non-state actors (such as Anonymous); the capacity to wreak havoc is rapidly growing, especially given security vulnerabilities and high-level leaks from within the US National Security Agency. The prospect today of an economy-shaking cyberattack is real—be it via the destruction of a critical piece of infrastructure or through forced transparency that cripples the credibility of a leading corporation, bank, or marketplace; or even a takedown of the internet itself (several states have reportedly probed the resilience of the internet's backbone infrastructure). If an actor goes after these targets, we're in uncharted territory. Of all the unexpected geopolitical “accidents” listed here, cyber deserves to be at the top of the list.

North Korea. The world's most obvious risk of geopolitical accident. An unsatisfactory (and eroding) status quo remains the most likely outcome in 2018. Everyone knows that the US has only unpalatable military options. The North Koreans aren't suicidal; further North Korean missile tests are likely, but a direct strike on an adversary is nearly inconceivable. Yet, rocket tests over Japanese territory are intrinsically dangerous and could provoke an escalatory response. So too the expanded military exercises and overflight by the North Koreans, Americans, and allies within easy shooting range of one another. Elevated tensions combined with less trust/coordination among all actors means that mistakes, when they occur, are more likely to ignite a conflagration. The possibility of war, which would risk severe damage to a key US ally and impact global supply chains, remains unlikely. But it's much more thinkable today than it has ever been.


Conventional terrorist attacks continue to be far more likely, and dangerous, in the Middle East, North Africa, and South/Southeast Asia than in the developed world.

Syria. The war in Syria will continue to wind down in 2018, but there will still be plenty of destructive hardware in the field carried by actors in close proximity who don't like or trust one another. Russian and US bombers regularly fly into each other's demarcation zones, and strikes in the wrong place could kill US or Russian troops. US soldiers are embedded with Kurdish forces around Raqqa and other areas east of the Euphrates, and they could become a target for Russia and Iran. It's the Washington-Tehran relationship that's most dangerous in Syria. Trump wants Iran out of the country.

Russia. Trump also wants a better relationship with President Vladimir Putin. But constrained by the most far-reaching presidential investigation since Watergate, a Republican-led Congress, an antagonistic media, and many within his own administration, he can't have one. When Special Counsel Robert Mueller details the conclusions of his investigation, they will focus on Trump campaign (and possibly Trump's personal) connections with the Kremlin's inner circle. Trump opponents will demand a hardline policy response, one Congress will likely support, but which Trump won't approve. Plenty of Kremlin dirty laundry will be aired. Putin might be tempted to respond—perhaps through a data dump attack that includes prominent Republicans among its targets. Putin and Trump aside, US-Russia relations are openly hostile. And once the Mueller investigation concludes, they'll have reason to deteriorate further.

Terrorism. Conventional terrorist attacks continue to be far more likely, and dangerous, in the Middle East, North Africa, and South/Southeast Asia than in the developed world. But the end of the caliphate in Iraq and Syria has pushed many foreign fighters back to their homelands, creating increased risk in Europe, and the online sophistication of the Islamic State has facilitated more copycat attacks. A catastrophic attack in the US remains unlikely. But if one were to occur, the result would be greater division inside the US and overreaction by a deeply embattled Trump looking for a distraction from his political struggles and itching for a fight. The impact would be economically damaging immigration and security policies, and a consequent hit to the strength of US civil society. Even in Europe, more such attacks would continue to facilitate greater populism and more moves by establishment parties to embrace increasingly extreme policies.