The transatlantic partnership has been the world's most durable and significant alliance, underpinning the global economic order and bolstering peace and stability (such as it is) for nearly seventy years. It was the cornerstone for the international architecture that has mattered most—NATO, the Bretton Woods accord, the United Nations, the World Trade Organization, the IMF, and the World Bank. But it is now weaker, and less relevant, than at any point since the Marshall Plan. In 2016, the transatlantic alliance will be a hollow one.

This new reality has been developing under the radar for some time. Three trends have contributed. First, there's a shift in the geopolitical order in which East versus West has given way to “the rise of the different,” with China and other emerging markets creating a much more diverse and complicated set of threats and opportunities for the advanced industrial democracies. Second, there is the emergence of American unilateralism as a policy orientation for both the George W. Bush and Obama administrations, supported by new areas of coercive diplomacy—surveillance and the weaponization of finance—and pushed into the spotlight by the Edward Snowden revelations. Third, there is Europe's strategic weakness, with leaders across the continent fully occupied with a series of economic and political crises.

Foreign policy has arguably become the most important issue in the American election, and yet the transatlantic relationship isn't on the agenda. The United States will turn inward during this highly contentious race, encouraging European leaders to further question US leadership, commitment, and values at a moment when they're focused mainly on their own political futures. That might recede a bit under a more activist, next US president. But the path is set—Europe is divided, vulnerable, and maximally insecure. Governments are going their own way, a trend most obvious in new alignments of Europe's three major powers in new (and opposing) directions.

UNITED KINGDOM–CHINA
It's all about the economy. British leaders worry about the ability to pay for major infrastructure needs when austerity has made budgets ever tighter. The answer? Build a very special relationship with China. The UK led the charge to join the China-led Asian Infrastructure Investment Bank, despite opposition from the United States, to show Beijing that the Brits can be China's most trusted and useful friend. They're opening key investment opportunities to Beijing by showing less regard for concerns about sharing technology, rights, and mainly avoiding security questions such as Taiwan, the South China Sea, or even democracy in Hong Kong. The hope is to secure larger and longer-term investment... as well as to become a global hub for internationalization of China's renminbi.

FRANCE-RUSSIA
It's all about security. The French government faces the biggest terrorism threat in Europe and has a more assertive military policy in the Middle East and North Africa than any other European government. The Americans and Brits are dragging their feet on Syria, while the Germans focus more on diplomacy, humanitarian aid, and infrastructure support. The Russians, by contrast, are taking the military lead with little regard for domestic constraints. French President François Hollande perceives Putin to be Europe's best chance of stemming the flow of Syrian migrants headed for the EU's borders. After the most recent attack on Paris, France used a chapter of the Lisbon treaty to call for collective European security—for the first time in history—rather than turning to NATO, which would have made it much harder (if not impossible) to collaborate with Russia. That speaks volumes about France's priorities and the transatlantic alliance.

GERMANY-TURKEY
It's all about politics. German Chancellor Angela Merkel understands that her open-door refugee policy will work only if the rapidly rising tide of refugees doesn't become a flood. That means working with Turkey, which presently hosts more than 2 million refugees from Syria alone.

Merkel has made significant overtures to Ankara, promising to support fast-track European Union integration for Turkey as well as offering billions of euros to President Recep Tayyip Erdogan if he takes the lion's share of responsibility for the refugees. There's an ostensible economic rationale—the average refugee costs much less to support in Turkey—but tightening German demographics argue in favor of accepting more, not less, migrants. Turkey's limited alignment with NATO goals in the region is a second concern. Growing domestic and European opposition to Merkel's refugee policy will strengthen the pressure behind her outreach.

These are uncertain bets, to be sure, for Britain, France, and Germany. China doesn't trust the more geopolitically active Britain or find it as economically useful as Germany, and a perception of desperation in its partners usually leads Beijing to push for tougher commercial terms. France will be limited in its ability to secure broader international support for cooperation with Russia, which continues to antagonize both the Americans and many of France's European allies. And Germany's Turkey play is opposed by pretty much everybody. All three of these bets come from weakness and insecurity. European governments are looking to the future and hedging their bets on traditional partnerships.

This year, we'll see these hedges play out in transatlantic divisions over Ukraine, where the Europeans have been less enthusiastic than the Americans about slapping sanctions on Russia. They feel the economic consequences of those sanctions far more acutely than Americans ever will. That consideration will combine with France's security concerns and more pro-Russian inclinations of leaders including Hungary's Viktor Orban and Greece's Alexis Tsipras. This makes the Europeans likely to ease their sanctions on Russia later this year. Washington will not follow suit.

We'll also see a growing gap over Syria. There is a fundamental disagreement between the Europeans and Americans over whether working with Putin in combatting ISIS (and, to a lesser extent, working with him toward a political solution to the Syrian civil war) is an acceptable proposition. They may once have shared the view that President Bashar al Assad must go, but many European leaders are now more willing than Washington to compromise on the details of that proposition at this late stage in the country's civil war.
In 2016, the transatlantic relationship no longer plays the decisive role in shaping the top priorities for Europeans and Americans alike. The perception of common values and their importance for the global free market are eroding, giving rise to a much more diffuse order of lowest common denominators.

The hollow alliance doesn't make us more pessimistic on climate change; that's a truly global problem and now understood as such. But the Europeans and the Americans will increasingly be going their separate ways. Trading patterns and political allegiances will diverge. The most important risk pertains to the global security system. There's just no more international fireman of any kind; this year will see both a reticent hegemon and a weaker Western coalition. Think the Middle East was troublesome in 2015? This ensures it gets worse. 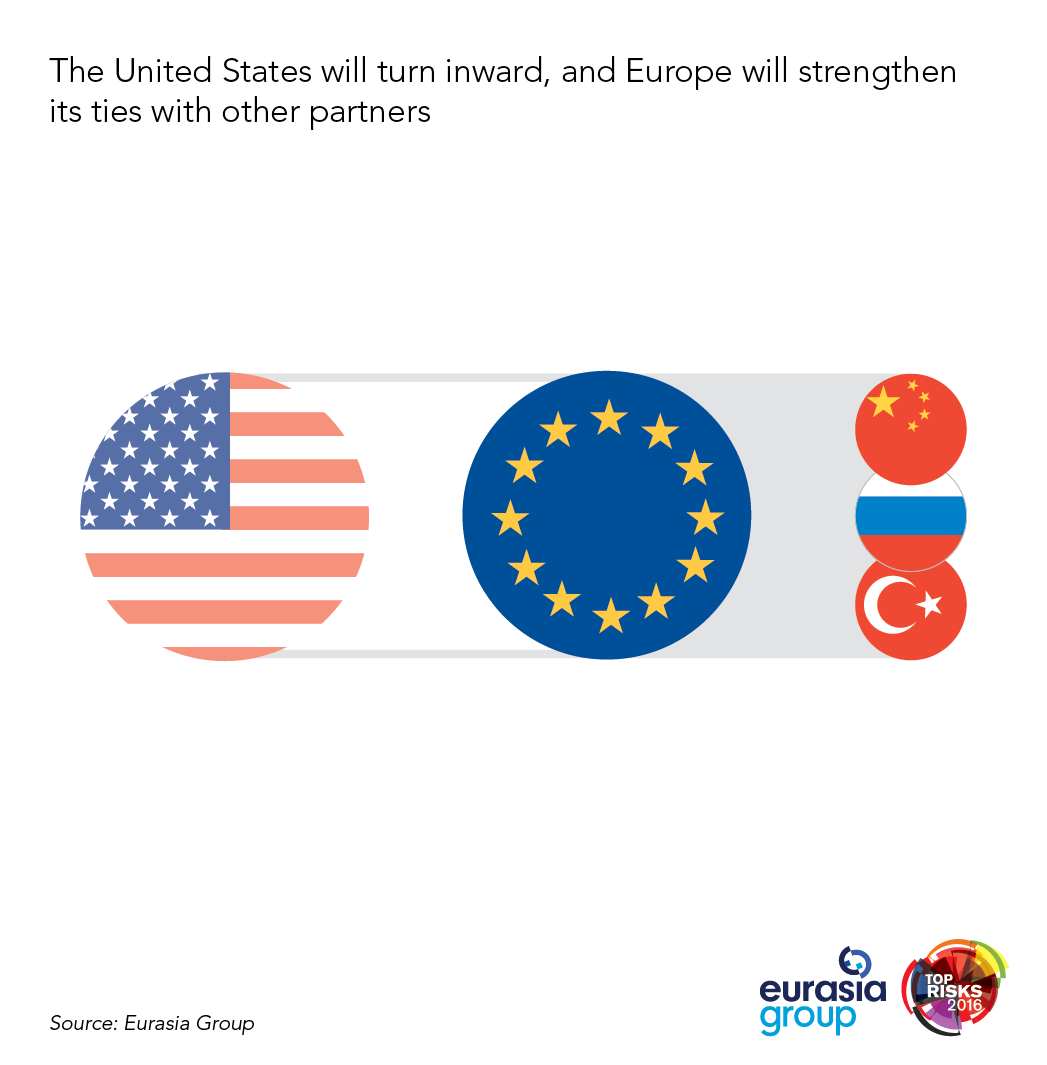