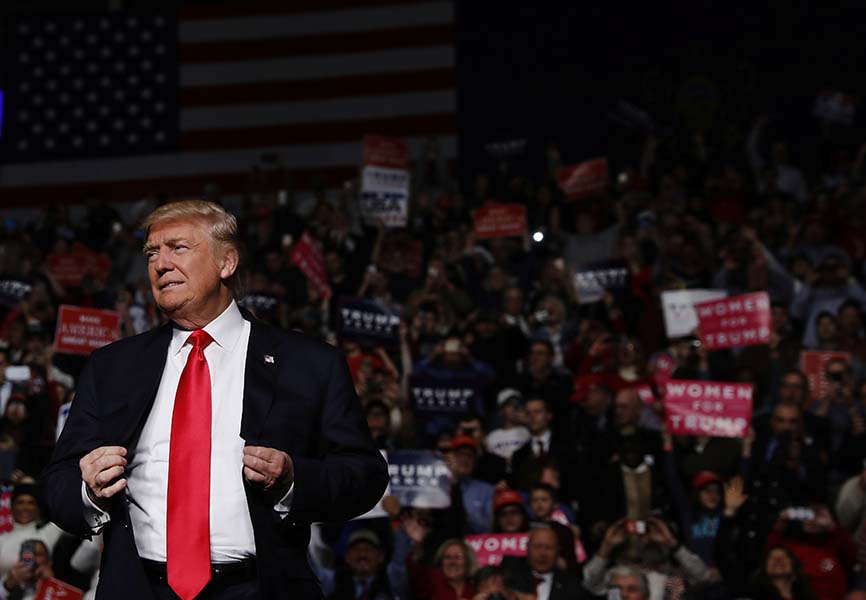 TRUMP'S "AMERICA FIRST" PHILOSOPHY and his pledge to “make America great again” build on the most core of American values: independence. For Trump, that means independence from America's responsibility to play an indispensable role in world affairs, shaking off the burdens placed on the US by multilateral institutions and a range of allies. If there's not an obvious, near-term benefit for the US, or if it's the provision of a “public good” where others are free riding, it's not something the US should be doing.

Militarily, independent America doesn't signal a reluctance to use force, but a decisive willingness to use it to defend core US interests without regard for the consequences for others: Trump has promised to “bomb the hell out of ISIS," extend surveillance capabilities, and otherwise leverage US coercive power to punish enemies. Independent America will be more hawkish than Barack Obama's foreign policy.

Economically, independent America translates into industrial policy—if the excesses of free markets allow corporations to capture the state, Trump wants to use the power of the presidency to turn the tables on key economic actors.  He has a fundamental mistrust of existing free trade relationships and of globalist multinational corporations that he believes are enriching themselves without regard for the well-being of American workers. Trump will promote patriotism on both fronts—by squeezing bilateral relationships to create better terms for a more powerful America and by using carrots and sticks to convince corporations to invest more (and keep more jobs) in the US.

The shift is greatest on values: independent America renounces exceptionalism, the notion that the US actively promotes democracy, civil rights, and rule of law. Trump's approach toward alliances, and multilateral institutions more broadly, is transactional. Talk of common values can become a smokescreen that allows allies to take advantage of the US. And the US doesn't always live up to those values anyway. Alliances should be more businesslike. They make sense only if there's a near-term “win-win.” They should be more flexible in a rapidly changing environment and should not be limited by treaties that don't serve US interests in today's world (NATO, the One China policy, the Paris climate deal, the North American Free Trade Agreement).

This is not isolationism. As leader of the world's most powerful country, Trump rejects the comparative weakness of the presidency. He is a resolute unilateralist.

There's a logic to these arguments that will make this change of direction “sticky” for much of the US public. A solid majority of Americans has little interest in continuing the country's role as world leader.  They feel (correctly, in many cases) that they haven't personally benefited from global trade. A series of recent US military interventions has produced expensive failures, widely denounced in other parts of the world.  Meanwhile, the growing geopolitical discord of the G-Zero represents a far greater challenge for other regions than for the US (think refugees and terrorism in the Middle East and Europe; the arms race in Asia).
All of this creates several areas of political risk.

First and foremost is the near-term chaos that comes from an absent superpower.  That's most evident in Europe, where Trump's political tilt toward Russia, his tepid support for NATO, and his alignment with like-minded and antiestablishment movements across the continent (France's National Front, the Netherlands' Freedom Party, and the like) further weaken what had been the most important alliance for protection of the global order. So too for the Middle East, where there's no single regional actor that can come close to providing stability and security, leaving competing state and non-state actors to drive further conflict.

Second is the broader weakening of institutional architecture. Independent America speeds the fragmentation of global trade and capital flows, a global internet, and a coordinated response on climate change. The US has been the primary funder and supporter of the world's core multilateral institutions, like the UN and the World Bank. With independent America, those institutions will come under greater political scrutiny and financial pressure as the Trump administration reexamines their usefulness to US national interests.

Independent America renounces exceptionalism, the notion that the US  actively promotes democracy, civil rights, and rule of law.  Trump's approach toward alliances, and multilateral institutions more broadly, is transactional.

Third is the rise of China and the growing potential for direct conflict with the US. President Xi Jinping sees independent America as a core opportunity to advance China's security interests across Asia, and China's economic interests much more broadly. Xi's recent public speeches calling on China to be the new leader of globalization, his attendance later this month at the World Economic Forum's annual meeting (the first ever for a Chinese president), and his unprecedented support for the incoming UN secretary general highlights an inflection point for the “growing teenager” China, greater than its emergence on the world stage with the Beijing Olympics in 2008.

That rise will lead most US allies in Southeast Asia to shift allegiance toward Beijing, and it will create an expanded Chinese role in international economic governance (though mostly through more opaque, bilateral channels). But China's new opportunity to set rules and the Trump administration's search for “new and better deals” will also make it more likely that China will collide with US national interests. Add Trump's unwillingness to be bound by traditional avenues of diplomacy and the impact that will have on clear communication between the two governments. Xi will feel the need to respond decisively when he perceives key Chinese national interests at stake. We could see confrontation in a number of areas: over a US warming of relations with Taiwan, the growing nuclear threat from North Korea, or through economic tensions on currency, intellectual property, and trade as Trump's efforts at industrial policy are thwarted by the world's leading state capitalist economy (hence risk number two, China overreacts).

A final risk flows from independent America and system breakdown. It's that Russia can act as a rogue and disrupter—and get away with it. The “stiff” US response to Moscow's election-related hacking won't change Putin's behavior. He'll hack away at the French and other upcoming European votes. And the West won't want or be able to muster a serious response—Trump's not interested and EU leaders are either too weak or tired of sanctions. Similarly, Putin will use his “win” in Syria as a springboard to increase Russian influence in the Middle East—with little pushback. Independent America leaves Putin with a lot of running room.

To quote former president John F. Kennedy: “Domestic policy can only defeat us; foreign policy can kill us.”