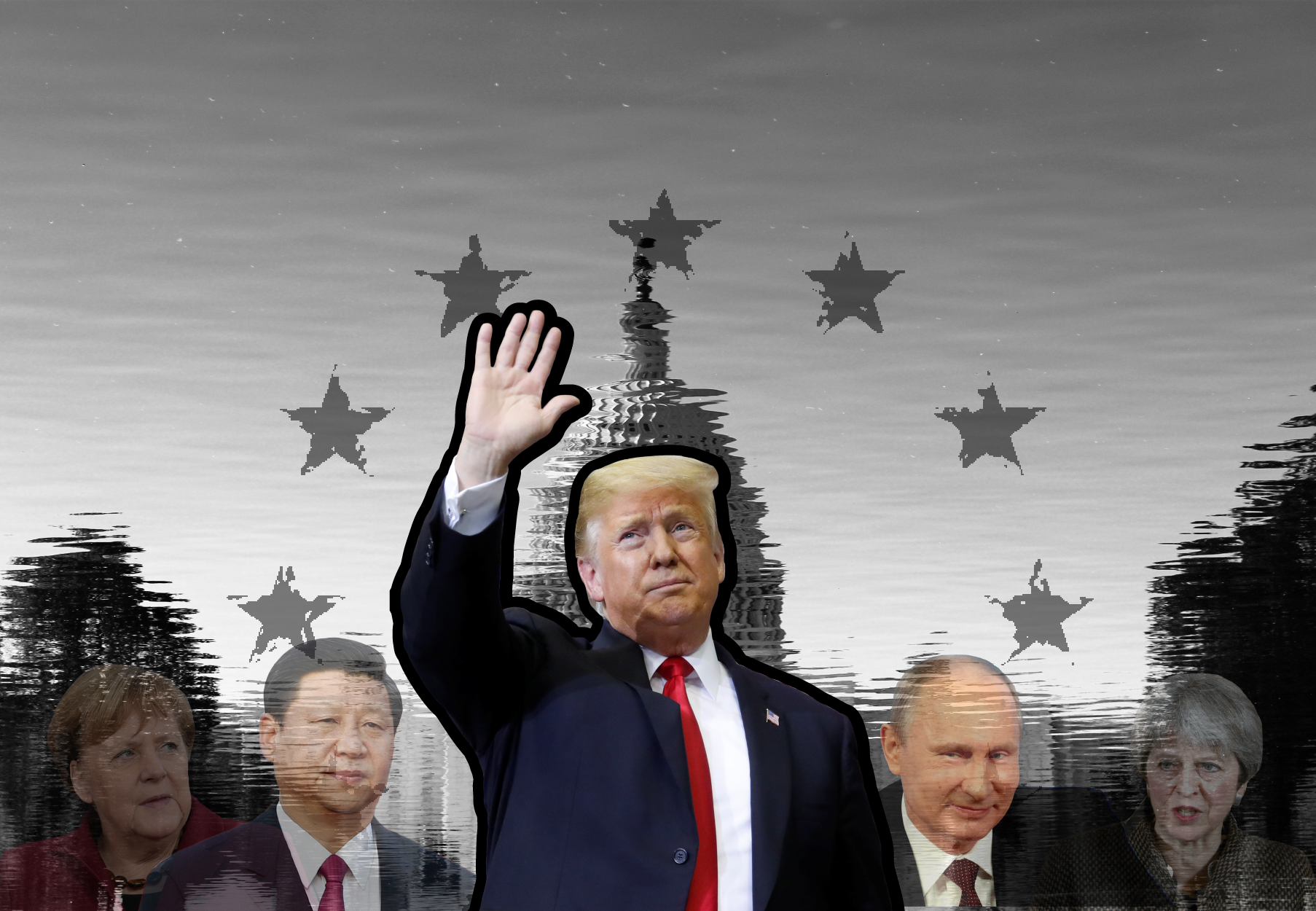 THE GEOPOLITICAL DANGERS TAKING SHAPE AROUND THE WORLD will bear fruit in the years to come. This is the greatest impact of the G-Zero: The world's decision-makers are so consumed with addressing (or failing to address) the daily crises that arise from a world without leadership that they're allowing a broad array of future risks to germinate, with serious consequences for our collective midterm future.

The overwhelming majority of geopolitical dynamics that matter are now headed in the wrong direction.

Consider the trajectories of all the current geopolitical dynamics that matter. Start with the big ones. The strength of political institutions in the US and other advanced industrial economies. The transatlantic relationship. US-China. The state of the EU. NATO. The G20. The G7. The WTO. Russia and the Kremlin. Russia and its neighbors. Regional power politics in the Middle East. Or in Asia, for that matter.

Every single one of these is trending negatively. Every single one. And most in a way that hasn't been in evidence since World War II. Indeed, the overwhelming majority of geopolitical developments that matter, the wide array of issues that we follow at Eurasia Group—more than 90% of them—are now headed in the wrong direction.

These relationships and institutions won't collapse tomorrow, but the risks plaguing them are landmines. That's especially important because they're all pieces of the international architecture, some of them foundational. Eventually, people are going to get hurt. Think climate change, but in the geopolitical sphere.

Let's take a closer look at several of these bad seeds.

a – US political institutions

It's not urgent. President Donald Trump has been notably constrained by US institutions—the judiciary slapping limits on his immigration policies, bureaucrats slow-rolling regulatory changes, and Congress focused on incremental approaches to change rather than passing legislation that generates sudden, dramatic upheaval. Not to mention preventing Trump from taking any measures to impede special counsel Robert Mueller's investigation. Indeed, after two years of the Trump administration, the most important domestic takeaways are how resilient US political institutions have proven and how effectively they've limited Trump's intended actions.

But damage is being done to the legitimacy of democratic institutions in the world's largest economy. The list of examples is long. Trump publicly contradicts high-confidence estimates of US intelligence agencies. He claims choices made by lead actors at the Justice Department and the FBI are politically motivated. He insists the judiciary is biased against him and that journalists are enemies of the people.

An overwhelming majority of Americans don't trust Congress. The political parties have grown further apart, and the political center has disappeared—nearly half of all Democrats and Republicans now report they “hate” the other side. Social media has further undermined people's trust in what's true, and there's no clear message from government on how large information technology companies should be regulated.

Meanwhile, Trump has weaponized the divisions between his supporters and those who oppose him, transforming governing institutions into political battlegrounds, weakening the long-term functionality of a representative democracy, and persuading a larger percentage of citizens that the system is “rigged” against them. If Trump is defeated in 2020, the trend will slow. But American liberal democracy and accompanying values aren't what they were. No one can put humpty dumpty back together again.

It's not urgent. The ongoing Brexit debacle has made clear that nobody benefits from an exit. That, in turn, has forced euroskeptic parties like the National Rally (France's rebranded National Front) and the League (Italy's former Northern League; why do these far-right parties keep changing their names?) to shift gears.

But nearly every current trend in Europe weakens the broader European convergence project. Obviously, without the Brits, Europe isn't what it was. With Chancellor Angela Merkel in succession mode, neither is Germany. With President Emmanuel Macron at 23% approval, facing a state of national emergency and his domestic and European-integrationist reforms a dead letter, there's a limit to what can be expected from France. Now consider the governments—in Italy and much of eastern Europe—controlled by those who want to assert more national sovereignty to claw back power from Brussels. Add a more divided European parliament after May elections (please see Top Risk #4), and Europe is headed toward (at best) a more fragmented future or (at worst) a long, slow unwind.

Presuming no immediate unforeseen emergencies, European governments can handle shocks more easily when there's decent economic growth and money to spend. But when belts must be tightened, fights become crises. The reason many in the UK voted to leave the EU is that they recognized it wasn't fit for purpose over the long term. On that count, they look to be right.

c – The system of global alliances

It's not urgent. The US remains a critical ally for most of the world's developed nations. And it isn't going home this year.

But US alliances everywhere are weakening. Trump has said it's not America's job to police the world and other nations must pay for their own security. Trump's views on trade are decidedly unilateral. And the US has stepped well back from promoting common values; indeed, it's hard for the US to agree what American values are. On all three fronts, the Trump administration sees alliances as corsets that restrict the US's ability to pursue its interests. That means alliances are eroding and will continue to do so. Transatlantic relations are in the roughest shape given challenges on both sides of the Atlantic; in particular, US-German and US-French relations are deteriorating. That undercuts NATO and the broader international order. Trump's skeptical view of alliances could well spread next to bases and activity in the Middle East.

Asia is least affected. Both Trump and the political establishment remain committed to the region, in large part because of China's rise. The US-Japan alliance remains strong. But even here, watch South Korea, where Trump would prefer to reduce the US military presence, while continuing to create uncertainty on trade. Trump's doubts about alliances create opportunities for Chinese leader Xi Jinping, Russian President Vladimir Putin, populists in Europe, and others happy to exploit frustration with Washington. This trend will slow if Trump fails to win a second term as president, but the move toward a more modest conception of American power and a weaker set of alliances began well before Trump arrived.

It's not urgent. Aggrieved and disenfranchised populations remain minorities in most developed countries, with less ability to force change than the elites in power. The political “swamp” resists being drained, and most governments continue to allocate resources much as they have over the past several decades.
But these trends are becoming more toxic, especially given the growing disintermediation of labor from capital. The “fourth industrial revolution” is appropriately named for its beneficiaries—it promises more growth and more efficiency. But for those whose jobs are lost to automation and don't have the education and training to find new employment that demands new skill sets, it's a post-industrial revolution. They'll end up part of an expanding group who believe their political systems can't meet their needs.

These polarizing trends now being politically exploited across the advanced industrial world and in pockets of wealthier emerging markets are likely to intensify and spread over the coming decade, weakening governments and delegitimizing political leaders as a consequence. Along with the US-China conflict, this is the risk that will be most frighteningly intensified by the next global economic downturn. We don't want a repeat of the 1930s.

There are others we could add to this list. Xi's success in consolidating so much power in China is a “bad seed” because it makes decision-making in (what will soon be) the world's largest economy less predictable and a smooth future leadership transition much more challenging. The fight among regional powers for dominance in the Middle East is set to pose a much larger challenge over time, especially given the reduced value of their oil exports for the global economy. Decentralization of control over dangerous technologies—particularly malware, drones, and biological weaponry—is another. Add the continued inadequate and poorly coordinated political response to climate change. Those are far more bad seeds than we've ever seen geopolitically. We're not looking forward to the harvest. 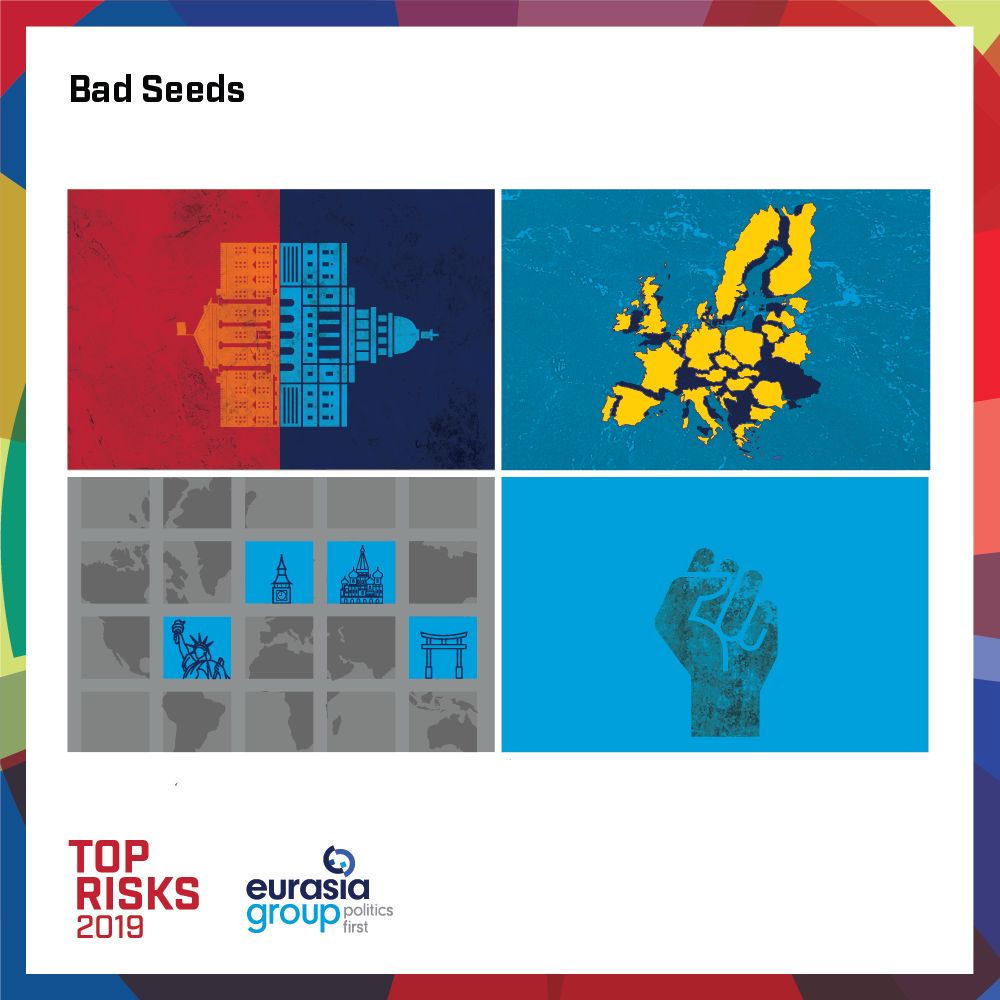