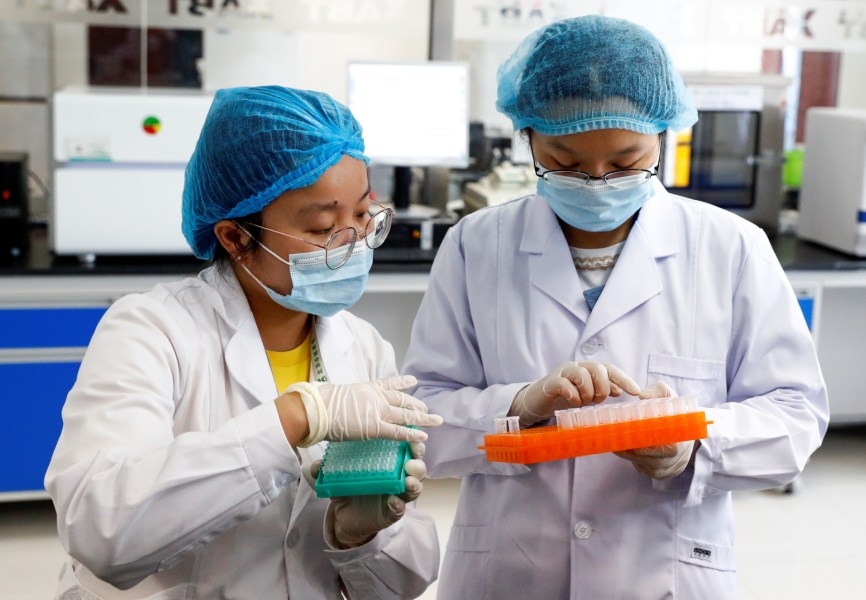 Employees at Beijing Applied Biological Technologies Co's R&D laboratory following the coronavirus outbreak. REUTERS.
Even before the pandemic, the once powerful forces of globalization were encountering stiffening resistance from rising nationalism around the world. Now the unprecedented health and economic challenges posed by Covid-19 are reinforcing the desire to protect local companies and resources. As Eurasia Group experts David Livingston, Caitlin Dean, and Peter Ceretti explain, key sectors of the economy including agriculture, healthcare, and technology could be reshaped in ways that have long-lasting effects on politics, business, and daily life.

The direct casualties of Covid-19 could soon be vastly outnumbered by the secondary casualties. The UN World Food Programme has warned that a looming “hunger pandemic” could affect more than a quarter of a billion people, including those inhabiting war zones and millions of out-of-work daily wage-earners. Meanwhile, labor shortages in the agricultural supply chain are creating obstacles to planting, harvesting, and processing food. Though most countries classify these as essential activities and are allowing work to continue, many workers have fallen sick, died, or refused to show up. In addition, the sector often relies on migrant populations that are unable to cross state or national borders during lockdowns. Food distribution problems are arising from restrictions on transportation.

The prospect of widespread social and political instability—countries in South America, Africa, and Asia have already suffered hunger-driven protests and looting—will provide incentives for governments to intervene. They will enact export restrictions and stockpile key staples (as China has started doing) or tap into reserves to stabilize prices, as Russia has done with wheat. Saudi Arabia, a major net calorie importer, has acquired farmland assets abroad. US President Donald Trump has signed an executive order requiring meat processing plants to remain open after they had cut capacity by as much as 80% because of Covid-19 outbreaks. Countries are trying to ramp up domestic food production—city-state Singapore, for example, is expanding urban vegetable farming. Longer term, the negotiation dynamics in trade deals could shift, with countries seeking to protect local food production. In Europe, for example, policymakers may be less willing than ever before to cede ground on oft-contested denominations of origin, seeing them as a way to protect domestic agriculture.

The pandemic has led to a surge in demand for personal protective equipment (PPE), sending prices sharply higher as healthcare authorities around the world scramble to procure sufficient quantities of gloves, masks, gowns, and respirators. The centrality of China in the global supply of PPE, as well as the dominant position of China and India in the production of medicines and active ingredients, have come starkly into relief. These two countries will continue to prioritize domestic needs over international sales. Chinese merchandise export figures from January/February-March suggest that significant quantities of PPE that might otherwise have been shipped abroad were instead used domestically.

Wealthier countries are likely to pay premium prices to acquire sufficient stocks of drugs and equipment, though their governments will press firms and take regulatory action to ensure that domestic needs are met. Over the medium term, some Western governments are likely to explore options for reducing the pharmaceutical industry's reliance on China and India, although cost pressures will make a meaningful rebalancing difficult. The political impulse to reshore production of drugs and PPE will be strong, particularly in the US, as the Trump administration ratchets up rhetorical pressure on China in the run-up to the 2020 election. When a vaccine for Covid-19 is eventually developed, international distribution is more likely to be marked by competition and unilateralism than by cooperation and multilateralism. The scramble for an edge in coronavirus response is already apparent, from Israel's muscular employment of the Mossad national intelligence agency to track down vital supplies to Trump's purported attempt to acquire a German pharmaceutical firm and the exclusive rights to a potential coronavirus vaccine and the proliferation of offensive cyber activity related to the search for a cure.

Social distancing policies have accelerated the adoption of the long-promised paradigm of telework and heightened awareness of the diverse suite of enabling technologies needed to make it a reality, from broadband internet access and reliable videoconferencing software to secure cloud-based storage and beyond. The “surface area” of sensitive activities carried out over the internet will likely see a structural increase, even after economies and workplaces have reopened. Over the past several weeks, Brexit negotiations, G20 ministerial meetings, and a historic OPEC+ agreement were all conducted over video. Whereas the highest-level discussions may eventually return to the physical realm, many important ones will remain virtual. Digital data—storable, sortable, usable, hackable—are being created at the fastest pace in history.

Concerns over the vulnerability of this data and the infrastructure that supports it will strengthen the desire of governments around the world to tighten their control of the technology sector. Data localization policy debates—a perennial source of friction between the US and countries such as India—will intensify, and the expansion of e-commerce during the crisis will prompt more consideration of digital taxes by governments in search of new revenue streams. The US-led push to keep China's Huawei from dominating the market for next-generation 5G equipment will gain new momentum, with firms viewed as Western alternatives to Huawei emerging as big winners. They are likely to receive increased state subsidies in the years to come, whether it be subsidized market creation, capital infusions, privileged access to Western government procurement, or other avenues. More broadly, investment in the technology sector will ramp up as countries seek to strengthen their digital infrastructure, with software-focused, rather than hardware-focused, providers in fields such as cybersecurity likely to be the most resilient to shocks from supply chain geopolitics.