Eurasia Group | As pandemic recedes in some countries, tourism industries prepare to restart

As pandemic recedes in some countries, tourism industries prepare to restart 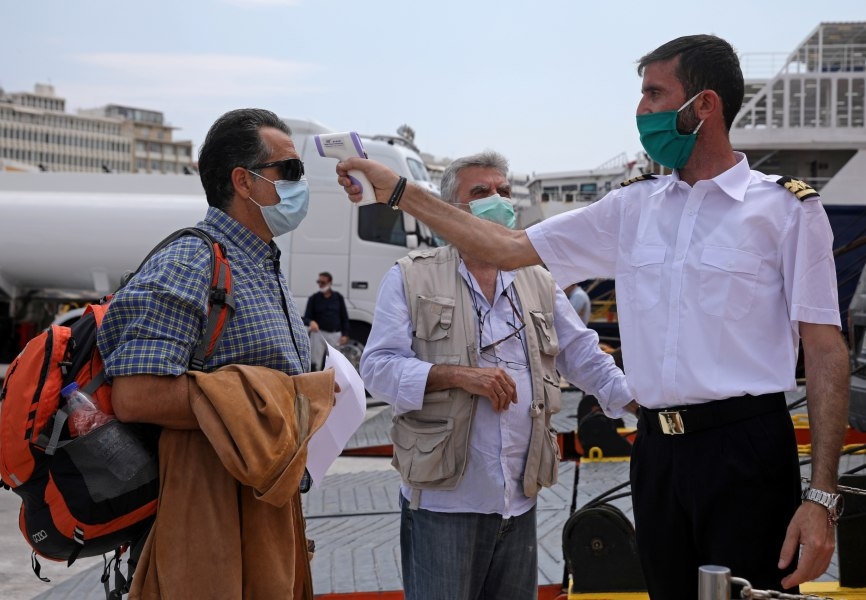 A crew member checks a man's temperature before boarding a ferry in Piraeus. Greece has resumed travel from the mainland to islands. REUTERS.
Though the coronavirus outbreak continues to spread in many parts of the world, some countries that rely heavily on tourism believe that health conditions within their borders have improved enough to allow them to start welcoming visitors again. Still, barriers remain high for international travel, as pandemic-scarred populations will be wary about venturing abroad and many countries will remain no-go zones. Eurasia Group experts review some of the cautious first steps taken around the world to restart this vital industry.

As the first Southeast Asia country to come out of lockdown, Vietnam is likely to enjoy a head start over regional peers, notably tourism-dependent Thailand, in welcoming the return of foreign travelers. Having gone for more than a month without new domestically transmitted cases of Covid-19—though there have been more than 50 imported cases, all quarantined upon arrival—Vietnam will likely start receiving international tourists in the third quarter. Authorities recently announced that they will start issuing e-visas on 1 July, but it is unlikely that visitors from all 80 listed countries (which include coronavirus hotspot Brazil) will be allowed. Initially, arrivals will probably be restricted to tourists from countries in the region that have brought the epidemic under control, including China and South Korea, as well as from selected ASEAN neighbors.

The UAE's robust healthcare and policy response, including significant stimulus for the private sector and a cautious approach to resuming business and retail activity, will likely pay off as it restarts normal economic activity ahead of its neighbors. Dubai, which relied on tourism for 12% of GDP in 2019, aims to reopen to international travelers in July as well as to reclaim its position as a major transit hub. Emirates airline resumed flights to nine destinations on 21 May; Doha-based rival Qatar Airways plans to fly to 80 destinations worldwide this summer. Meanwhile, Abu Dhabi has launched its “Safe and Clean Certification Program” to ensure high levels of cleanliness in tourism-focused businesses.

Some tourism-dependent countries such as Egypt and Sri Lanka are encouraging more domestic travel to offset the decline of foreign visitors. In Egypt, officials have said that internal flights can resume next month, while Sri Lanka is targeting 1 June for resumption of domestic flights (and 1 August for international flights). While this reorientation toward domestic travelers will help support the sector—which accounts for millions of jobs—it will not be able to compensate for the loss of foreign currency inflows amid the decline in international tourism.

Portugal and Greece, which have earned plaudits for their aggressive approach to battling the pandemic, are heavily reliant on tourism revenue and will be severely affected by reduced tourist numbers this summer, even barring any new major flare-up in infections. However, they have an edge over larger southern European economies, Spain and Italy, which were much more severely affected. Greece will open its borders to nonessential foreign travel on 1 July, although it will deny entry to visitors from countries that have yet to get their outbreaks under control. Travelers to Greece will not face mandatory testing or quarantines, and the government plans to upgrade healthcare resources in smaller islands. Greece, however, has one of the lowest testing rates in Europe, raising some concern that it will not be able to identify and contain any potentially large outbreaks.

Georgia is seeking to brand itself as a safe haven from the coronavirus, and it too plans to reopen for international tourism on 1 July. Tourism is the fastest growing industry in the country and last year accounted for 11.5% of GDP; the government's first economic rescue package prioritized this industry. Government officials admit, however, that international flights will need to be restored gradually—the majority of tourists come from Russia, Azerbaijan, Armenia, and Turkey, and progress combating the virus in these countries will have a big impact on Georgia's plans to restart tourism.

Some countries are also forming ad hoc partnerships to facilitate international travel. In Europe, 11 states agreed to a plan for normalizing cross-border travel, based on a proposal presented by the European Commission last week. The Commission's so-called Summer Package addresses the concerns of member states with a high reliance on tourism that feared that unilateral, uncoordinated measures could doom the crucial summer travel season. The Commission is also flexing its legal muscles to defend free movement and travelers' rights within the EU, while also taking into account the unique conditions presented by the pandemic. It has, for example, again reprimanded some airlines for refusing to issue refunds instead of the travel vouchers most people have been offered.

Other countries are striking agreements to allow movement within spaces they are calling travel bubbles or travel corridors. Australia and New Zealand have agreed that once their governments lift stay-at-home orders, people will be able to freely travel between the two countries without being forced to quarantine for two weeks when they reach their destinations. Officials in both countries have suggested that once established, the bubble could expand to include smaller South Pacific island nations or even Taiwan and Singapore. Latvia, Lithuania, and Estonia created a bubble on 15 May, allowing unrestricted travel for people among these Baltic nations. They might invite Poland and Finland to join as well. Greece, Israel, and Cyprus are also in negotiations to create a bubble and have discussed allowing some other European and Asian nations to join the project.