Eurasia Group | Meetings to watch at the UN General Assembly

Meetings to watch at the UN General Assembly 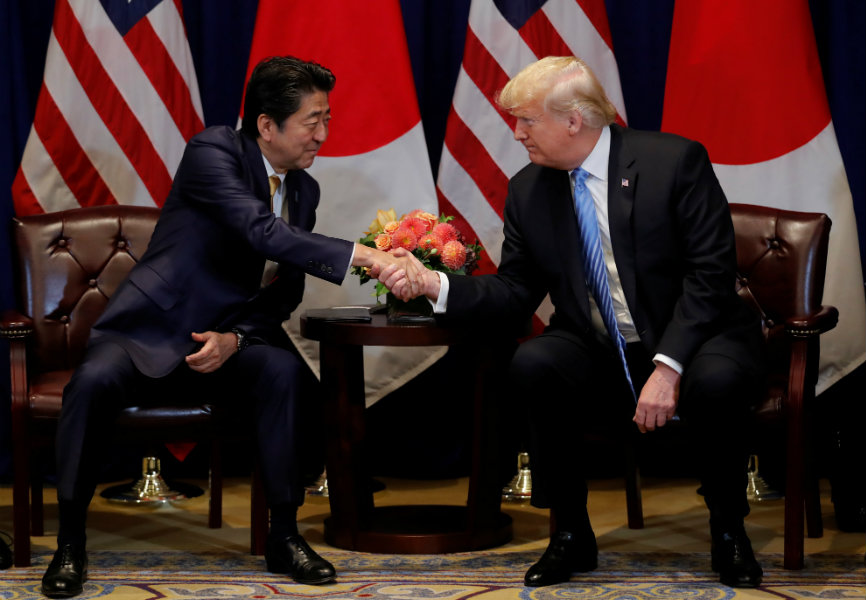 US President Donald Trump and Japanese Prime Minister Abe Shinzo at the 73rd session of the United Nations General Assembly in New York. REUTERS.
Hundreds of world leaders will gather this week in New York for the UN General Assembly. Against a backdrop of rising geopolitical tensions, they will have plenty to discuss. US domestic politics will also likely get an airing—for example, at the meeting between President Donald Trump and his Ukrainian counterpart, Volodymyr Zelensky. Eurasia Group experts explain some of the issues that will be in focus.

This will be the first meeting between Trump and Zelensky, and one that the Ukrainian president has pursued since he took office in May. He especially wants greater US involvement in his push to end the war in eastern Ukraine that has killed at least 13,000 people since 2014. Zelensky has proposed US participation in talks that already include Russia, France, and Germany (the so-called Normandy Four). Trump has lent Kyiv little rhetorical support over the conflict with Russia and its proxies, but he has sent Ukraine's military the defensive weapons it long sought. It was never clear how much more help Zelensky could expect, but this meeting has become more complicated. It will take place days after reports alleged Trump pressured Zelensky to restart investigations that could hurt Trump's political opponents, including presidential contender and former Vice President Joe Biden. Much like the US relationship with Russia, ties with Ukraine risk getting caught up in US presidential politics.

UK Prime Minister Boris Johnson will meet with German Chancellor Angela Merkel and other European leaders as he enters the final stretch in his efforts to take his country out of the EU—something he has vowed to do “with or without a deal” by 31 October, the latest Brexit deadline set by the Article 50 process. But to prevent an economically disruptive no-deal exit, the UK parliament recently passed legislation requiring Johnson request another Article 50 extension if an agreement establishing new trade relations between the two sides is not struck by 19 October, just after the 17–18 October meeting of the European Council. So Johnson is scrambling to bridge the gap on wide differences with other EU leaders on the issue of the Irish backstop, which would force Northern Ireland to remain in the EU's orbit to avoid putting up a hard border with the Republic of Ireland. This has been a key EU requirement for a new deal. Failure to resolve this issue would likely bring down Johnson's government and force new elections.

Trump is expected to declare a truce on the Japanese front of his global trade war after a meeting with Japan's prime minister, Abe Shinzo. The two leaders are likely to announce an agreement that would lower Japanese tariffs on beef and other American farm products in return for cutting US tariffs on industrial goods like machinery. The deal is also expected to lower the likelihood of threatened US tariffs on Japanese autos and auto parts, though probably not as much as the Japanese would like—it will probably not include an iron-clad promise in writing that the so-called 232 threat is gone. But Abe is eager to limit risks for his country's vital auto industry and to prevent the fallout from the trade dispute from affecting other aspects of the bilateral relationship. Trump, for his part, is under pressure to offer relief to US farmers, who are suffering from Chinese tariffs and from new challenges in Japan given the advantages the Comprehensive and Progressive Trans-Pacific Partnership and the EU-Japan trade pact have given competitors there.

One of the most eagerly anticipated potential meetings—between Trump and Iranian President Hassan Rouhani—now looks unlikely. Though the UN provides the perfect venue for accidental run-ins and last-minute surprises, the barriers to a meeting are high following the recent attacks against Saudi Arabia and a new round of sanctions the US has slapped on Iran in response. Iranian Supreme Leader Ali Khamenei said a few days ago that “no negotiations will take place” between Iranian and American officials at the UN. A proposal from the French, in which Iran would meet with Trump, return to nuclear deal compliance, and reduce threats in the Gulf had raised hopes for a meeting. Under the terms of the proposal, France would offer Iran a $15 billion line of credit based on the pre-payment of oil, which would require a green light from Washington. The idea attempted to creatively bridge the gap between Washington and Tehran: Trump wanted a meeting without offering sanctions relief, while Tehran wanted sanctions relief without meeting Trump. Even if the sit-down doesn't happen this week, talks at some point in 2019 or 2020 remain a possibility.