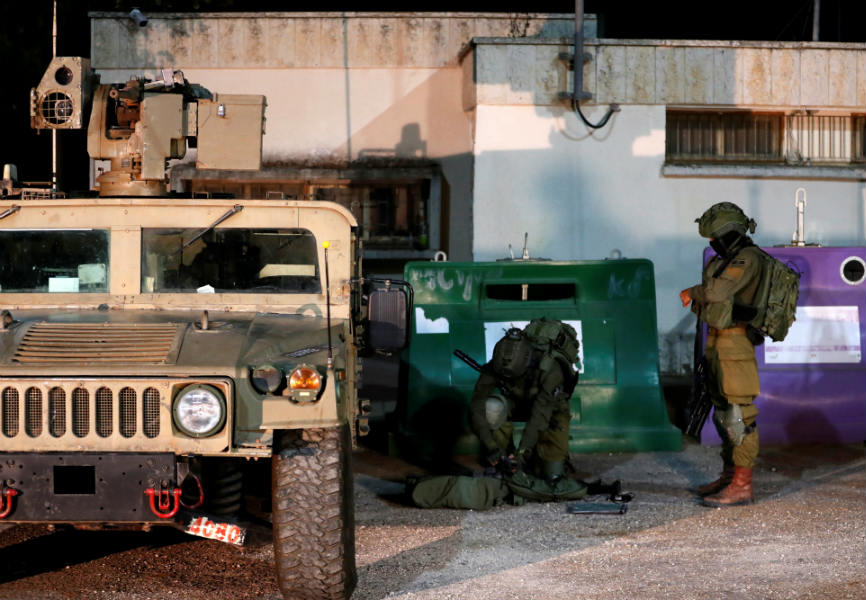 Israeli troops near the Israel-Lebanon border. REUTERS.
Israel and Iran-backed Hizbullah exchanged fire across the Israel-Lebanon border for the first time in years over the weekend, sending tremors across the Middle East. As Eurasia Group experts Ayham Kamel and Henry Rome explain, the incident was caused by an uptick in recent weeks of Israeli strikes against perceived Iranian threats, but both sides have incentives to avoid a regional conflagration.

Why is this happening now?

In recent weeks, Israel carried out a series of attacks against advanced precision guided missiles and drones that could present a threat to Israeli defenses. The attack on two Hizbullah commanders in Syria, an airstrike in Qaim, Iraq, and a strike against Hizbullah infrastructure in Beirut are all part of a pattern of escalating attacks against Iranian interests in the region.

The most provocative of these actions was the attack in a southern suburb of Beirut, which is considered Hizbullah's home base. Since the 2006 Hizbullah-Israel war, the two sides implicitly established post-conflict rules of engagement that aimed to prevent any direct attacks along the borders or inside Israeli or Lebanese territory; all reconnaissance and military capacity building efforts would not elicit any response. The Beirut attack undermined this equilibrium, putting pressure on Hizbullah to prevent Israel from establishing new rules of engagement.

What is the Israeli strategy here?

The proximity of the strikes to the hotly contested Israeli elections on 17 September has led to speculation that the attacks were an electoral ploy to boost Prime Minister Binyamin Netanyahu's chances. Netanyahu is facing the toughest fight of his political life and is fighting aggressively in the domestic arena, but he is unlikely to let his electoral fate shape actions toward Iran—the paramount foreign policy and security issue in Israel. The prime minister took the unusual step of briefing his main opponent, retired General Benny Gantz, about the latest security developments, despite being under no obligation to do so. While Gantz questions Netanyahu's integrity and motives at every turn, he has refrained from criticizing the recent Israeli attacks. A tough policy toward Iran remains one of the few areas of consensus among all major politicians in Israel. At most, the election may have influenced Netanyahu's decision to allow the military to publicly talk about the attack in Syria, although even that was a routine disclosure given the circumstances.

Instead, the primary motivation for Israel's recent actions appears to have been an assessment that the value of the targets made them worth risking an escalation of regional tensions. The drone strike in Beirut apparently was aimed at components that would allow Hizbullah to domestically produce precision-guided missile systems. Israeli security officials have long been alarmed at the prospect that Hizbullah's 100,000-plus missiles and rockets could be upgraded or replaced with systems capable of accurately striking specific political, military, and economic sites. Some security officials believe that precision-guided missiles should be included in the “Begin Doctrine,” Israel's policy of pre-emptively striking adversaries seeking to obtain nuclear weapons. Israeli military and intelligence agencies likely saw the Beirut target as presenting a narrow window of opportunity to take direct action, despite the significant risk of Hizbullah retaliation.

What has been Hizbullah's response? What are the chances of a broader conflict?

The Shia Lebanese group fired missiles at an Israeli military border post on Sunday, prompting Israel to return fire with attack helicopters and artillery. No casualties were reported, and the short exchange was likely initiated by Hizbullah to warn off Israel from further strikes deep in its territory. Hizbullah leader Hassan Nasrallah is probably not interested in starting a destructive war, especially given Lebanon's precarious financial position, and his Iranian backers will not push for an escalation at a time when they have shown some interest in exploring French-led efforts to revive the nuclear agreement.

Lebanese Prime Minister Saad Hariri had carefully calibrated his position to call the Israeli strikes an attack on Lebanon, which implicitly provided cover for Hizbullah to act while giving him some authority to influence the scope of its retaliation. Hariri is probably concerned that recurrent Israeli attacks would undermine his country's political and financial stability. While Hizbullah's retaliation involves risks, an endless campaign of Israeli attacks inside Lebanon would be much more damaging to Hariri's financial rebalancing plans and efforts to revive the economy.

From Israel's perspective, an retaliatory action that produces no casualties does not require a muscular response. In fact, the equilibrium on the Lebanon front broadly serves Israeli interests, and undermining Hizbullah's missile development program can be done through attacks in Syria. Despite significant miscalculation risks, war on the Lebanese front remains unlikely.