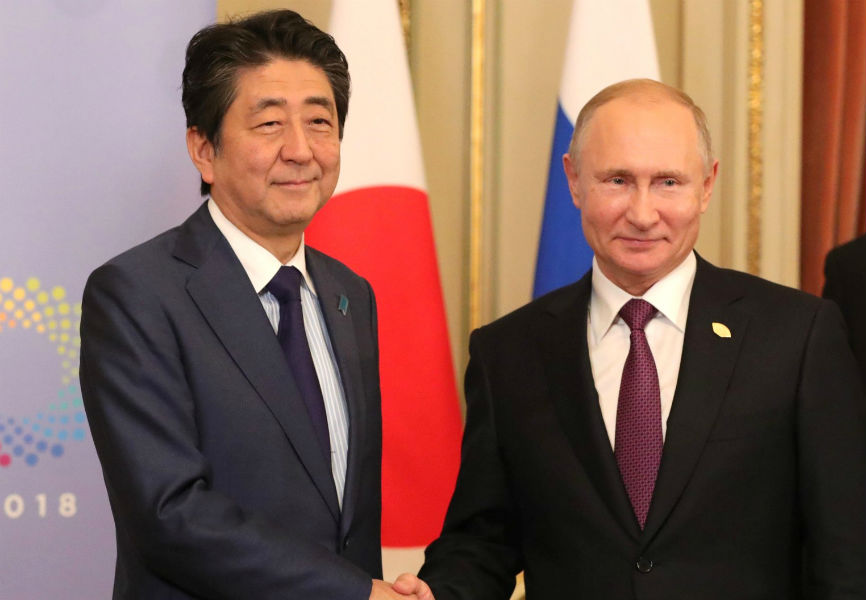 Putin and Abe meet at G20 meeting in Buenos Aires on 1 December 2018. Russian government photo.
Russian President Vladimir Putin and Japanese Prime Minister Shinzo Abe are not likely to make meaningful progress toward a peace treaty and resolution of their territorial dispute at their meeting Tuesday in Moscow. As Eurasia Group experts Alex Brideau and Scott Seaman explain, while both leaders hope to derive benefits from improving relations between their two countries, there are major obstacles to completing a major diplomatic deal anytime soon.
What does Abe hope to get out of the meeting?
For Abe, the meeting with Putin provides an opportunity to highlight his commitment to concluding a peace treaty and resolving the two countries' longstanding territorial dispute over the Northern Territories/Southern Kuril Islands. While the meeting will likely end without Abe having made much progress toward that goal, he can still claim that it helped set the stage for the two sides to hammer out a “framework” for negotiations on both issues in time for the G20 summit on 28-29 June in Japan.
Abe sees improving relations with Russia as a way to tie up loose ends from World War II—a legacy he hopes to leave behind when he finally steps down as prime minister. Abe's father focused much of his time as Japan's foreign minister in the mid-1980s on strengthening ties with Russia, and Abe feels both a strong personal and professional duty to continue that work. Abe also believes that a closer relationship with Russia will help Japan hedge against the risk of China's rising influence as well as obtain support from Moscow for Tokyo's efforts to remain a key player in engagement with North Korea.
What does Putin hope to get?
Putin has for years sought to boost political and economic ties with Japan, as part of a broader outreach to countries in East Asia. China isn't going anywhere in its role as Russia's key regional partner. But Moscow has seen further Japanese investment, particularly in development of East Siberia and the Far East of the country, as something to pursue. Resolving the territorial and political issues could help move that forward.
But it's a longstanding question as to whether the costs to Putin of striking a deal with Tokyo could be higher than the benefits. The issue isn't of much importance for the majority of Russians but returning any of the islands could upset nationalist segments of society that normally back the president. It's not clear how Putin would sell a deal without igniting opposition from these groups. It's also far from certain that Japanese investment in the country would increase substantially with a resolution of the political disputes. US and EU sanctions against Russia and other concerns for Japanese companies limit what Moscow should reasonably expect in terms of new investment.
What are the prospects for a deal on the Kuril Islands dispute and why has is it festered for so many years?
The outlook for a resolution to the conflict in the foreseeable future is bleak. The two sides will continue to squabble over how to interpret and fully implement the Japan-Soviet 1956 Joint Declaration on which Abe and Putin reportedly have agreed to base talks. The main bone of contention is a stipulation in Article 9 that Russia will “transfer” two of the islands to Japan after signing a peace treaty. Japan wants to reverse this sequencing or at least cut a deal on both issues simultaneously as well as secure the return of all four islands. Russia sees no urgent need to accommodate Japan on either point.
Efforts to discuss—let alone put to rest—these and other vexing problems in the bilateral relationship have long been hampered by objections posed by the Soviet Union and now Russia to Japan's security alliance with the US. Cold War politics made it extremely difficult for either Moscow or Tokyo to see each other as anything other than strategic competitors with dubious intentions. Nationalist sentiment in both countries has also reduced the room leaders have to compromise, and the thousands of Russians now living on the disputed islands further complicate Japan's plans to get the territories back.

What is the Open Skies Treaty and why does it matter that Trump pulled out of it?
SUBSCRIBE TO SIGNAL
LOUD WORLD. CLEAR SIGNAL. Signal is a newsletter on international affairs produced by GZERO Media four times a week. No jargon, no nonsense, no noise. Signal is a product of GZERO Media, a Eurasia Group company.