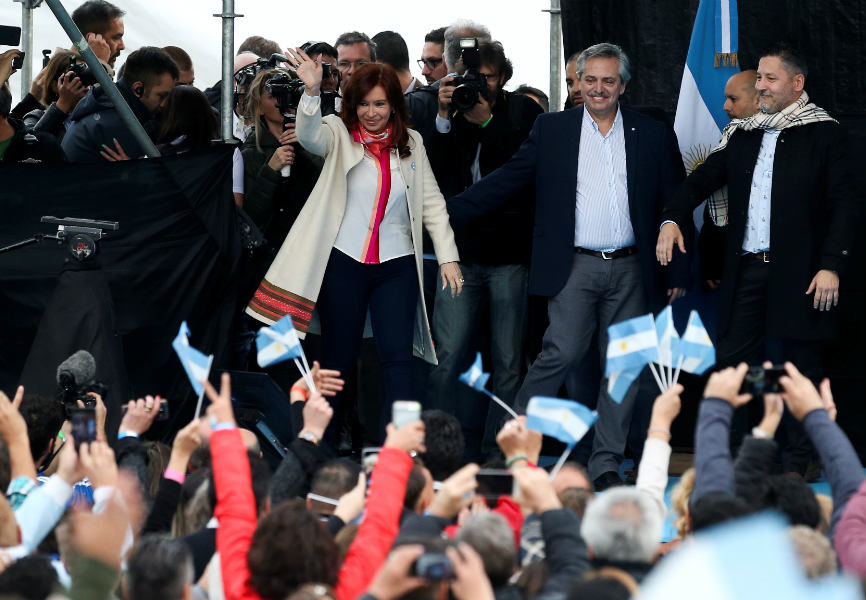 Argentina's President-elect Alberto Fernandez and former President and Vice President-elect Cristina Fernandez de Kirchner at a rally. REUTERS.
It's never a good sign when a country's central bank tightens capital controls just hours after a national election. But when that country is Argentina, it's not exactly surprising, either.

One in 10 Argentines today can't find work. More than one-third are impoverished. In a country not generally known for fiscal discipline, reform-minded President Mauricio Macri had good intentions to fix the country's finances but lacked the political support to do so. He was eventually forced to seek a major $57 billion aid package from the International Monetary Fund (IMF), but that was mismanaged, aggravating the country's already dire economic situation; just 40% of Argentines voted to reelect him. Alberto Fernandez—his leftist opponent, who received 48% of the vote—will replace him on 10 December. He will be accompanied by his vice-presidential running mate, former President Cristina Fernandez de Kirchner (CFK).

When her second presidential term ended in 2015, CFK was presiding over a country with rampant political corruption and an economic situation pointing seriously south, but one that had yet to fully develop into a crisis. She remains beloved by millions for her generous welfare policies (which the country was ultimately unable to afford). Fernandez served as CFK's chief of the Cabinet of Ministers for her first seven months in office but was always considered the more practical politician of the two. Following CFK's presidency, they headed separate wings of their Peronist movement, refusing even to talk to each other. Then CFK approached Fernandez with a deal—if he would run for the country's presidency, she would serve as his VP, delivering the votes he needed to unseat Macri.

It was a bargain Fernandez couldn't refuse. Now comes the hard part. Fernandez has two distinct challenges ahead of him; the first is the country's looming credit crunch, which if left unaddressed would lead to its ninth sovereign-debt default. To avoid that fate, Fernandez has to play ball with the IMF, an institution widely reviled in Argentina given its history of demanding austerity measures in exchange for financial lifelines, and which Fernandez criticized on the campaign trail. But Fernandez doesn't have many good options. Without support from the IMF, no foreign investors would touch the country, especially now as there's talk of trimmed repayments—a so-called haircut—on existing Argentine bonds. Macri cut public spending in order to bring the country's finances in line with IMF demands; Fernandez just vowed to increase public spending.

The second concern is the person who propelled Fernandez to the presidency. CFK, who currently faces multiple charges of corruption, is one of the most divisive political figures in Argentina. While her presence on the ticket secured the presidency for Fernandez, he underperformed relative to polls, which may be explained by voters' wariness of reelecting CFK to a position of power. (Fernandez was also unable to secure a majority in the lower house of parliament.) More concerning still, Kirchner has her own political base and influence network, which could complicate Fernandez's ability to govern if he doesn't manage the relationship properly.

Fed up with the past four years of economic struggle, Argentine voters made their decision. Macri should take heart—in Argentine politics, there is such a thing as second chances. It remains to be seen what Fernandez and CFK will do with theirs.

This article originally appeared in the 11 November 2019 issue of TIME. To learn more, read Argentina poised to swing left again in Sunday's election and Argentine primaries will test presidential frontrunners amid a polarized environment. Also watch Argentina is entering into a delicate situation, says Eurasia Group's Kerner and IMF won't be happy with Argentina under Fernandez, Eurasia Group's Bremmer says, and and look at Politics in Pictures: a visual guide to Argentina.

Argentina is entering into a delicate situation, says Eurasia Group’s Kerner
SUBSCRIBE TO SIGNAL
LOUD WORLD. CLEAR SIGNAL. Signal is a newsletter on international affairs produced by GZERO Media three times a week. No jargon, no nonsense, no noise. Signal is a product of GZERO Media, a Eurasia Group company.