Argentine primaries will test presidential frontrunners amid a polarized environment 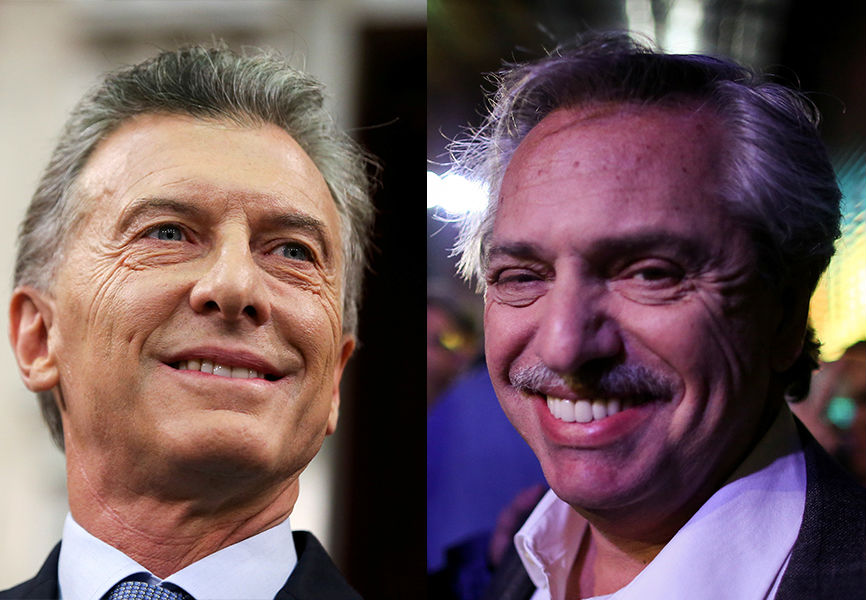 Argentine President Mauricio Macri and presidential candidate Alberto Fernandez. REUTERS.
Amid deep political divisions and continued economic turmoil, Argentines will vote this Sunday in the presidential primaries ahead of October's general elections. As is custom, the main parties have already chosen their nominees for the presidency and other federal offices, so Sunday's vote will serve as a dry run in which these candidates' relative strengths are first tested. As Eurasia Group experts Daniel Kerner and Ana Abad explain, the presidential contest is shaping up to be a tight race between President Mauricio Macri, a market-friendly reformer, and Alberto Fernandez, who to an extent represents the history of heterodox policymaking in Argentina.

What's at stake in the primaries?

Buoyed by a stabilization in economic conditions, Macri has been recovering recently in opinion polls, though he continues to trail Fernandez. Macri is hoping that if he is not able to win more votes than his rival in the primaries, the result is at least close. Key to watch will be the thresholds needed to win a presidential election in the first round on 27 October. A candidate needs to obtain either 45% of the vote or 40% with a ten-point difference over the nearest challenger to win the presidency outright in the first round. If Fernandez were to win such a large percentage of the vote in the primaries, that would signal he might be too far ahead for Macri to catch him before October. It would also spook investors, likely causing fresh economic deterioration, which would further undermine Macri's candidacy.

Who is the frontrunner in the presidential contest?

A close primary result or one in which Macri comes out slightly ahead would put the president in a good position to win October's elections. Under the terms of an International Monetary Fund (IMF) bailout, the multilateral lender has allowed the Argentine central bank to intervene in currency markets if needed, bringing some stability to the peso. That has helped bring inflation down, and there are signs that the decline in economic output might have leveled off. These trends, combined with efforts by the government to push policies that boost consumption and real income, are expected to remain in place in the months ahead and, as the state of the economy is voters' top concern, continue to help Macri. Moreover, incumbents enjoy a huge advantage in Latin American presidential systems. Since the region transitioned to democracy in the 1980s, only two have lost reelection (in Nicaragua in 1990 and in the Dominican Republic in 2004). But Macri is a vulnerable incumbent given discontent with economic conditions and a still fragile macroeconomic environment in an extremely competitive contest.

Why has Macri stumbled in his first term?

The government mostly blames the previous administration and a challenging external environment for the country's economic woes, while its critics point to its own policy mistakes. Not surprisingly, it is a combination of the three that explains the crisis. Macri took office in 2015 generating a great degree of market enthusiasm, but he inherited an economy with deep problems. It had basically stagnated since 2012, inflation had been in double digits since 2005, fiscal and external accounts were in the red, and the country was in default. Macri promised a quick recovery, but making the necessary adjustments was going to be politically painful, leaving the president little room to maneuver.

Macri had somewhat unexpectedly won the 2015 election and only by a tight margin, while his Cambiemos coalition lacked majorities in congress. He felt his political survival depended on minimizing the political cost of the adjustment by taking a gradual approach. The government took advantage of the enormous appetite for Argentine debt and began an aggressive process of debt issuance to finance the transition toward equilibrium. This required patience from investors.

In other areas, particularly improving fiscal accounts, not much adjustment happened. Macri underestimated how slow the process could be given the country's macroeconomic problems, and the damage done tot he country's reputation over past crises. In addition, he opted for a decentralized management model that was probably best suited for a more stable economy. This led to disagreements and to bad decisions, including at times poor management of fiscal and monetary policy, that further aggravated the country's problems.

Investors were patient, but a shift in global conditions closed Argentina's access to international markets just when the worst drought in decades hit agricultural production, leading to a reduction in much needed export revenue. Investor sentiment toward emerging markets soured after the US Federal Reserve raised interest rates in 2018. Argentina's weak fundamentals left it vulnerable to these sudden shocks. Macri ultimately sought a historic but controversial $56 billion agreement with the IMF and has doubled down on efforts to reduce the fiscal and external deficits. The adjustments that the government delayed in its first two years in office are happening inexorably and painfully.

A long-time ally and sometimes critic of the Kirchners, Fernandez is a skilled political operator who served as chief of staff for Nestor Kirchner—who died in 2010—and briefly for Fernandez de Kirchner, who remains a leading figure of the Argentine left with a solid electoral base. She is, however, a deeply polarizing politician because of her past populist policies, alleged role in a series of corruption cases, and confrontational approach with the media, especially the newspaper Clarin. She has rejection ratings of more than 50% and chose to run with Fernandez to expand her electoral base, unite her Peronist party, and potentially create better conditions to govern.

Fernandez is a pragmatic though not particularly charismatic candidate. The general perception is that, if elected, he would be able to counter Fernandez de Kirchner's worst impulses but would struggle to dispel concerns over her level of influence. Moreover, his views (and those of his advisers) still have a heterodox ring—some level of capital controls, increased foreign exchange market regulation, and a more active industrial policy. Still, the IMF deal and lack of financing will constrain how much both Fernandez and Macri can deviate from the current path.
EURASIA LIVE
EURASIA LIVE