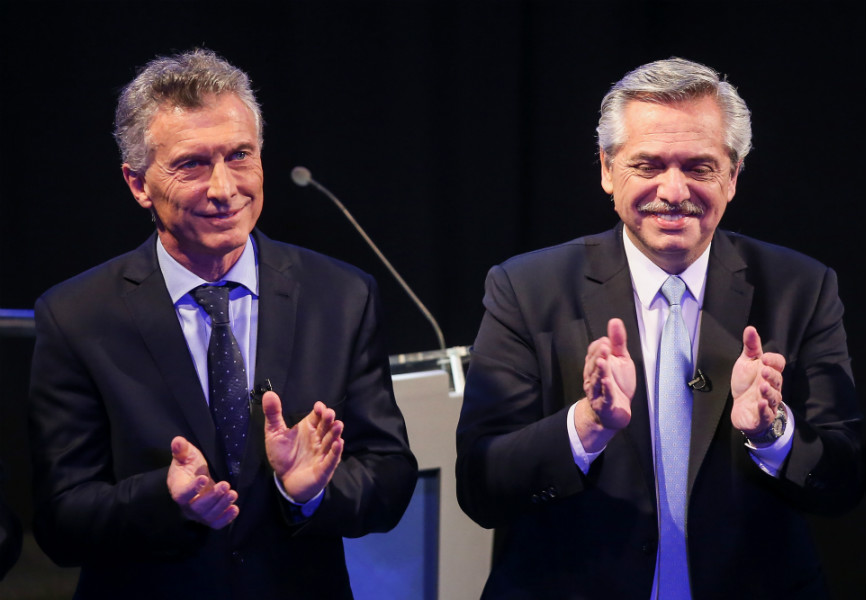 Who is Fernandez and why is he tipped to win?

Fernandez is the frontrunner after his strong performance in the 11 August primaries. To win outright in the election's first round on Sunday, he would need to obtain either 45% of the vote, or more than 40% with a ten-point difference. He obtained 49.5% of the vote (excluding invalid or blank votes) in the primaries, so he is well positioned to pass the 45% mark. The main factors behind the surge in his candidacy are a deep economic crisis and an erosion of confidence in the ability of President Mauricio Macri—a conservative, business-friendly politician who was initially greeted with enthusiasm by markets—to engineer a recovery.

A long-time ally and sometimes critic of the Kirchners—a husband and wife team who dominated Argentine politics for the decade before Macri came to power in 2015—Fernandez is a skilled political operator. He served as chief of staff for Kirchner, who died in 2010, and then briefly for Fernandez de Kirchner, before breaking with her over policy differences. But opposition to Macri and a desire to retake the presidency led to reconciliation and an agreement that Fernandez de Kirchner would serve as vice president. Fernandez is a pragmatic politician but is positioning himself as the leader of the moderate left who will lead an economic recovery. He will be independent of Fernandez de Kirchner but will still need to manage her influence. She remains a leading figure of the Argentine left with a solid electoral base but is a deeply polarizing figure.

How successful is Fernandez likely to be in tackling Argentina's economic crisis?

The post-electoral outlook will be extremely challenging, and Fernandez would be forced to make major decisions quickly, though a comfortable win would give him give ample political power. His plans are still being defined, but Fernandez believes Argentina's main problem is a scarcity of dollars with industries and the overall population demanding more than what the economy can generate. This would guide his actions in efforts to boost economic growth, reduce inflation, and manage a volatile currency. He would likely keep and even impose tighter capital controls, while seeking looser monetary and fiscal policy. He has also sent the message that he would actively attract investment in sectors like energy and mining, which he and his team believe can generate much needed dollars quickly.

Meanwhile, Fernandez also seems to be negotiating a pact with business and labor leaders to freeze consumer prices and raise wages over a period of time to anchor inflationary expectations, but this could be destabilizing. His success in office would ultimately depend to a great extent on his ability to manage relations with the International Monetary Fund (IMF), which has provided Argentina with a financial support package in exchange for economic reforms. Fernandez would likely take a tough stance toward the multilateral lender, as he sees it as being responsible for the current crisis. But if the IMF pushes back, economic conditions could worsen rapidly. Fernandez would also try to do a friendly renegotation with private bondholders, but this would not be easy, and a default is a real possibility. Eventually he would probably be pragmatic enough to accept the need to do tough adjustments needed to shore up the economy, but the path will be bumpy.

Why did Macri fail?

Macri mostly blames the previous Fernandez de Kirchner administration and a challenging external environment for the country's economic woes, while his critics point to his own policy mistakes. In truth, all three factors contributed. The economy had basically stagnated since 2012, inflation had been in double digits since 2005, fiscal and external accounts were in the red, and the country was in default. But Macri had somewhat unexpectedly won the 2015 election by a tight margin, and his Cambiemos coalition lacked majorities in congress. He felt his political survival depended on taking a gradual approach to dealing with the country's problems. The government took advantage of the enormous appetite for Argentine debt and began an aggressive process of debt issuance to finance the transition toward equilibrium, which required patience from investors.

In other areas, especially improving fiscal accounts, not much was done. Macri underestimated how slow the process would be given the country's macroeconomic problems, and the damage done to the country's reputation in past crises. In addition, he opted for a decentralized management model that was probably better suited for a more stable economy. This led to disagreements and bad decisions. Investors were initially patient, but a shift in sentiment toward emerging markets came just as the worst drought in decades hit agricultural production, leading to a reduction in much needed export revenue. Argentina's weak fundamentals left it vulnerable to these sudden shocks. Macri ultimately sought a historic but controversial $56 billion agreement with the IMF and doubled down on efforts to reduce the fiscal and external deficits. That created more economic pain for Argentinians and ultimately doomed his reelection chances.

To learn more, read Argentine primaries will test presidential frontrunners amid a polarized environment and Argentina faces choice between hard reforms and populism, watch Argentina is entering into a delicate situation, says Eurasia Group's Kerner, and look at Politics in Pictures: a visual guide to Argentina