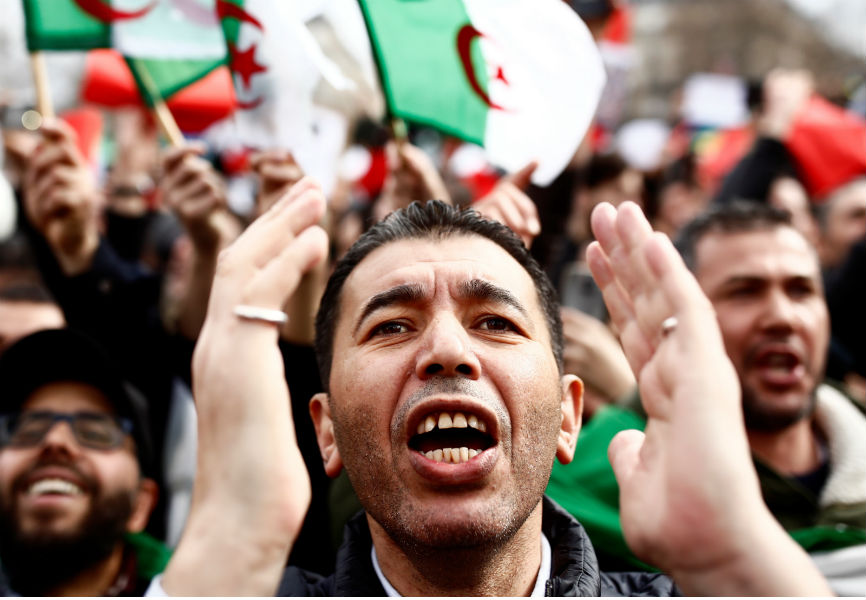 Demonstrators protest Bouteflika's decision to seek another term. REUTERS.
Unprecedented numbers of Algerians have thronged the streets in recent days to protest President Abdelaziz Bouteflika's move to extend his 20-year hold on power. Eurasia Group's Middle East and North Africa team explains the origin of the crisis and the pathway to a possible resolution.

What do the protesters want?

A fifth term for the 82-year-old Bouteflika, who suffered an incapacitating stroke in 2013 and has not addressed the public in five years, is a red line for many Algerians. Given that elections are tightly controlled and that there is no organized political opposition to speak of, Bouteflika is sure to win should the elections go forward as planned on 18 April. Many were already outraged when he ran in 2014, but this fifth term is perceived as an insult to broad segments of the population that view his political clan as corrupt and willing to do anything to protect its own interests. Though what may come next is unclear, many protesters are calling for a wholesale change to the système, a governance structure in which murky political-business alliances at the top thrive while the country's youth suffers from high unemployment and a lack of opportunities. The removal of Bouteflika is seen as a first step in that direction.

How has Algeria changed during the two decades Bouteflika has been in power?

Bouteflika was elected in 1999 during the final years of the Algerian civil war, a brutal guerilla conflict between Islamic groups and the military that left over 200,000 dead. During the initial years of his presidency, Bouteflika was credited with helping to bring about an end to the war, stabilizing Algerian politics, and overseeing a reconciliation process that saw many ex-militants reintegrated into society. As part of the process, he worked to raise national incomes through massive social spending programs made possible by rising oil prices throughout the early 2000s (government revenue as well as the broader economy are highly dependent on hydrocarbons). When prices fell in 2014, social spending and infrastructure projects were put on hold and many Algerians' economic prospects deteriorated sharply. Meanwhile, businessmen with close ties to Bouteflika's clan continued to prosper and discontent brewed among the wider population. This is especially true for Algeria, where people under 30 make up 70% of the population.

What options does the regime have to quell the unrest?

When faced with popular discontent in recent years, the Algerian government has defused them with a combination of repression and handouts in the form of increased subsidies and jobs and low-cost loans for young people. This was notably the case during the protests in 2010-2012, which were inspired by similar demonstrations across the Arab world. However, since 2014, government coffers have taken a heavy hit from low oil prices, so ramping up public spending to breathe life into a badly struggling economy is no longer an option. The unprecedented size and peaceful nature of the current protests also make harsh repression a risky move. The regime is loath to withdraw Bouteflika's candidacy, as the ailing president currently represents the only figure acceptable to all powerbrokers. Instead it has held out the prospect of a political transition after the election, though the lack of detail offered has so far failed to pacify the population. But more concessions combined with crowd-control measures and dire warnings of a return to instability could succeed in sapping momentum from the protests.

What role will the military play?

The military has been at the center of Algerian politics since the country's independence from France in 1962. Together with the intelligence services, it has played a role in managing (effectively deciding) all elections and presidential transitions since then. There are high ranking military officers both within and outside the inner circle of power, which is dominated by the presidency and Bouteflika's brother and special adviser Said, who is seen by many as the primary decision-maker since the president's stroke. The regime has worked hard to sideline any generals at risk of voicing dissent ahead of the upcoming election, but the military remains the only institution with the credibility and power to force a political transition. The balance of power behind the scenes still seems to be in favor of the Bouteflika clan, and while it is difficult to gauge what the military's top brass is thinking, it is clear that nothing can happen without its approval.

OPEC moves toward output boost
SUBSCRIBE TO SIGNAL
LOUD WORLD. CLEAR SIGNAL. Signal is a newsletter on international affairs produced by GZERO Media four times a week. No jargon, no nonsense, no noise. Signal is a product of GZERO Media, a Eurasia Group company.