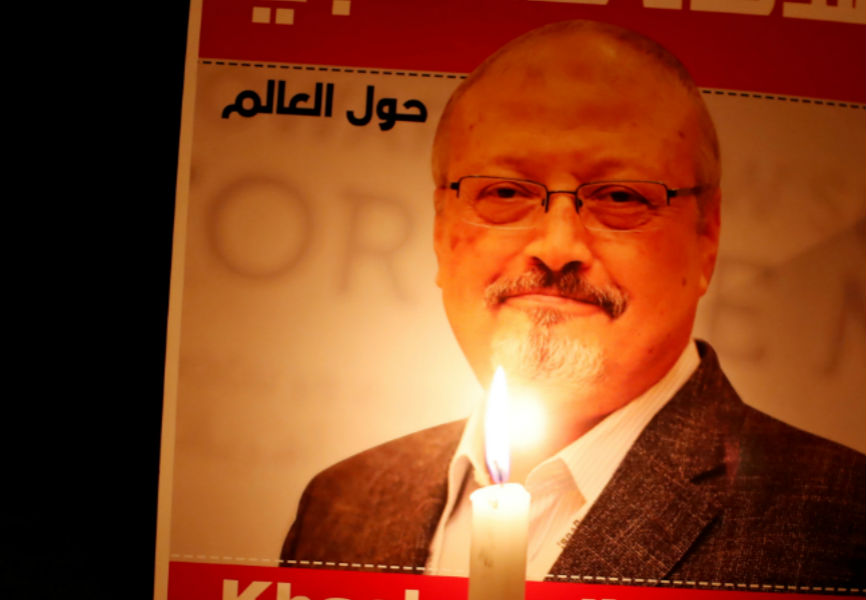 A demonstrator holds a poster with a picture of Saudi journalist Jamal Khashoggi outside the Saudi Arabia consulate in Istanbul, Turkey October 25, 2018. REUTERS/Osman Orsal
The Middle East's volatile politics continued to send shockwaves around the world this year. Eurasia Group expert Mylene Tisserant takes stock of 2018 and highlights the developments to watch in the region in 2019.

The fallout from the killing of journalist Jamal Khashoggi will continue to cause problems for Saudi Arabia in the coming year. It has greatly complicated the kingdom's relations not just with the US political establishment, but more broadly with all the Western governments that have been close allies of the Saudi regime. Turkey's President Recep Tayyip Erdogan will try to keep the spotlight on the killing carried out in the Saudi embassy in Istanbul while the Saudis conduct damage control. Still, the economic relationship between the two sides should survive the public saber-rattling. Domestically, the Khashoggi affair has shed new light on the character of Crown Prince Mohammed bin Salman, but a change in the line of succession is unlikely for now. His Vision 2030 program of economic reform will suffer, as the concerns raised by the affair will require more government largesse to ensure domestic stability. Moreover, foreign investors who had doubts about Saudi Arabia will now be even more reluctant to consider investments there.

What are the important political developments to watch out for in 2019?

The coming year will be an eventful one across the region. New fence-mending measures could be undertaken in the Gulf to rebuild the Gulf Cooperation Council after the damage done by the Qatar crisis. The rifts will take time to heal, but a moderation in Saudi foreign policy will allow for more pragmatic discussions on the points of discord. Another development to monitor is the renewal of US oil waivers on Iran sanctions in May. The EU's plan for a “special purpose vehicle” to bypass US sanctions would not, by itself, save the nuclear agreement, but it could help with trade in food and medicine, a small but important benefit for Iran. Israel will also be in the news with potential early elections and the presentation of a US peace plan, though the plan is unlikely to meaningfully advance peace negotiations between Israelis and Palestinians. Of note for North Africa: April's election in Algeria, in which ailing President Abdelaziz Bouteflika is likely to win his fifth term; Tunisian presidential and parliamentary elections in December; potential parliamentary and presidential elections in Libya; and a possible Egyptian referendum in mid-2019 to allow President Abdulfattah el Sisi to run for a third term in office.

Next year should bring more political stability. Saudi-Iran tensions will be contained, with Saudi authorities focused on maintaining domestic stability after the Khashoggi affair and Iran taking pains to remain in the nuclear deal. Political conditions will remain challenging in Iraq, but the new government will do its best to advance some economic overhauls. Lebanon will probably have a government in the coming months, which should pave the way for needed reforms to fight corruption and reduce the public debt, as well as for the release of funds pledged at the Cedar conference. Similarly, some regional conflicts could wind down in 2019, starting with those in Syria and Yemen. The latest consultations on Yemen in Sweden achieved the impossible by bringing together all the warring parties, creating momentum for a formal peace process in 2019. That said, the list of potential pitfalls and economic challenges for the region in 2019 is long. Vulnerability to oil price fluctuations, persistent geopolitical tensions between Russia and the US, tighter global monetary policy, and the deteriorating situation in Iran all pose risks.
SUBSCRIBE TO SIGNAL
LOUD WORLD. CLEAR SIGNAL. Signal is a newsletter on international affairs produced by GZERO Media four times a week. No jargon, no nonsense, no noise. Signal is a product of GZERO Media, a Eurasia Group company.