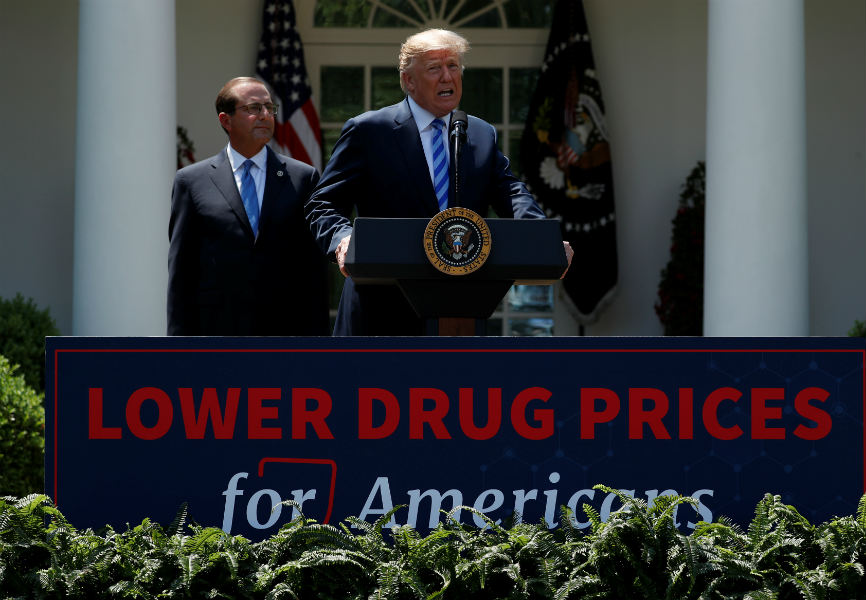 US President Donald Trump speaks about prescription drug prices at the White House. REUTERS.
In a bid to make tangible progress on the issue of lowering prescription drug pricing before the 2020 presidential election, the Trump administration is planning to import cheaper medicines from Canada and elsewhere. However, as Eurasia Group's Aditya Bhattacharji and Sandra Yamin Namoos outline, the proposed plan's impact on US drug prices stands to be negligible.

The Trump administration continues to struggle to demonstrate progress in lowering prescription drug prices. Even initiatives that appeared to have legs, such as reforms to the rebate system, have faltered. With healthcare surging as a dominant issue among Democratic challengers in the early stages of the US presidential campaigns, the administration is dusting off some of its more controversial proposals to make credible gains on the issue ahead of 2020. The proposed mechanism to import cheaper medicines from Canada and potentially other markets—the Safe Importation Action Plan—is one such “Hail Mary."

There are clear limits to the two pathways under the proposed mechanism. First, to alleviate legitimate concerns about product safety, the plan suggests that products imported from Canada would have to be analogous to FDA-mediated therapeutics in terms of both their composition and the methods by which they were produced. The challenges in quality assurance and supply chain integrity are monumental, particularly since some of the imported products may originate outside of Canada, and potentially from markets with more lax regulation. It is unclear how interoperable the US's evolving track-and-trace system would be with its foreign counterparts.

Moreover, Canada's own pharmaceutical market is both small and in the midst of flux, as the country explores changes to its public medicines benefits schemes, suggesting that Canadian producers might not even be able to produce meaningful quantities of eligible products. Their inclination to participate would be even less should domestic supply be insufficient, such as during a public health emergency.

Third, importation from Canada of biologics—which typically account for a greater share of value than volume and where significant cost savings could theoretically be possible—is not permitted under the US's proposed mechanism. Relatedly, it remains unclear how products such as insulin (a target for social and political scrutiny due to its pricing in recent years) would be regulated.

Fourth, the US administration's strategy to have firms import medicines at lower costs has programmatic risks associated with it—namely, that it would be an “opt-in” program that has historically not enjoyed rhetorical support from industry. There is also precious little data to support the notion that states would partake and that doing so would address the US's prescription drug cost woes. Such discussions have taken place at the state level for years, with only Vermont finally following through in May 2018. From what little information is publicly available, enthusiasm for this model waned after a congressional report at the end of 2018 indicated savings would only amount to 3.8% of Vermont's total drug spending tab.

All told, the result of this highly constrained plan is a Venn diagram with a very small shaded area. But while this development is unlikely to trigger significant changes in the US pharmaceutical landscape, it is one more data point highlighting that, no matter who occupies the White House after 2020, the fusillade facing drug makers is highly unlikely to ease.