Eurasia Group | Taiwan president touches down in US at sensitive moment

Taiwan president touches down in US at sensitive moment 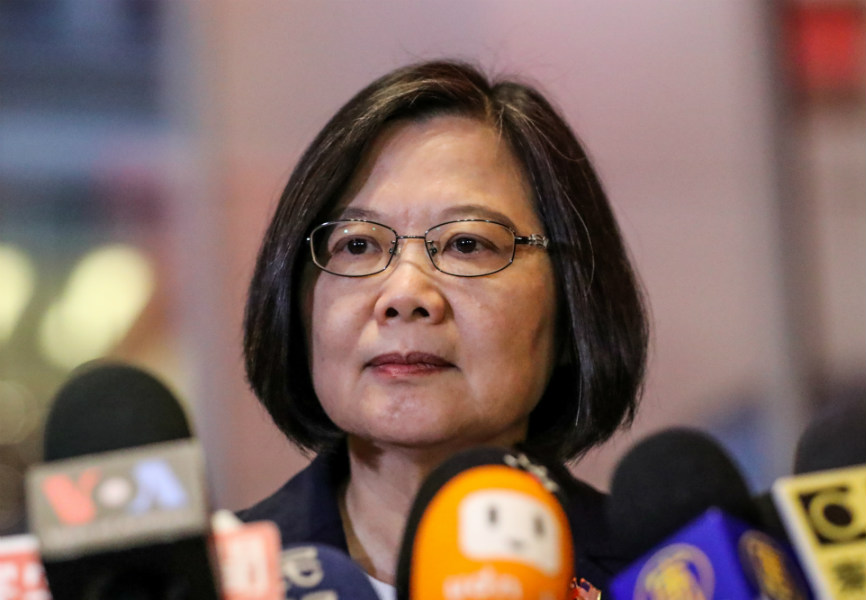 Taiwan President Tsai Ing-wen in New York. REUTERS.
Taiwan President Tsai Ing-wen will stop over in Denver, Colorado on Friday on her way back from a visit to several Caribbean nations; she had stopped off in New York a couple weeks ago on her way there. A visit by a Taiwan leader to the US always sets off tensions with China, which sees the island as an integral part of its territory. Tensions are running even higher this time, as Eurasia Group expert Kelsey Broderick explains.

Why is Tsai visiting the US now?

Tsai's stop in the US is tied to her trip to visit four of Taiwan's 17 diplomatic allies, countries that recognize Taiwan as a sovereign nation. Most other countries in the world recognize China instead of Taiwan, though some of them, including the US, maintain unofficial government relations with Taiwan. On her way to visit Haiti, Saint Kitts and Nevis, St. Vincent and the Grenadines, and Saint Lucia, Tsai stopped in New York City, where she was met by pro-Taiwan and pro-Beijing demonstrators. Her itinerary included a speech at Columbia University, a reception with permanent representatives to the UN, and a Taiwanese-American business summit. On her way back Friday, Tsai will stop over in Denver, where she will hold a news conference and have dinner with local officials. Earlier this year, a group of Republican senators had asked House Speaker Nancy Pelosi to invite Tsai to give an unprecedented address to Congress; however, the risk of Chinese retaliation for a visit to Washington, DC, was likely too high for both Pelosi and Tsai.

Why is this visit particularly sensitive?

It comes just after the US announced a $2.2 billion arms sale to Taiwan. To express its disapproval, Beijing announced that it will sanction the US companies involved. China has threatened sanctions before, but the odds of it following through this time are higher given the deterioration in US-China relations amid the trade war. The last time Tsai transited through the US as president, China responded by persuading one of Taiwan's Latin American allies to shift its recognition from Taiwan to the government in Beijing, but this time it has (so far) been more cautious given the sensitivities around Taiwan's 2020 presidential election. China hopes Tsai's challenger Han Kuo-yu will win because he recognizes the 1992 consensus, an unofficial agreement between China and Taiwan that there is only “one China,” although with a different interpretation than Beijing. China is likely worried that taking overly aggressive action will anger Taiwan voters and give the more independent-minded Tsai a chance to highlight China's destabilizing behavior. Already, Tsai's popularity has benefited from speaking out in favor of the recent Hong Kong protests.

What is the aim of China policy toward Taiwan?

China's ultimate goal for Taiwan is reunification with the mainland. Like Hong Kong, Beijing has offered Taiwan a “one country, two systems” model wherein Taiwan's social system, private property, and religious beliefs among other freedoms would be protected. In a speech on Taiwan in January, Chinese President Xi Jinping noted that although China hopes to achieve reunification peacefully, it will not pledge to renounce the use of force to reunite the two sides of the strait. In the short term, China's goal is to start consultation with the Taiwan government on the issue of reunification, but only with a government that recognizes the 1992 consensus. Under Taiwan's current government, which does not recognize the 1992 consensus, China's policy has been focused on isolation and punishment. By peeling off allies, convincing multilateral organizations to kick Taiwan out, and taking action that alters the status quo—for example, opening a new flight path in the strait—China hopes to give the people of Taiwan the impression that their only option for survival and prosperity is to work with China.

What is the aim of US policy toward Taiwan?

After the US switched diplomatic recognition from Taipei to Beijing in 1979, US-Taiwan relations have been officially governed by the Taiwan Relations Act, which obliges the US to provide defensive arms to Taiwan, reserves its right to resist any force that would determine the future of Taiwan by non-peaceful means, and commits it to promoting commercial and cultural relations with Taiwan. These policies are intended to provide strategic ambiguity, increasing the risk to China of a potential military takeover. These commitments are also grounded in the US's own strategic interests, including supporting foreign democracies and limiting China's access to the Pacific Ocean. Every US administration since 1979 has pursued different levels of engagement with Taiwan depending on its ideological commitment to the island and perception of China risk. Despite early flirtations with closer engagement with the island, President Donald Trump has not moved away from the basic US policy. He has, however, signed legislation that encourages high-level contact with Taiwan and gives leeway to pro-Taiwan White House and cabinet officials to pursue additional actions, including arms sales and support for Taiwan's defense industry.

Read about US-China in our Top Risks for 2019 report.