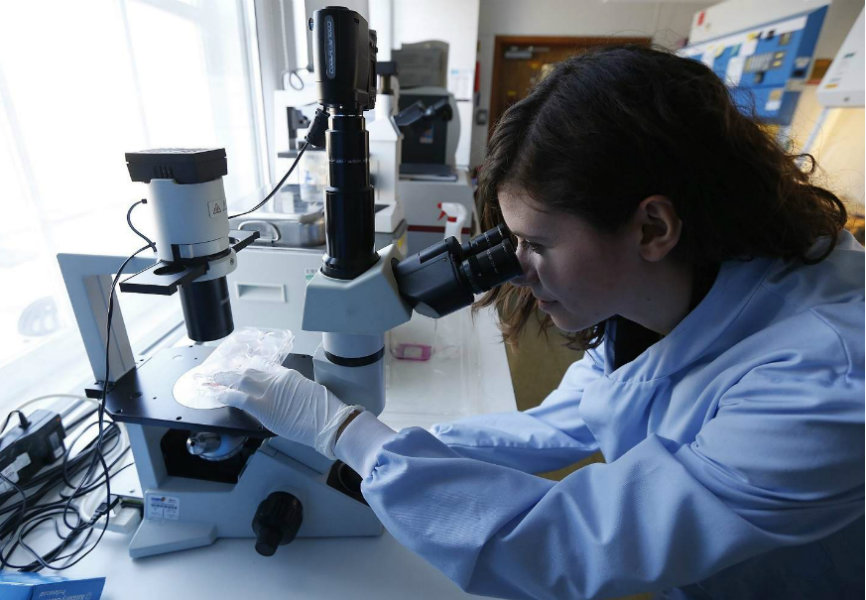 A graduate student at UCL’s School of Pharmacy in London. REUTERS.
Within the pharmaceutical space, Eurasia Group's Aditya Bhattacharji expects politics to drive significant changes in regulatory and legal affairs. He explains how the evolving dynamics can be characterized by two themes.

The status quo is highly unlikely to hold in the regulatory space. The growing and largely uncharted nexus between healthcare and technology will be a key driver of change, as players in both verticals seek new growth areas, and governments look to technology to address critical shortfalls posed by fiscal constraints and human capital shortages. The result will be a steady drumbeat of progress on new therapeutics—from genomic and curative treatments to sensor-enabled “smart” pills—for which regulators will have to develop new guidelines that appropriately balance safety and innovation.

Governments may also default to regulatory action as a preferred mechanism for addressing healthcare system shortfalls, particularly in environments where gridlock makes a legislative approach infeasible. That trend is expected to grow in a more politically polarized environment—think of the unwieldy coalition governments that are emerging across markets as disparate as Italy and Brazil. For pharmaceutical firms, we are cautiously optimistic that the outcome will be a positive one (but with associated risks highlighted in the section that follows), as regulators across the board implement fast-tracking mechanisms to usher more products to the shelves, therefore spurring competition, reducing prices, and thereby improving access.

Regulation is also expected to expand in scope geographically, as responsibility for healthcare devolves from central governments and legislative bodies to other actors, whether in a concerted or de facto fashion. The US is already becoming a prime example of these phenomena; political intransigence has helped empower agencies such as the Department of Health and Human Services to tackle pressing issues such as drug pricing, and political wrangling over the validity of the Affordable Care Act has now spilled over into the judiciary. Moreover, absent cohesive federal guidance, states, and even cities, are playing a larger role in the pharmaceutical space, through novel medicine importation schemes, pricing transparency initiatives, and efforts to address climate change. Similar dynamics will play out in emerging markets, such as China, India, Indonesia, Brazil, and Saudi Arabia.

From bench to … bench

In addition to purely regulatory matters, legal issues are poised to mount, particularly in a few areas.

First, a raft of new products amidst the potentially more permissive regulatory environment outlined above could set the stage for an increase in the scope of adverse events and associated product liability issues. The reputational consequences could be especially damaging in a more nationalist and populist climate, where politicians are more likely to use this as pretext for protectionist industrial policy, and where civil society groups may seize on it to drive the narrative against industry's pricing and value to society.

Second, intellectual property is likely to come under fire in a more sustained fashion. The proliferation of the life sciences as a strategic sector creates pressures for multinationals to invest locally, often through partnerships with local firms that involve technology transfer. Moreover, intellectual property broadsides may be used by governments as a tool to reduce product prices (eg, Labour's support for issuing compulsory licenses in the UK). The risk of such measures increases in an environment where novel therapeutics become more costly and potentially out of reach for patients.

Last, labor issues are bound to become more pronounced. Despite ample political will behind healthcare reforms, efforts to develop tomorrow's workforce are lacking. With increased demand on healthcare systems, this dynamic will not hold and likely spells increased tensions between healthcare unions and their employers. Access to talent in the life sciences will also be an issue, particularly with trade and immigration sentiment swinging in a more restrictive direction.

Bremmer says Trump will lose popular vote but can still win in November
SUBSCRIBE TO SIGNAL
LOUD WORLD. CLEAR SIGNAL. Signal is a newsletter on international affairs produced by GZERO Media four times a week. No jargon, no nonsense, no noise. Signal is a product of GZERO Media, a Eurasia Group company.