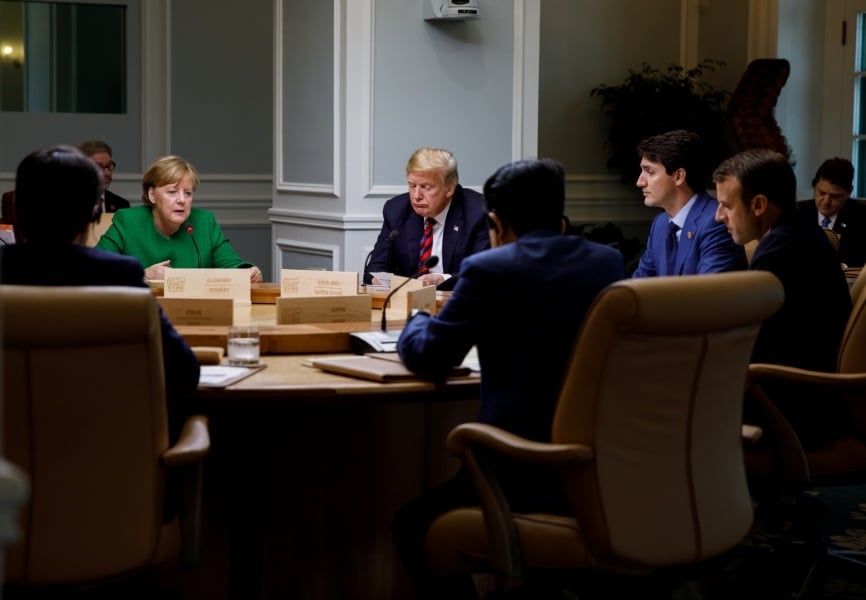 German Chancellor Angela Merkel, US President Donald Trump, Canadian Prime Minister Justin Trudeau, French President Emmanuel Macron, and Japanese Prime Minister Abe Shinzo at the 2018 G-7 Summit in Canada. REUTERS.
President Trump's plans to host a summit of leaders of the G-7 group of industrialized nations this month was put to rest when German Chancellor Angela Merkel waved him off. Coronavirus concerns made it impossible for her to confirm her attendance, she said. Trump then announced the gathering would be delayed until September, and if the story had ended there, it wouldn't have made much news.

But this was not going to be an ordinary G-7 summit. Instead, the US president also announced plans to rewrite the guest list. “I don't feel that as a G-7 it properly represents what's going on in the world,” Trump told reporters. “It's a very outdated group of countries.” He has a point. Gone are the days when the US, the UK, France, Germany, Italy, Japan and Canada could credibly claim to represent the world's advanced economies, much less to set an international agenda. The rise of China, in particular, but also the emergence of countries like India, South Korea, Brazil, Russia, Turkey, and others have long made the G-7 look like a country-club board meeting.

Trump's solution: expand the group. “We want Australia, we want India, we want South Korea,” Trump told reporters. “That's a nice group of countries right there.” As host of this year's summit, the president has the right to send an invite to whomever he wants. But Trump was proposing what he called a “G-10 or G-11,” a permanent expansion of the group. He has no power to do that by himself.

So, what's the thinking behind the choice of those countries? An invitation to Indo-Pacific democracies India, South Korea, and Australia is an attempt to confront and isolate China. If the G-7 is an institution designed to promote democracy; freedoms of speech, assembly and religion; and free-market capitalism, then that idea makes good sense. China has emerged over the past 30 years as the world's most powerful police state, and its international influence now extends into every region of the world. An alliance of democracies designed to promote and defend democratic values and individual freedoms might be a worthy goal.

Unfortunately, Trump's plan won't work. First, the president also wants to include Russia. You might recall that Russia was invited to join the G-7 in 1997 but was ousted in 2014 in response to its invasion of Ukraine.

Vladimir Putin has since made Crimea part of Russia, undermining any support in Europe for Russia's reinclusion in an alliance designed to promote and protect democracy. Trump's call for Russia's return was immediately rejected by both Britain and Canada. If the G-7 summit is held in the US in September and Russia is invited as a nonmember, prepare for the spectacle of a smiling Putin waving to cameras on the eve of a US election.

Then there is the problem of Trump as messenger. The president's response to ongoing civil unrest in the US—including his threat to use “vicious dogs” and the US military against protesters—undermines his case against China. In this way, he's made China's latest messaging much easier. Hong Kong's Beijing-backed chief administrator pushed back hard on US criticism of China's bid to impose a Beijing-sanctioned political order on the city: “There are riots in the United States, and we see how local governments reacted. And then in Hong Kong, when we had similar riots, we saw what position they adopted.”

There are good counterarguments to make to that, but President Trump is the wrong leader to make them.

This article orginally appeared in the 15 June 2020 issue of TIME. Learn more: 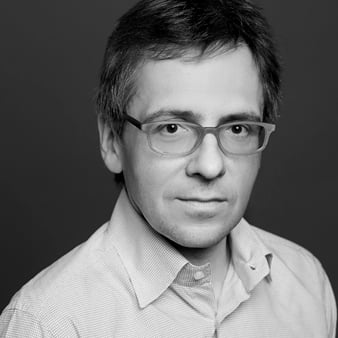