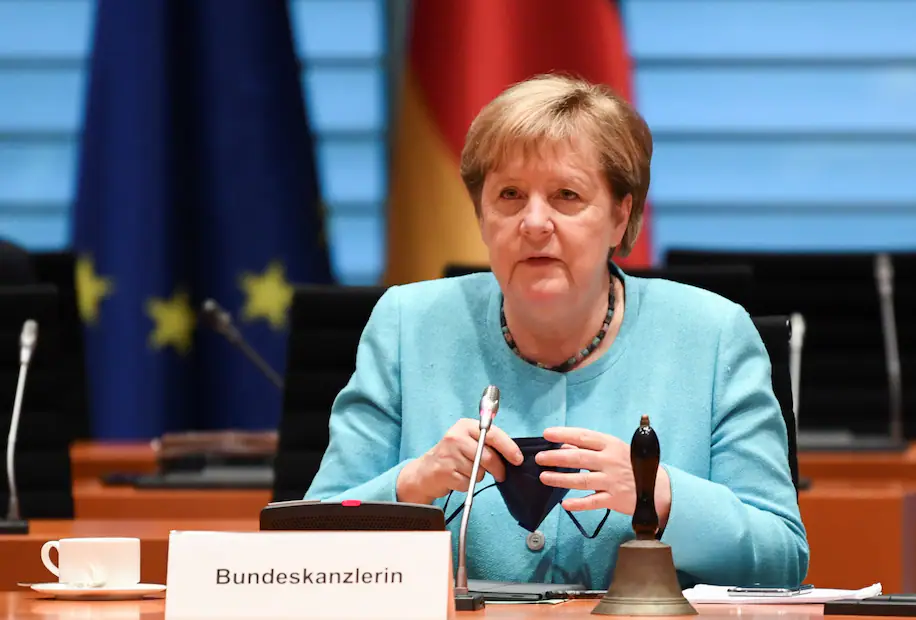 German Chancellor Angela Merkel is pictured at a cabinet meeting in Berlin on July 14, 2021. (Annegret Hilse/Reuters)

German Chancellor Angela Merkel will visit President Biden at the White House Thursday for discussions on a host of outstanding economic and foreign policy issues, with little likelihood that any of them will be settled.

Instead, what is characterized as a “working” trip will be an opportunity to reaffirm close bilateral ties and to underline what a senior German official called “the continuity and importance of the relationship” as Merkel prepares to step down following September elections after 16 years in office.

Biden has made mending fences with Germany, and with Merkel in particular, a high priority after four years in which President Donald Trump made her the target of many of his complaints about Europe. Although they met during last month's Group of 7 and NATO summits, she is the first European head of government to travel to Washington since Biden took office.

The two will hold a joint news conference after an extended bilateral meeting, and Biden will host a dinner for Merkel to end her brief trip, one of the few she has made during the pandemic.

Both Afghanistan and Iran will be on the agenda, with Merkel seeking U.S. answers on a security plan allowing Kabul's international airport to remain open.

Talks on U.S. reentry into the Iran nuclear deal are in a lull — and it remains unclear whether an agreement can be reached — with no new negotiating session scheduled, following presidential elections in Iran.

Germany, Britain and France, all signatories to the pact, have acted as intermediaries for indirect negotiations between Tehran and Washington.

Merkel and other European leaders are under pressure at home to seek U.S. reciprocity on the European Union's decision last month to allow Americans to travel to its 27 member nations. Most Europeans are still blocked from U.S. travel.

Biden, however, is expected to defer to pandemic working groups here that have not yet made a decision on the subject.

The Nord Stream 2 natural gas pipeline remains a major issue between the United States and Germany, although neither side is looking for conflict during the visit. The pipeline, more than 90 percent complete, will bring Russian natural gas to German customers. The United States has long opposed the project, arguing it would give Moscow leverage over Germany in a crisis and weaken Ukraine, which earns about $1 billion annually from a separate pipeline that Russia might stop using. Merkel insists Nord Stream is simply an economic transaction.

“It's a bad deal,” a U.S. official said, describing the pipeline as a “geopolitical Russian project that we believe threatens global security and undermines Ukrainian security . . . The president will raise his concerns about Russia using energy as a weapon.” The official was one of several U.S. and German officials who spoke on the condition of anonymity to discuss closed-door talks during the visit.

Some German officials have suggested that the pipeline might not immediately be made operational once completed, since its additional capacity is not yet needed, said Dan Hamilton, director of the Wilson Center's Global Europe program.

A senior German official agreed that a number of mitigation proposals remain under discussion, but both U.S. and German officials said no announcement is expected during Merkel's visit.

Biden may also seek to draw Germany into closer alignment with his stance on China. Merkel, while backing E.U. sanctions earlier this year over China's treatment of Muslims in Xinjiang, has been reluctant to encourage a broader confrontation with Beijing, emphasizing Germany's export interests.

A tit-for-tat exchange of sanctions between the E.U. and China in March led to the sidelining of a major E.U. investment deal with China that Merkel had prioritized. The “Comprehensive Agreement on Investment” is indefinitely delayed.

Aggressive Chinese responses have helped U.S. officials make the case that China is to blame for any souring in relations. But European and American views remain distinct.

“The task is easiest for Biden on clear values issues where the E.U. shares many U.S. concerns,” said Michael Hirson of the Eurasia Group, a former Treasury Department representative in Beijing. “Where push comes to shove is on coordination of trade and technology policies.”

At an E.U.-U.S. summit last month, the allies agreed on a new trade and technology council, designed to help shape global standards for digital innovations and to combat “China's nonmarket practices.”

The German leader also is likely to repeat her opposition to U.S. tariffs on steel and aluminum. European officials had hoped that Biden by now would have eliminated these vestiges of Trump's “America First” trade policy.

The president has signaled a willingness to eventually do so, but the two sides agreed in June only to defer action until December.

U.S. officials also expect a discussion on Biden's support for a World Trade Organization proposal to waive intellectual property protections on coronavirus vaccines. Merkel, and much of the rest of Europe, is opposed, arguing that countries most in need of vaccine doses would be better and more quickly served by more efficient distribution by countries where they are already produced.

Another potential source of division was eliminated earlier this week when E.U. officials delayed a planned digital tax that the Biden administration saw as aimed at U.S. Internet giants.

The issue has been deferred while the Group of 20 nations proceed with negotiations over a proposed global tax overhaul. Expected to conclude at the end of October, that ambitious undertaking would include Biden's proposed minimum corporate tax and new levies on digital companies in countries where they have significant sales, but no physical presence.