Macron warns Johnson ‘nothing is negotiable’ over Northern Ireland protocol 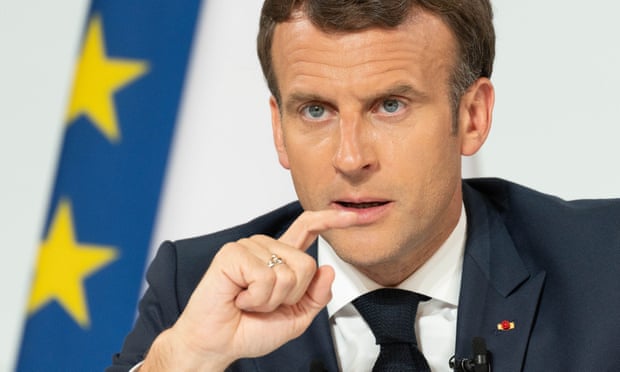 Talks on resolving the impasse over the implementation of the NI protocol collapsed without agreement earlier this week. Photograph: Jacques Witt/SIPA/REX/Shutterstock
The French president last night ramped up the pressure on Boris Johnson over the Northern Ireland protocol by insisting “nothing is negotiable” as the G7 summit of world leaders risked being overshadowed by the bitter standoff over Brexit.

In a defiant intervention as he prepared to travel to the UK, Emmanuel Macron warned Boris Johnson that France is not open to renegotiating any aspect of the protocol – and even appeared to raise questions about whether the UK could be trusted.

Asked about British demands for aspects of the protocol to be reworked, Macron told journalists at an Elysee press conference: “I think this is not serious – to want to have another look at something in July that was finalised in December after years of discussions and work.”

“We have a protocol,” he continued. “If after six months you say we cannot respect what was negotiated, then that says nothing can be respected. I believe in the weight of a treaty, I believe in taking a serious approach. Nothing is negotiable. Everything is applicable.”

His tough words came as Johnson was forced to play down divisions with US president Joe Biden, calling him “a breath of fresh air”, after it emerged that US diplomats had remonstrated with the UK's Brexit negotiator, Lord Frost, about the risk of tensions being inflamed in Northern Ireland.

Talks on resolving the impasse over the implementation of the protocol collapsed without agreement earlier this week, and Frost has accused the EU side of “legal purism” in its interpretation of the agreement. He is expected to join the summit on Friday.

Both Downing Street and the White House reaffirmed their commitment to the Good Friday agreement after the talks, and stressed the need for the standoff to be resolved jointly, between the UK and the EU.

But Johnson's official spokesperson made clear afterwards that didn't mean the UK was stepping back from the threat of taking unilateral action – such as invoking Article 16 of the agreement, to suspend the protocol. “We continue to keep all options on the table, because time is short,” the spokesperson said.

EU analyst Mujtaba Rahman, of consultancy Eurasia Group, said he now puts a 30% probability on the risk of an EU-UK trade war, in which he said the EU could retaliate by limiting UK fish exports and even interrupting the UK's electricity supply to Jersey and mainland Great Britain. He said an intervention by the G7 appeared necessary to resolve the situation. “All eyes are on Cornwall, as the relationship hangs on the precipice.”

The prime minister's spokesperson rejected Macron's comments, saying, “We are absolutely acting in accordance with what was agreed and what was set out.” He said the protocol had been agreed in “challenging circumstances”, and claimed the UK had already made more than 10 proposals for resolving the standoff, and “we are yet to hear back”.

“Our view is the EU continues to prioritise protection of the single market, even though there is very little risk to it.”

The prime minister insisted that discussions with Biden had been “very good” – though unusually the pair did not hold a joint press conference, instead giving separate statements on camera.

“There's no question that under President Biden there is a massive amount that the new US administration wants to do together with the UK, on everything from security, working together, protecting our values around the world together, but also on climate change,” the prime minister said. “So it's a big breath of fresh air. It's new, it's interesting, and we're working very hard together.

“One thing we all, absolutely want to do, and that is to uphold the Belfast Good Friday agreement, and make sure that we keep the balance of the peace process going. That's absolutely common ground, and I'm absolutely optimistic that we can do that.”

Biden was similarly effusive about what he called a “very productive meeting”, referring in his post-talks comments to the “special relationship” between the US and UK, a term of which Johnson is reportedly not a fan.

The pair exchanged gifts, with Biden giving Johnson a US-made bike, and the prime minister giving him a picture of the abolitionist Frederick Douglass, from an Edinburgh mural.

Earlier, Charles Michel, president of the European Council, who will meet Johnson in Cornwall alongside commission president Ursula von der Leyen, said it was “paramount to implement what we have decided” over Northern Ireland.

Johnson and Biden were all smiles as they greeted each other on camera before their talks, the location of which had to be moved to the conference hotel from St Michael's Mount, just off the Cornish coast, because of poor weather.

When Biden said the pair had both “married above our station”, Johnson replied: “I'm not going to disagree with the president on that or anything else.” He added that it was “fantastic” to see Biden.

While Brexit does not formally feature on the formal agenda, with Johnson telling Atlantic magazine recently: “We've sucked that lemon dry,” the US is concerned about Frost's tactics over the implementation of post-Brexit border checks in Northern Ireland.

Biden's national security adviser, Jake Sullivan, had hammered home Washington's message on the way to London on Thursday, telling journalists: “Any steps that imperil or undermine the Good Friday agreement will not be welcomed by the US.”

Labour's Louise Haigh, the shadow Northern Ireland secretary, said: “It is worrying on the eve of such an important summit that Boris Johnson's actions are isolating Britain from our strongest allies. The prime minister personally negotiated the protocol, so has a responsibility to make it work, and protect the precious Good Friday agreement.”

Other G7 leaders arrive tomorrow, and Johnson will hold bilateral meetings with his counterparts from Japan, Canada and Italy.

The leaders will hold their first formal summit session in the afternoon, covering the recovery from the Covid pandemic, before meeting the Queen for a reception at the Eden Project.
The Guardian
The Guardian

How Long Will Theresa May Wait to Trigger Article 50?
SUBSCRIBE TO SIGNAL
LOUD WORLD. CLEAR SIGNAL. Signal is a newsletter on international affairs published five times a week by GZERO Media, a Eurasia Group company.