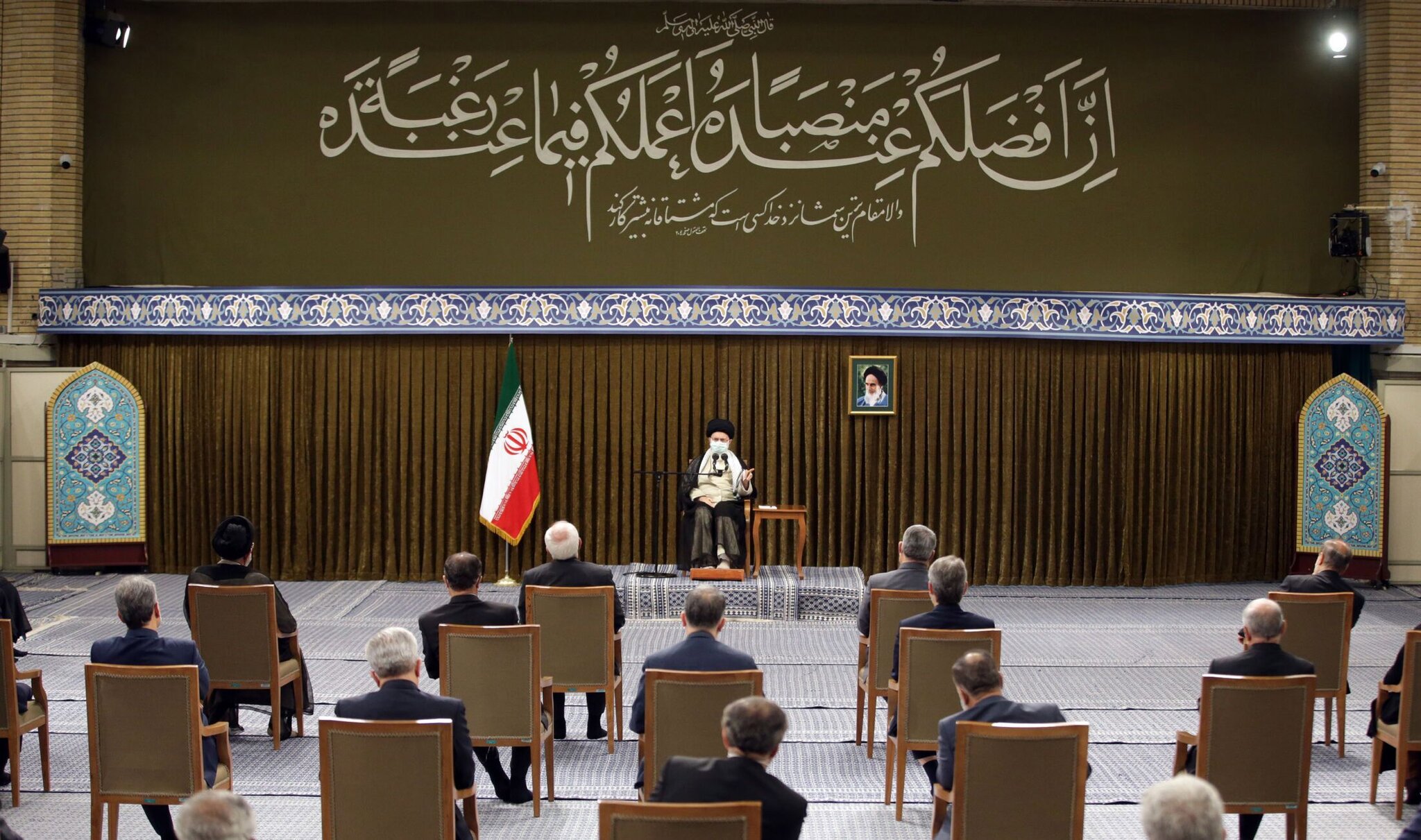 In a photo made available by his office, Ayatollah Ali Khamenei met with the outgoing president, Hassan Rouhani, and the cabinet on Wednesday in Tehran. Iranian Supreme leader office/EPA, via Shutterstock

Iran's top leader injected new doubts Wednesday into the stalled effort to save the country's 2015 nuclear pact with major powers, accusing the United States of duplicity and chastising the outgoing Iranian president as naïve.

The remarks by the leader, Ayatollah Ali Khamenei, come one week before President Hassan Rouhani — an architect of the original nuclear accord — will step down after eight years.

The fate of Iran's negotiations with the United States to revive the accord, which have been suspended for more than a month, now falls to Mr. Rouhani's successor, Ebrahim Raisi, an arch-conservative disciple of Mr. Khamenei who takes office in a week.

The tone and timing of Mr. Khamenei's remarks, which he delivered in person to Mr. Rouhani and his cabinet in a meeting reported on Iranian state media, amounted to a public rebuke of the departing president. The remarks also sent a message that the negotiations are likely to face further challenges under Mr. Raisi.

“A very important experience in this period that the future generations should use is distrust of the West,” Mr. Khamenei said in lecturing the outgoing president and his aides, according to an account reported by Iran's Fars News Agency.

“In this government, it became clear that trust in the West does not work and they do not help, and they strike a blow wherever they can, and if they do not strike somewhere, it is because they cannot,” Mr. Khamenei said.

The 2015 nuclear deal with major powers including the United States granted Iran relief from onerous economic sanctions in exchange for verifiable pledges to severely restrict its nuclear work and vastly reduce its stockpile of uranium, which can be used to make bomb fuel.

President Donald J. Trump repudiated the deal in 2018, calling it insufficiently strict and reimposing American sanctions that have hobbled Iran's economy in what he called a “maximum pressure” campaign. Iran has since suspended compliance with the accord's key provisions.

While Iran has insisted its nuclear ambitions remain purely peaceful, nonproliferation experts say the country is now much closer to bomb-making capability than it was under the agreement.

Talks aimed at saving the agreement from collapse began under the Biden administration. Early hopes for a restoration quickly faded, with Iran demanding the United States first rescind the sanctions and guarantee it would never repudiate the agreement again.

Mr. Biden's negotiators have said Iran must return to full compliance with the agreement and be prepared for further negotiations aimed at limiting Iranian missile development and support for militant groups in the Middle East. American officials have also ruled out the guarantee demanded by Iran.

Both sides said progress was made but they appeared to remain far apart when the talks, held through intermediaries in Vienna, were suspended in June.

Mr. Khamenei, who as Iran's top leader has the final word on national security issues, said the United States was responsible for the impasse in reviving the agreement, which is known as the Joint Comprehensive Plan of Action.

“In these talks, the Americans stood firm on their stubborn position and did not take a single step forward,” he said.

The State Department rejected Mr. Khamenei's assertions, saying the Biden administration has been “sincere and steadfast to achieve a mutual return to compliance.”

“We have made clear that we are prepared to return to Vienna to resume negotiations,” the department said in an emailed statement. “The same could not be said of Iran. No amount of deflection can obscure that.”

Signs of trouble in the talks have started to emerge among the countries that were part of the original agreement — Britain, China, France, Germany and Russia. They have played a prominent role as intermediaries.

“If it continues on this path, not only will it continue to delay when an agreement to lift sanctions can be reached, but it risks jeopardizing the very possibility of concluding the Vienna talks and restoring the J.C.P.O.A.,” she told reporters.

Analysts who have followed the history of the nuclear agreement noted that Mr. Khamenei, in his remarks on Wednesday, did not terminate the talks, which they regarded as a sign he still wanted them to succeed — and that he wanted his protégé, Mr. Raisi, to get any political credit for such an achievement.

“He hasn't hesitated to ban such engagements in the past when he feels that negotiations are pointless or damaging,” said Henry Rome, a Middle East expert at the Eurasia Group, a political risk consultancy.

But the message of Mr. Khamenei's remarks, Mr. Rome said, “really underscores the point that getting back into the deal was never going to be easy or immediate.”