BRICS gear up for dealmaking at annual summit 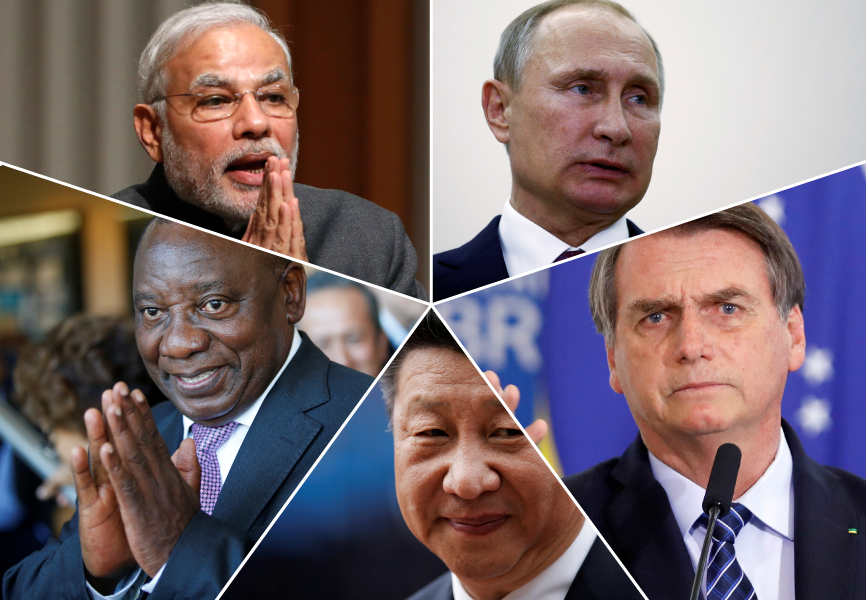 Indian Prime Minister Narendra Modi, Russian President Vladimir Putin, Brazilian President Jair Bolsonaro, Chinese President Xi Jinping, and South African President Cyril Ramaphosa to gather at BRICS meeting in Brasilia. Photos by Reuters.
The grouping of Brazil, Russia, India, China, and South Africa (known as the BRICS) is holding its annual summit on Wednesday and Thursday in Brasilia. As Eurasia Group experts Kelsey Broderick and Filipe Gruppelli Carvalho explain, given the association's increased focus on expanding economic cooperation among its members, trade and investment will be high on the agenda at the gathering in the Brazilian capital.

Amid its extended trade conflict with the US, China is looking to other developed and developing countries to purchase its goods (especially technology products) and to supply it with commodities (such as soybeans and pork). China's BRICS partners are eager to court Chinese trade and investment as they try to find markets for their own exports and jumpstart growth. China will likely use this week's summit to promote the products of telecom giant Huawei, pushing back against a US campaign to exclude them from next-generation telecoms networks out of security concerns stemming from the firm's close ties to the Chinese government. Russia has already embraced the use of equipment from Huawei, ZTE, and other Chinese firms, but Brazil and India have been more hesitant to do so, as they are eager to maintain good relations with the US. Also, as part of ongoing efforts to develop new digital currencies to facilitate trade, the summit is expected to yield a new agreement on BRICS Pay: a digital wallet that allows BRICS citizens to use their own national currencies as a medium of exchange when traveling to other BRICS countries. In addition, it is possible that some of the deals discussed at a recent China-Brazil bilateral meeting will be signed on the sidelines of this week's BRICS summit.

The BRICS will also be positioning themselves to get a larger portion of the financing available from the New Development Bank (NDB), the multilateral lender the BRICS established in 2015. The NDB has a loan portfolio of about $11.6 billion, which it plans to expand to about $16 billion this year. It also has plans to diversify lending away from China and India, the biggest recipients of NDB financing to date. Projects in other BRICS have been plagued by concerns over corruption and other issues, but these countries are pushing hard to obtain much-needed investment. South Africa secured a commitment for $1.5 billion in financing from the NDB at an investment conference in Johannesburg last week. Furthermore, the multilateral lender would like to expand its share capital to include other countries. At this week's forum, members may discuss including developing countries such as Chile and Colombia, as well as strategies for attracting European countries.

Shift from geopolitics to economics

The prominence of economics-focused agenda items at the summit this week represents a big change for an organization that was founded in 2006 to create a “more just” geopolitical order by reforming multilateral institutions and securing a bigger role for developing countries. In 2016, it obtained more voting shares for its members in the IMF and leaders such as former Brazilian presidents Luiz Inacio Lula da Silva and Dilma Rousseff viewed the BRICS grouping as a vehicle for conducting diplomacy with other developing countries. In contrast, current Brazilian President Jair Bolsonaro is all about business, and he sees it as a useful forum for deepening trade ties with China and India. Though the far-right leader had harshly criticized China's growing economic presence in his country during his election campaign in 2018, once in office he abruptly changed tack and began energetically courting Chinese trade and investment. Still, the grouping maintains an important political function, especially for China and Russia, which have long positioned it in opposition to the US-led world order. China uses the BRICS, along with its Belt and Road Initiative, Shanghai Cooperation Organization, and the Asian Infrastructure Investment Bank, to promote itself as a global leader. And Russia, which advocates even more radical change to the international order, takes any opportunity it can to use the grouping as a forum for new, non-Western actions and ideas.

Though the association is having a productive 2019, its ability to expand to continue its economic influence faces several challenges. Chief among these is the outsized heft of China. Not only is the Asian giant's economy by far the largest among the BRICS, but China outpaces all the others in terms of compliance with the development goals set by the grouping.  At a time when the China is making efforts to advance its global aims through a number of fora, the Chinese could lose interest in the BRICS grouping if it feels the other member nations are falling too far behind. Conversely, leadership changes in South Africa, India, and Brazil could yield governments that are more wary of developing too heavy a reliance on Chinese investment or too close an alignment with Chinese standards, particularly in the technology sector.
SUBSCRIBE TO SIGNAL
LOUD WORLD. CLEAR SIGNAL. Signal is a newsletter on international affairs produced by GZERO Media four times a week. No jargon, no nonsense, no noise. Signal is a product of GZERO Media, a Eurasia Group company.