Eurasia Group | Year in Review: US

Year in Review: the US 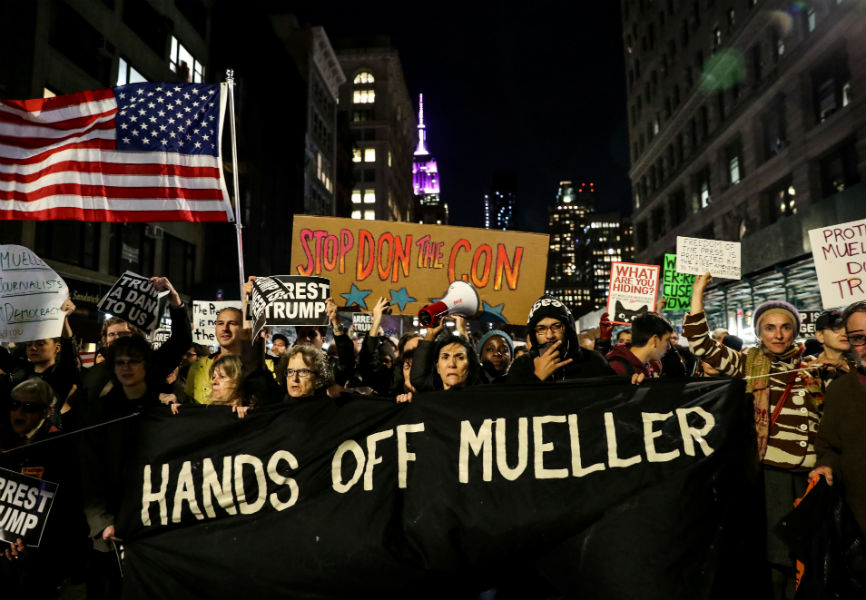 People take part in a protest to protect the investigation led by Special Counsel Robert Mueller, in New York City, U.S., November 8, 2018. REUTERS/Jeenah Moon/
(This is the first in a series of year-end analyses of the main countries and regions covered by Eurasia Group)

In 2018, the disruptive style of President Donald Trump continued to drive US politics, while a long-running economic expansion started to show signs of fatigue. Analysts Todd Mariano and Sandra Yamin Namoos discuss the repercussions for 2019.

1. What was the biggest political story of the past year that will still reverberate in 2019?

Trump's ambitious, aggressive trade agenda shook up world markets in 2018. From North America to Europe and East Asia, the White House determinedly worked to overhaul the US's trading relationships, presenting new uncertainty for businesses. This series of policy objectives is far from complete, and two significant tests loom in early 2019. First, the temporary tariff truce that Trump announced with Chinese President Xi Jinping at the G20 summit will expire at the end of February, and if progress on a trade deal isn't made, the US may move forward with new tariff hikes. Second, the US Congress will probably vote on Trump's NAFTA replacement—the United States-Mexico-Canada Agreement—near the end of March or in early April. With Democrats having retaken the House of Representatives, ratification is less certain than it was under a unified Republican Congress. In addition, the Trump administration will be pressed in 2019 to follow through on trade negotiations with the EU and Japan, both of which got a reprieve from new tariffs ahead of talks.

2. What's one big political development to watch out for in 2019 and why?

The expected conclusion next year of Special Counsel Robert Mueller's investigation into Trump's 2016 campaign will be a major event for Washington. We expect Democrats in the House of Representatives to use their newfound ability to investigate, hold hearings, and compel testimony to confront and obstruct the White House. By law, Mueller's findings aren't public, but the House can subpoena his report. Depending on its conclusions, it could be used as the basis for approving articles of impeachment, or as a starting point for Democrats' own investigative work. The story of Trump's 2016 campaign and possible collusion with Russia has been in the news for many months, and Mueller's work has already led to several court cases and to witnesses turning state's evidence. But the conclusion will be the main event catalyzing what we expect to be a significant reaction in Washington in 2019.

Economic and financial conditions are likely to deteriorate next year. The US economy has started to flash signals of a slowdown, although the risk of recession still appears remote. The Federal Reserve has been raising the fed funds rate since December 2015 and unwinding its balance sheet since 2017, but Chairman Jerome Powell recently allowed that interest rates are now close to their neutral level—neither stimulative nor accommodative. Markets are accordingly lowering their expectations for rate increases in 2019. The post-crisis US recovery combines a historically long expansion with persistent flaws and even conundrums. The economy could certainly avoid a contraction, especially if the Fed eases up on its rate-hiking campaign, but less buoyant economic conditions will make for a more restrictive policymaking environment for the president and the new Congress.