Eurasia Group | What Happens Next in El Salvador—And What It Means for the U.S. Border

What Happens Next in El Salvador—And What It Means for the U.S. Border 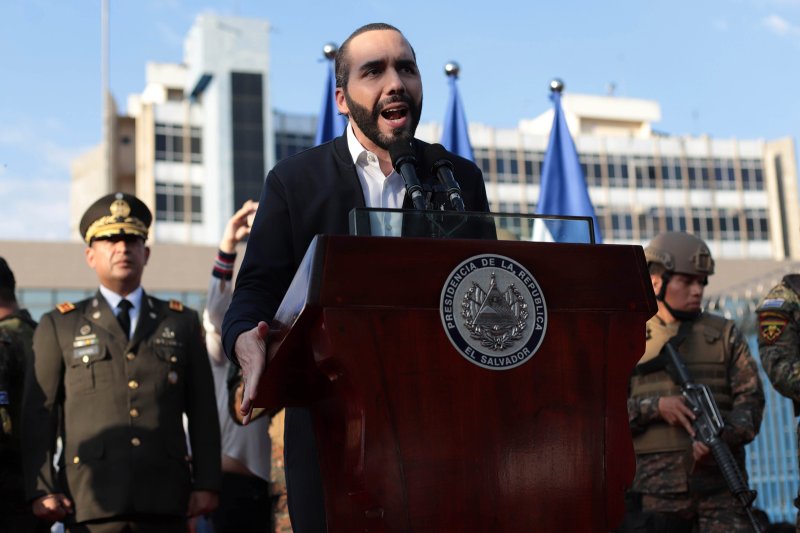 El Salvador's President Nayib Bukele, accompanied by members of the armed forces, speaks to his supporters outside Congress in San Salvador on Feb. 9. Bukele's party has swept all three main opposition parties during 2021's midterm elections, giving him a mandate to change the way politics are run in the central American country. Salvador Melendez—AP
In the last week, Nayib Bukele, El Salvador's charismatic and popular young president, has pushed his country firmly in an authoritarian direction. In the process, he is betting that the Biden administration, fearing the kind of Central American instability that has sent new waves of migrants scrambling to reach the U.S. border, will continue to provide the financing El Salvador needs to avoid unrest and his government needs to keep some expensive campaign promises. It's a dangerous bet.

For decades, El Salvador, a nation plagued by official corruption and deadly violence, had been (mis)governed by the leftist Farabundo Marti National Liberation Front (FMLN) and rightist Nationalist Republican Alliance (ARENA) relics of the country's Cold War-era civil war. Fed-up voters found hope in 2019 in the person of 37-year-old Nayib Bukele, a former advertising exec turned mayor of San Salvador. His baseball caps, leather jackets, and savvy use of social media set him apart from the increasingly hated political establishment.

Once president, Bukele made clear how he intended to put his stamp on government. Unfazed by a hostile legislature, Bukele began “cleaning house” by firing holdovers from previous governments from his administration. He's also worked to break legal restraints on his power. In February 2020, Bukele tried to resolve a dispute with the legislature over an emergency loan by ordering troops into the assembly. In March, when Constitutional Court judges ruled that it was illegal for police to arrest people who defied a pandemic lockdown, Bukele publicly ordered officers to ignore the ruling. The people aren't complaining: after two years in power, his most recent approval numbers hover near 90 percent, and he's received high marks for his handling of the pandemic.

In February 2021, his New Ideas party won 56 of 84 seats in El Salvador's Legislative Assembly, a two-thirds majority that will allow Bukele's allies to pass pretty much whatever they want. The new lawmakers were sworn in on May 1 and moved quickly to clear Bukele's political path forward by firing all five judges on the country's highest court and the independent attorney general, all in violation of Salvadoran law. Bukele marked the occasion by tweeting the word FIRED and punctuating his message with five clapping hands emojis.

All those officials were replaced with Bukele loyalists, who were accompanied to their new offices by armed guards. The army and police are following his orders without respect for the law. The president has also harassed journalists.

For now, there are no remaining checks and balances on Bukele's authority within El Salvador's government, but pressures on him are growing outside, with potentially dire financial consequences. U.S. Secretary of State Antony Blinken phoned Bukele to warn him that much-needed economic aid to El Salvador is inseparable from the “commitment of the United States to improving conditions in El Salvador, including by reinforcing democratic institutions and the separation of powers, defending a free press and vibrant civil society, and supporting the private sector, which relies on the rule of law.” The European Union and Organization of American States have also criticized Bukele's powerplay.

Adding to the economic pressure, investors are demonstrating their own anxieties about the firing of judges and Bukele's future plans by selling heavy volumes of Salvadoran bonds. Unless Bukele can persuade outsiders that he's committed to rule-of-law protections for El Salvador's private sector and foreign investors, it will become far more expensive for his government to borrow money. An IMF package for the country worth $1 billion could be put on hold, and the Biden administration will have plenty of say in that.

So, who has the leverage here?

For now, there's little sign that Bukele will reverse his authoritarian push.

Bukele needs money to see his country through the pandemic and to fund the social and infrastructure spending he's promised. In particular, he needs money from the U.S., and from the International Monetary Fund, an organization in which Washington has the loudest voice. The U.S. is El Salvador's largest trade partner, and money sent home by the more than 2 million Salvadorans living in the U.S. accounts for more than 20 percent of El Salvador's GDP.

But Bukele knows the Biden administration is dealing with a border crisis as surging numbers of migrants from the so-called Central American triangle countries—El Salvador, Honduras, and Guatemala—flee uncertainty and violence in their countries to try to apply for asylum in the U.S. According to recent reporting from Nick Miroff of the Washington Post, most of the families reaching the border are from Honduras, and most unaccompanied children are from Guatemala, where unemployment is high and smuggling networks are the most active. For now, the number of desperate people from El Salvador has slowed, but that's in part a result of ceasefires among criminal gangs, truces that may not last.

Bukele is betting that the U.S. will limit its actions to public expressions of concern while continuing to send cash to keep El Salvador afloat to avoid a larger border crisis. But the U.S. knows Bukele has few alternative options. He can pressure local banks for funds and raid the country's pension plans by nationalizing them. He can ask China, which has not criticized his actions, to help El Salvador patch holes in its budget. But his government will face serious financial stress and risk default on its debt (nearly 90% of GDP) over the next couple of years. The Biden administration could also send most of the promised funds directly to civil society groups inside El Salvador, rather than to its government.

For now, Bukele is sticking to his guns. At a meeting with European and Canadian diplomats on May 4, he insisted that “elections have consequences” and that his actions are entirely justified.

The One Major Misconception About It

Some describe Bukele as a hipster version of Donald Trump. Yes, he got along well with Trump. Much of his popularity rests on the visible break with the existing political establishment that he represents. He rose to power on promises to “drain the swamp” of his country's political culture, and he's uses social media to great effect. (OK, I guess he is a little like Trump.)

But the comparison ignores critical differences. As President of the United States, world leaders were forced to accommodate Trump. Not so the president of a small country that depends on outsiders for the financing it needs to survive. On the other hand, Bukele has amassed a degree of power within his borders that Trump could only dream of. U.S. courts did not buckle under pressure from Trump. The Pentagon regularly resisted his pronouncements, and even Republicans in Congress sometimes quietly overrode his plans, particularly on foreign policy questions like sanctions on Russia.

The One Thing to See

To appreciate Bukele's iconoclastic political instincts, here's a clip of his speech to the UN General Assembly in 2019 not long after he took office. It opens with a selfie from the world's most famous podium and a friendly suggestion that governments could save lots of money by limiting future sessions of the UN General Assembly to a Zoom call.
TIME
TIME