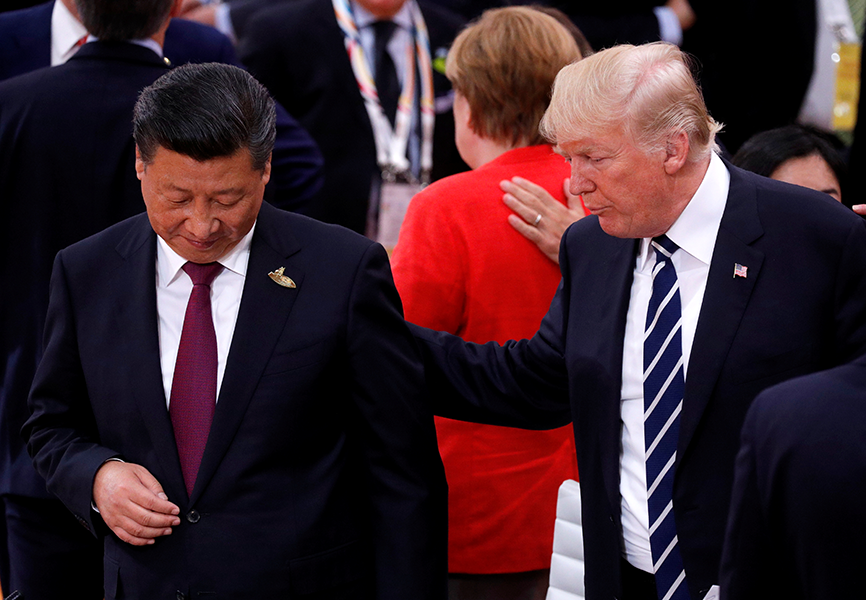 U.S. President Donald Trump talks to China's President Xi Jinping during the G20 leaders summit in Hamburg, Germany July 7, 2017. REUTERS/Philippe Wojazer
the real meeting to watch at the g20 summit
Global hype reached a fever pitch around President Trump's meeting with Russian President Vladimir Putin at the G20 Summit in Hamburg, Germany on Friday. But arguably more consequential will be the US president's sitdown with Chinese President Xi Jinping this weekend. The possibility of a trade war with China has never been more real. And speaking of wars, both leaders will be anxious to find a way to pacify North Korea's growing nuclear threat.

Evan Medeiros, managing director of Eurasia Group's Asia practice, previews this weekend's meeting between  the two leaders and the very real pitfalls they both face.

Xi's fundamental game plan going into the meeting is to stabilize the relationship and to elicit a commitment from Trump not to take further provocative actions. So no more armed sails, no more major military operations in the South China Sea.

The challenge is what the US really wants -  is more and better cooperation from China on North Korea – to really squeeze North Korea to the point at which they're willing to make a strategic decision to give up their nuclear and missile programs. And while Xi Jinping is unhappy with North Korea, North Korea-China relations are at an all-time low. And China certainly didn't approve of North Korea's ICBM test.
Xi is going to be reluctant to agree to a major increase in sanctions on North Korea, fearing that would destabilize North East Asia. So Xi might be willing to give Trump a little bit more – but I'll depend in part on their effort to negotiate a soft landing in the US-China relationship after the major actions the US took last week.

An additional complication of this meeting is the fact that it comes several months before China's leadership transition this fall. So in that political context Xi Jinping can't do anything, commit to anything, that could create a political vulnerability for him. So that will constrain his space to give the US more.

Regardless of the outcome of the meeting, this meeting will be critical to determining the shape and the trajectory of the US-China relationship for the remainder of the year. This is the second time both leaders have met. It comes after a period of US actions that increase tensions are growing on the Korean peninsula. So this meeting will be absolutely critical to determining the future of the US-China relationship.

For more analysis of the G20 Summit, head back to Eurasia Live.