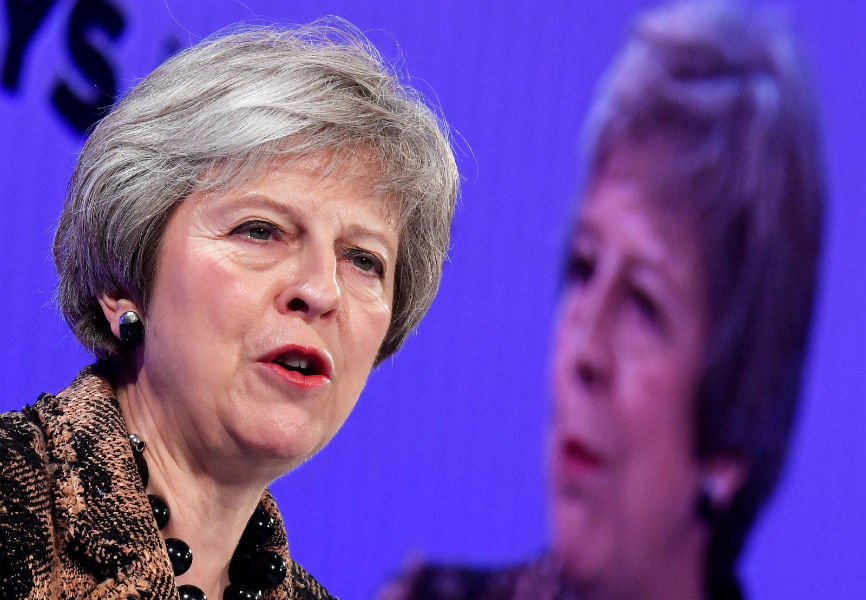 Britain's Prime Minister Theresa May replies to questions after speaking at the Confederation of British Industry's (CBI) annual conference in London, Britain, November 19, 2018. REUTERS/Toby Melville
What Happened This Week:
In finally unveiling her Brexit deal compromise to the public last week, British Prime Minister Theresa May set off a political firestorm, complete with cabinet resignations and calls for her ouster from members of her own party. This week has been quieter by comparison, but May is now preparing to travel to Brussels at the weekend to see if there is any room left for negotiation with the European leadership about the terms of the UK's exit from the European Union, due on March 29 next year.

Why It Matters:
Because it's nearing crunch time for Brexit. The next few weeks will likely determine whether Britain leaves the E.U. in an orderly, amicable way, or if it crashes out and burns itself—and Europe—in the process. Absent a fundamental change to the proceedings, the U.K. is heading towards the binary choice of either opting for May's Brexit deal or no deal at all.

Are there still ways for fundamental change to happen at this point? Absolutely. The first would be if May is ousted as leader of her Conservative Party (and by extension, as U.K. prime minister) by a vote of no confidence by the members of her party currently sitting in parliament. The second would be if new general elections are triggered, as the opposition Labour party has called for should May's deal fail to pass Parliament. The third would be the announcement of a new Brexit referendum.

Any of the three would complicate the already shambolic Brexit process in still-unforeseen ways. It's almost two and a half years since the Brits voted for Brexit, and the drama may only just be getting started.

What Happens Next:
Domestically, May could yet face a vote of no confidence in her leadership, if the magic number of 48 Conservative lawmakers call for it. But there doesn't appear to be appetite to actually oust her as leader of the Tory party, perhaps due to the fact that there is no consensus candidate to replace her. That gives May some space to operate, as her party members would be prohibited from calling another no confidence vote against her for at least 12 months. Unfortunately, it doesn't look at all likely that May has the votes to get her Brexit deal to be approved by Parliament overall. But one political crisis at a time.

On the European side, a summit of E.U. leaders is being convened on Saturday to officially bless a Brexit withdrawal deal that seems doomed to fail in the U.K. parliament. There actually is flexibility from the Europeans on the specific terms of the Brexit deal — and there is time left to renegotiate, despite all the talk of cliff-edge deliberations. But the EU leaders are unwilling to talk about it until the existing deal May has struck fails.

Let's not forget Brexit is a much lower priority for Europe than it is for the U.K. British politicians are completely consumed by it, as it will likely determine most of their political futures. Not so much for their European counterparts. All of which means that it's going to be a tall task for May to make any breakthroughs in Brussels.

The Key Number That Explains It:
Eight: the number of resignations from Theresa May's cabinet over the last year. And more are expected as early as this week.

The Key Quote That Sums It All Up:
“A change of leadership at this point isn't going to make the negotiations any easier, and it's not going to change the parliamentary arithmetic. What it will do is mean there is a delay to those negotiations and that's a risk that Brexit gets delayed or frustrated.” – U.K. Prime Minister Theresa May.

The One Major Misconception About It:
That the people voting/supporting Brexit are all simpletons who don't understand what's happening. There's good reason why many Brits made considered choices to vote leave. It's not hard to believe that the E.U. is on an unsustainable long-term path, and there are plenty of historical reasons why the U.K. has always felt unenthusiastic about the further integration which would be needed to make it work. So there's a case to be made for Brexit—but not by the political leaders that are currently driving this chaotic process, obviously…

The One Thing You Should Read About It:
Theresa May is shaping up to be the most decisive single figure of the Brexit ordeal—no matter how negotiations shake out, it's worth reading her story.

The One Thing to Say About It:
If the E.U. is going to break up anyway given the growing divide between east vs. west, north vs. south and core vs. periphery, getting out early might actually be preferable for the U.K.

The One Thing to Avoid Saying About It:
You know what the Brexit process needs? More Boris Johnson.

This article was originally published on TIME.com
TIME
TIME