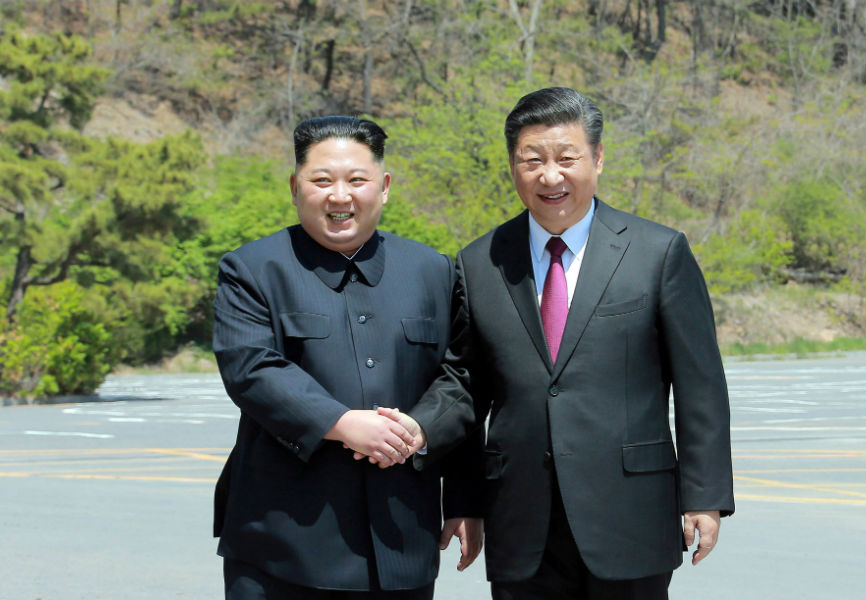 As anticipation builds for the G-20 meeting between Chinese President Xi Jinping and US President Donald Trump next week in Japan, China's state broadcaster announced on Monday a surprise state visit by Xi to North Korea for later this week.

While this state visit is intended for an audience of one that's currently sitting in Washington, it also serves as a reminder to the rest of the world that any lasting resolution on the Korean peninsula still runs through Beijing. China remains North Korea's main link to the outside world—Beijing is Pyongyang's largest trade partner, and has been responsible for 90% of North Korea's trade since 2000. China's decision to join (and actually enforce) UN sanctions against North Korea helped push Kim Jong-un to the negotiating table with the US in the first place.

This will be Xi's first trip to North Korea as president (he previously traveled there in 2008 as China's vice president), and it will be the first trip to the Hermit Kingdom by a sitting Chinese president since Hu Jintao visited Kim Jong-il back in 2005. Crucially, this trip is being billed as an actual “state visit," a departure from the usual designation Beijing uses to describe trips to North Korea (usually referred to as “official friendly visits”). South Korea has also endorsed the trip, hoping that Xi's trip will kickstart the stalled denuclearization talks.

There's also an element of PR damage control here for Xi. Criticism over his dealings with the US on trade, and more recently the mass protests in Hong Kong over the controversial extradition bill, have put Xi on the back foot. Taking this trip to North Korea puts him back in the driver seat of a critical global issue ahead of next week's showdown with Trump.

The visit will be cordial and filled with pomp, but don't expect substantial headlines to emerge from the meeting between Xi and Kim. The real measure of Xi's Pyongyang trip will come one week later when Xi meets with Trump at the G20 in Japan. In the past, Trump has tied China trade talks to Beijing's support in dealing with the North Korea threat. While that has been lost in recent months as the trade war between the US and China has heated up, Xi may be banking on a last-minute trip to Pyongyang to remind Trump that his most promising foreign policy success to date—engagement with North Korea—requires Xi's blessing to move forward. While the US currently has the upper hand in trade negotiations with China (evinced by the US decision to include Chinese state-champion Huawei on the Commerce Department's Entity List, which has brought the company to its knees), China has something that Trump wants, too—a legitimate foreign policy victory that eluded Barack Obama. It's doubtful that moves the needle much with Trump given how much political capital he has invested in taking a hardline against China, but Xi may be hoping to play to Trump's ego. That isn't the worst strategy in the world.

“China was relieved when the talks fell apart in Hanoi, because it was an opportunity for China to play a role in denuclearization talks again … Trump was the first president to say he would deal with the North Korean leader without including China.” –Lee Seong-hyon, director at the Center for Chinese Studies at the Sejong Institute in Seoul.

The one thing to watch about it:

For all the talk of trade wars and nuclear deals, it's far too easy to overlook the actual human lives that hang in the balance. You need to watch this first-person account of a woman who defected from North Korea at age 13:

That this North Korea trip for Xi is risk-free. Kim Jong-un has a history of using big international gatherings to take provocative actions. Xi will want Kim to keep quiet while the G20—and more importantly, bilateral talks with Trump—are ongoing next week. Should Kim not fall in line, it will raise questions over how much control over the North Korea situation Xi really has. Even worse, if Kim doesn't keep quiet while the G20 is underway and decides to test a missile (or nuclear device), it may even lead to speculation that Xi prodded Kim to take aggressive steps, straining US-China relations even further.

While plenty try to draw comparisons, the US approach to North Korea is in no way similar to its approach to Iran, the other big nuclear threat Washington sees out there. While Trump likes to use brash and aggressive rhetoric with both, the reality is that the US has remarkably little leverage over North Korea (especially compared to China), whereas the US has plenty of leverage over Iran via oil and financial sanctions (not to mention the European countries that want to see the Iran nuclear deal remain in place). And that's exactly the way both situations are currently playing out.