Nigeria braces for a close election 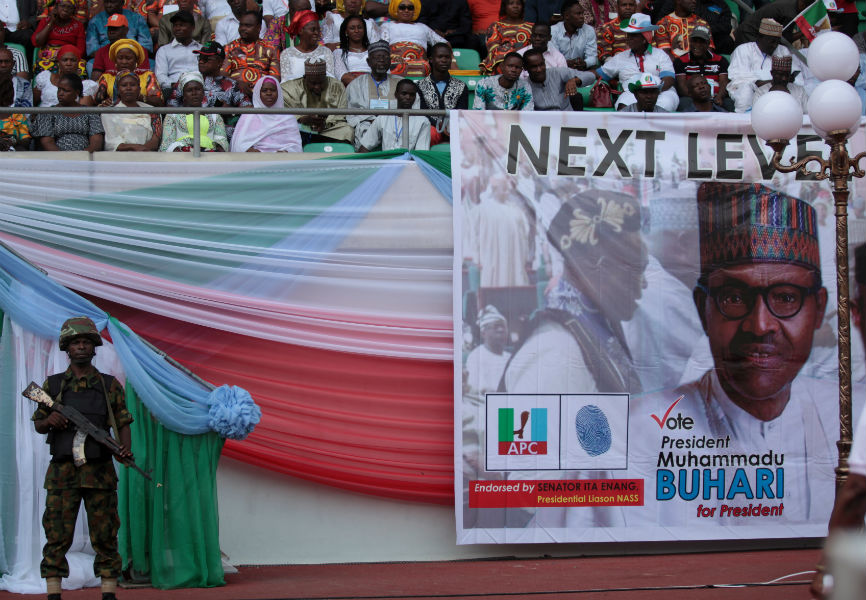 Buhari campaign event in Uyo, Nigeria. REUTERS.
Editor's note, 21 February 2019: Hours before the polls were scheduled to open on 16 February, Nigeria's Independent National Electoral Commission announced that it would be postponing national and state elections due to logistical issues. The presidential election is now set to take place on 23 February and state elections will be held on 8 March.

Nigerians will go to the polls on Saturday to choose between incumbent President Muhammadu Buhari and former vice-president Atiku Abubakar to be the next leader of Africa's most populous country. Eurasia Group experts Amaka Anku and Tochi Eni-Kalu explain what to watch for in the upcoming vote.

Who is the frontrunner and why?

Despite concerns about his health, sluggish economic growth, and insecurity in the northeast and north-central regions, Buhari is likely to win reelection. Atiku has been unable to capitalize on his early momentum due to competing priorities within his campaign organization and his inability to craft a compelling message, allowing the president to retain the advantage. No politician matches Buhari's popular appeal in the northwest and northeast regions, which account for about 40% of the electorate, and his sway over state patronage and the security services will likely benefit him on election day. Moreover, Buhari's strong record on completing infrastructure projects is likely to win over voters. Positive news coverage, along with missteps within the president's camp such as the suspension of the chief justice over allegations of corruption, have boosted Atiku's campaign lately. But with little time left before the polls, this is unlikely to have a significant electoral impact.

It is shaping up to be a historically close election—what are the risks this entails?

The race is expected to be close, raising the possibility of a result in which the number of rejected or canceled votes is greater than the victory margin. That would give the opposition People's Democratic Party strong grounds to call for a rerun. Similar scenarios have played out at the gubernatorial level, though never in a presidential election. The opposition People's Democratic Party has already begun to discredit the electoral process, using Buhari's refusal to sign an electoral bill mandating the use of electronic voter cards and the suspension of the chief justice to support their argument that the ruling All Progressives Congress intends to manipulate election results in Buhari's favor.

This rhetoric will heighten tensions and increase scrutiny of the number of canceled and voided votes in the election. A rerun would create a brief, intense period of uncertainty but would likely be resolved in favor of the incumbent.

What challenges will the next president face?

Reviving the economy is likely to be the single biggest one. Since exiting recession in the second quarter of 2017, the country has endured a sluggish recovery and continued high unemployment. The jobless rate increased from 7.5% in the first quarter of 2015 to 23.1% in the third quarter of 2018. Young Nigerians are bearing the brunt of the pain—the National Bureau of Statistics says that about 55.4% percent of the working age youth population is either unemployed or underemployed. Given the country's rapid population growth (it is projected to be the third most populous country in the world by 2050), the onus will be on the government to accelerate economic growth and job creation to avert a socio-demographic crisis.

The next president will also face growing calls to devolve some powers from the federal government to states. Resolving persistent security issues in the Niger Delta, and the northeast and northcentral regions, will be another priority.

How would the two candidates deal with these challenges (or not)?

Neither candidate is likely to undertake the difficult reforms needed to significantly improve the country's political and economic outlook. Concerns about Buhari's ill-health would linger in a second term, and another protracted absence is a possibility. Ironically, his absence could prove positive, as it would hand power over to Vice President Yemi Osinbajo, who would potentially make more rapid progress on needed reforms. But it would likely also be too short a period to make significant progress.

Atiku, on the other hand, has unclear and untested policy priorities; he has voiced contradicting opinions on a variety of issues. Moreover, as a beneficiary of Nigeria's institutional weaknesses—he is believed to have accumulated significant wealth during his tenure as vice president—he is unlikely to implement reforms that will directly affect his interests or those of his allies, such as an overhaul of the tax system or the energy sector. On a positive note, he is more likely to proactively manage the Niger Delta situation to avoid oil disruptions.