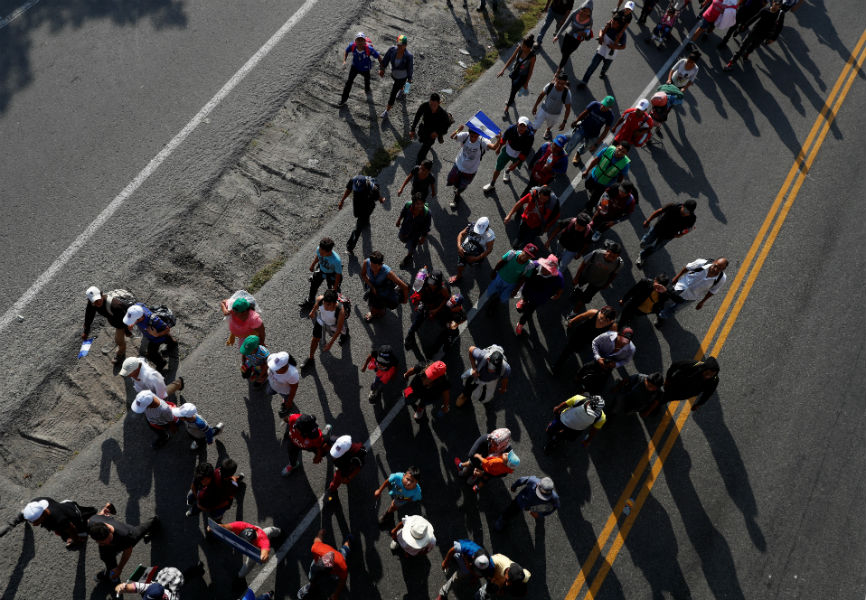 Central American migrants, part of a caravan trying to reach the U.S., walk along the road as they continue their journey, in Ciudad Hidalgo, Mexico October 26, 2018. REUTERS/Carlos Garcia Rawlins
A group of over 7,000 migrants originating in Honduras is traveling north toward the US, calling attention to the desperate living conditions in their home country and putting pressure on the governments of the Northern Triangle, Mexico, and the US. Eurasia Group analysts Risa Grais-Targow and Sandra Yamin Namoos examine the implications.

Why is this happening now?

The caravan of migrants, currently in southern Mexico, started coming together a couple of weeks ago in San Pedro Sula, a city in northern Honduras known for its violence. Leftist activists organized the group with fliers on social media, partly to protest the government of President Juan Orlando Hernandez, who was elected in a divisive election last November whose results were called into question by the Organization of American States.

Increasingly, the hundreds of Hondurans who leave their country and head north toward the US every day are banding together into large groups, though the latest exodus is the largest ever. They are fleeing extreme poverty and violence that force children into criminal gangs. The caravans allow migrants to dispense with the services of expensive human traffickers and offer a measure of safety during their long, hazardous journeys.

Illegal border crossings to the US declined in 2017 to a more than 40-year low but have been climbing again this year, including record-setting numbers of people traveling in families in September. Border Patrol agents arrested 16,658 family members in September, the highest one-month total on record and an 80% increase from July, according to Department of Homeland Security statistics obtained by The Washington Post.

What is the impact on US politics?

For US President Donald Trump, the caravan has given him a new, politically advantageous story to tell. Stoking American anxieties about immigration worked well as a cornerstone of his 2016 campaign.

Trump immediately seized on the caravan as the visual to fire up his base ahead of the 6 November midterms. His threats to deploy the US military and to shut down the US southern border are midterm calculations to increase GOP voter turnout. The caravan allowed the president to shift the conversation from healthcare—where Republicans are on the defense—to the image of an “onslaught of illegal aliens.”

Trump is tapping into the same strategy—blaming Democrats for weak US immigration laws—that energized his base in the 2016 presidential campaign. The president has been frustrated that Congress has not funded the $25 billion border security wall he promised in 2016. Lawmakers punted until after the midterms a contentious fight over its funding, which will be further complicated should Democrats prevail in the House (as expected) or the Senate. But Trump risks overplaying his hand as he ratchets up the rhetoric with unsubstantiated claims that “criminals and unknown Middle Easterners are mixed in” the caravan. Recent polls show that Americans trust Democrats slightly more on immigration policy.

What is the impact on US relations with Central American countries and with Mexico?

In addition to talk of deploying troops and shutting down the US's southern border, Trump has threatened to cut off aid to the governments of Guatemala and Honduras if they don't stop the flow of migrants, even though both have been steadfast allies on this and other issues. US aid for these countries has already been on a downward trajectory and is set to decline further in 2019, to around 0.3% of GDP for Honduras and less than 0.1% for Guatemala. Though not a transit point for the caravan, Trump is also threatening to cut off aid to El Salvador, likely due to other sources of bilateral tensions.

Further cuts would represent another headwind for these already ailing economies, possibly encouraging more migration and making it more difficult for the countries to beef up their own border controls. Even more damaging are other immigration policies pursued by the Trump administration such as ending Temporary Protective Status for Salvadoran and Honduran migrants. Depending on how the legal challenges play out, that could result in deportations, which would cut into vital remittance flows, which represent close to 20% of GDP in both countries.

In Mexico, President-elect Andres Manuel Lopez Obrador had campaigned on promises to treat migrants with dignity and pledged to offer more work visas for Central American migrants. But he has also acknowledged that Mexico can't simply welcome everyone that walks across its border illegally, and he knows he can't ignore Trump's tough talk. Lopez Obrador recently sent Trump a letter suggesting the implementation of a development plan for the region.