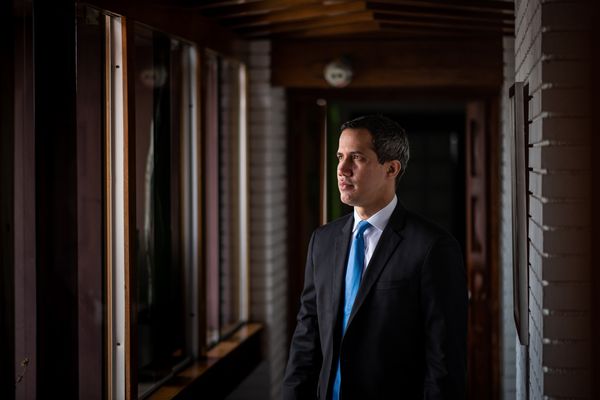 Juan Guaido following an interview in Caracas on June 8.Photographer: Gaby Oraa/Bloomberg
Not that long ago, Juan Guaido was hailed as the future of Venezuelan democracy, embraced by dozens of nations as the legitimate president over Nicolas Maduro. He had downtown offices and held weekly rallies with tens of thousands of supporters.

Those days are gone. Maduro has survived beyond expectations, placing Guaido so on the defensive that he's now fighting for leadership of the opposition against a veteran colleague, Henrique Capriles. In separate interviews, the two men discussed the acute dilemma now dividing their movement: whether and how to take part in upcoming local elections and negotiations with the government.

To do either is to acknowledge that Maduro remains firmly in charge. To stay away is to leave him unchallenged, free to do as he pleases. If they do take part, elections may be rigged anyway and the government can use the negotiations to buy time and stay in power. The upside is the opposition wins a few top spots in cities and states and uses them to expand its base.

“The dictatorship will never willingly agree to a political accord that leads to its exit because its objective is to stay in power at all costs,” Guaido, 37, said from a makeshift office in Eastern Caracas after having been driven out of other spaces by police raids. “We need to force a negotiation that generates real competitive conditions for an election and turn that into a window to solve this terrible conflict.”

His competitor, Capriles, 48, has been speaking with the government and takes a more conciliatory position. Donald Trump pursued a policy of regime change. Now that Joe Biden is in the White House, Capriles argues that a compromise is needed to rescue Venezuela from its desperate situation.

“Talking about a negotiation was impossible with the Trump administration,” he said. “I agree with a comprehensive process that allows for incremental results, small victories that add up. We have to dismantle the existential conflict in which the one who wins takes all and the one who loses is left nowhere. We need to find views we agree on because the country's situation speaks for itself.”

Capriles was speaking in Las Brisas, a small area south of Caracas, in the poorest district of Miranda State, where he was twice governor. He pointed around him: “There have never been so many poor people in Venezuela, public services were never this bad. None of the people you see here have been vaccinated.”

More than 300 spots in state and local office are up for grabs on Nov. 21, the first election to take place under new electoral oversight.

The commission that oversees Venezuelan voting now includes two opposition members out of five. It's seen as a concession Maduro had to make in hopes of attaining relief from punishing U.S. sanctions, regaining global recognition and returning to international financial markets. Once a rich country, Venezuela is a humanitarian disaster.


For years, the nation's fractured opposition has been battling itself, not just authoritarian rule. Imprisoned by the dozens, disenfranchised by rigged elections and pushed into exile by Maduro, leaders also split on strategy and wrestled for prominence.

Risa Grais-Targow of Eurasia Group believes that Maduro will give a little for this election, but not much.

“In the near-term Maduro has incentives to give just enough so that part of the opposition participates, especially if he thinks it could bring about U.S. sanctions relief,” she said. “I highly doubt that includes presidential election and full transparency for international observers, but he could, for example, return party banners and leadership to the opposition or rehabilitate opposition figures currently barred from participating.”

While Guaido once galvanized the opposition and rallied Venezuelans together with most of the Western world, cracks began to show following his botched attempt in April 2019 to spark an uprising and to win defectors from the military. Now he announces events a day or only hours in advance to avoid retaliation. His uncle remains under house arrest on bogus charges.

Maduro's government already walked away once from Norway-sponsored talks, in 2019, as the U.S. intensified oil sanctions. Now the opposition faces the prospect that he sits down to negotiate, only to refuse compromises such as bringing presidential elections forward from 2024.

“What are the guarantees they require to be ready to dispute power in order to generate trust in the country, attract foreign investment, improve the country's production capacity so that we become a country again?” Guaido asked, in what's a key difference with Capriles's approach.

“Sanctions cannot be lifted until we can verify the possibility of a solution, because otherwise we fall into Maduro's trap: to ease pressure, relax international pressure, and even worse, that the world gets used to a dictatorship,” Guaido said.


To tighten his grip on power, Maduro banned both Guaido and Capriles -- and a dozen others -- from participating in any election for more than a decade. The government also used the supreme court to take over major political opposition parties last year.

The new electoral board is working on restoring the opposition candidates' right to participate and is planning to create a new umbrella party for them to register ahead of an Aug. 29 deadline, according to a person with knowledge of the matter. A team from the European Union is also planning to visit this month to evaluate overseeing the vote.

An electoral commission spokesperson didn't respond to a request for comment.

Capriles is challenging Guaido not only in his approach to the government but in his freedom to go directly to the people -- a result of his engagement with Maduro and his aides. His style was on display as he made his way down La Reinita slum near Las Brisas, stopping by hillside shacks made of plywood and metal, many without electricity and water. His aides handed out soup and painkillers.

Later, Capriles spoke of the men asked to defend the regime.

Then he added that the desperation was forcing a kind of unity: “The socio-economic situation of Venezuela is like a very thin thread that could break. On the other side they're also taking stock. Things are different now because I believe that we can all be aligned in the same position.”
Bloomberg
Bloomberg