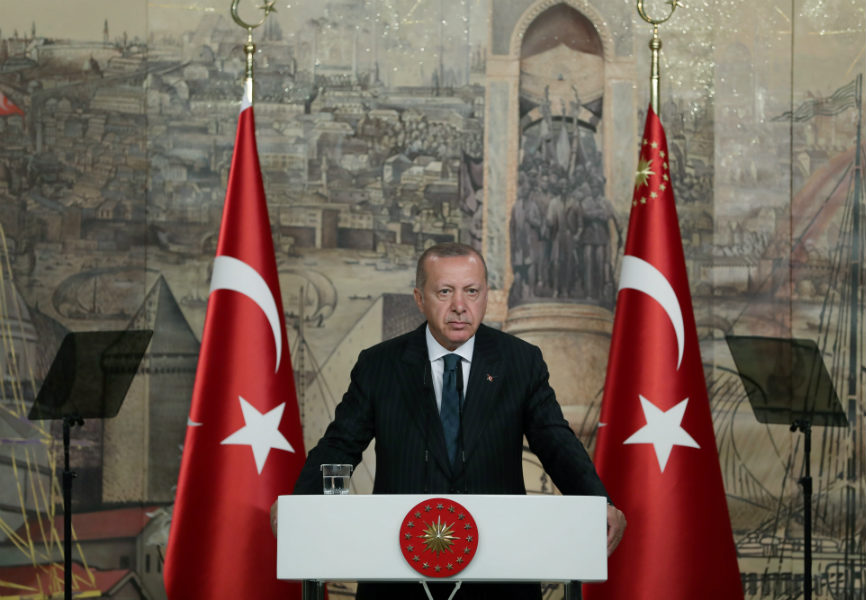 Turkish President Recep Tayyip Erdogan. REUTERS.
Turkey has held a new mayoral election in its largest city after President Recep Tayyip Erdogan and his Justice and Development Party (AKP) protested that irregularities had marred the previous vote, which resulted in defeat of their candidate. A series of local elections held on 31 March had resulted in surprise AKP losses in both Istanbul and Ankara. But the move to hold the new vote in Erdogan's hometown of Istanbul seems to have backfired, with his party losing by an even wider margin the second time around. Here are some key takeaways from the repeat election.

According to preliminary results, Ekrem Imamoglu of the main opposition Republican People's Party (CHP) won 54% of the vote, compared to 45% for the AKP candidate, Binali Yildirim. That translates into a difference of about 800,000 votes, up from 13,000 on 31 March. Erdogan had weighed in forcefully during the campaign with strong criticism of Imamoglu and his party. The divisive rhetoric seems to have encouraged some AKP voters to either defect to the CHP or stay home on election day.

For Erdogan, the loss of control of both Istanbul and Ankara is his biggest setback in his nearly two decades at the helm of the country and comes just a year after winning reelection and two years after voters approved the expansion of his office's powers in a referendum. Apart from the symbolism, losing control of Istanbul will mean the loss of a significant revenue source for the ruling party's machinery. It will be difficult for Erdogan to recover from this blow.

Erdogan will be forced to accept the result

The magnitude of the loss gives the Turkish president little room to maneuver. Whereas the ruling party might have been tempted to manipulate the results or again accuse the opposition of wrongdoing in a closer contest, that will probably not be possible in the present scenario. Similarly, the ruling party will probably not feel it can follow through with threatened legal action against Imamoglu personally. Erdogan had warned that even if the opposition candidate won the mayorship, he could be removed from office over an insult that he allegedly made to a regional governor during a recent argument. Imamoglu has denied the allegation.

Seeming to bow to the inevitable, Erdogan tweeted his congratulations to the winner soon after preliminary results were available.

Erdogan's decline will play out over time

Though his grip on power seems to be slipping, Erdogan can't be dislodged anytime soon. The next parliamentary and presidential elections are not scheduled until 2023, and both the AKP and the Nationalist Movement Party (MHP) have incentives to maintain their alliance in parliament, at least for the time being. Some factions within the AKP will blame the party's Istanbul defeat on cooperation with the MHP and the related drift toward the right, creating pressure to take on an alternative coalition partner. But making a switch would introduce the possibility of an early election, something Erdogan cannot afford now. The MHP, for its part, has much to gain in keeping the alliance going (money, civil service appointments, policy impact, etcetera).

The risk of a rupture in the AKP-MHP alliance, however, will increase over time. Erdogan has lost his aura of invincibility, the country's economic situation continues to deteriorate, and both former Deputy Prime Minister Ali Babacan and former Prime Minister Ahmet Davutoglu are planning to start their own center-right movements that would challenge the president. Erdogan's diminishing political capital will lead to a tenser relationship with the MHP. It seems unlikely the country will make it to 2023 without new elections.

Erdogan will lash out at home and abroad

The Turkish president has grown increasingly authoritarian in recent years, employing divisive rhetoric to shore up his base and using the tools of the state to repress his political opponents. He has championed populist economic policies that have brought short term gains at the cost of mounting financial liabilities. In the face of adversity, he is likely to double down on this approach. Likewise, he will reason that he cannot afford to show weakness in the international arena. That means, for example, the odds of him backing down in the dispute with the US over the planned purchase of Russian S-400 missiles are even lower now. As a result, the US will likely slap sanctions on Turkey and investors will punish it over the country's perceived shift away from the US.