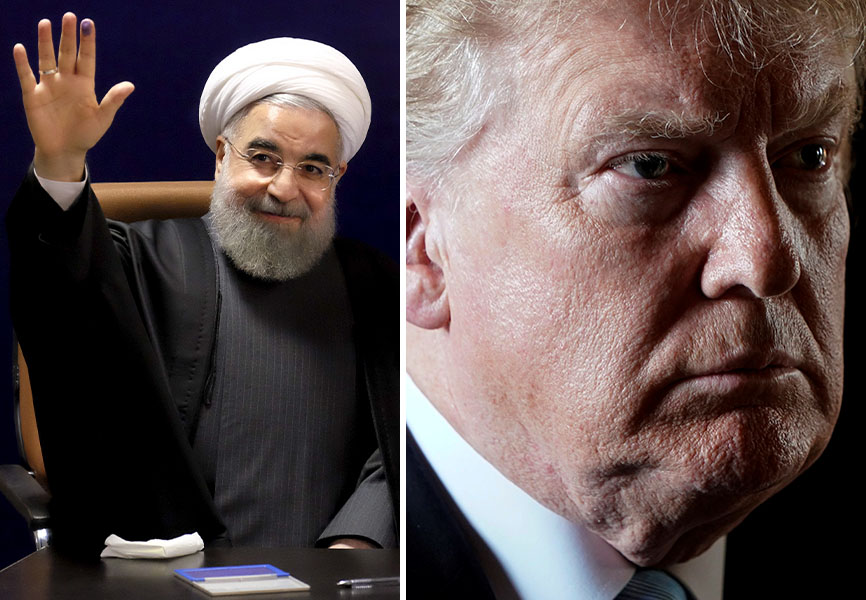 Iranian President Hassan Rouhani and US President Donald Trump. REUTERS.
Prime Minister Shinzo Abe travels to Tehran on Wednesday on an unusual mission for a Japanese leader: to reduce tensions between the US and Iran.

Abe will likely be more messenger than mediator between the two adversaries. But he may also encourage Iranian leaders to negotiate directly with the Trump administration.

The unlikely prospect of a meeting between Presidents Donald Trump and Hassan Rouhani has captivated media attention. But the focus on direct talks obscures an important shift in the relationship between the US and Iran.

For the first time since the US withdrew from the nuclear deal in May 2018, Iran has started negotiating with the US.

The negotiations are not face-to-face, of course. They are geopolitical. Iran is steadily raising pressure in the nuclear and regional realms, while dangling the possibility of face-to-face talks. This new strategy aims to avoid both economic collapse and war with the US.

While its goals are not new, Iran's strategy is. Iran's approach from May 2018 through April 2019 was essentially passive. It took a “wait-and-see” approach to see how tough US sanctions would be—and how willing European and Asian governments would be to challenge them.

When it came to the US, Tehran's strategy comprised three tenets: no talks, no nuclear deal violations, and no major regional provocations.

The U.S. decision on oil sanctions changed Tehran's calculus. Washington announced on April 22 that it would seek to block all oil exports, the Islamic Republic's most important export and source for hard currency. The “wait-and-see” approach could not endure.

Supreme Leader Ali Khamenei directly addressed this new policy in little-noticed comments on May 29: “When you do not use your pressure tools and your pressure leverage, [the enemy's] mind is at ease.” Tehran's only option, he concluded, was using its own “pressure tools” in response.

Tehran's posture on direct talks, the nuclear deal and regional policy are now negotiable. Iran's actions are not exclusively aimed at Washington—they have a variety of audiences in Europe and Asia. But the US-Iran dynamic is the most important and potentially the most explosive.

Iran is starting to show some flexibility on its prohibition on talks with Washington. Many analysts have emphasized that Iran is unlikely to capitulate fully to US demands and wave the white flag of surrender. This is probably right but misses the point.

While Iran will not concede to all US demands, it may well eventually talk with Washington about several of them. It would not be surprising if Tehran continues to dangle the possibility of talks to distract from or deflate Washington's “maximum pressure” campaign.

Indeed, Abe is joining diplomats from Oman, Iraq, Switzerland, and Germany who are trying to establish channels between the US and Iran—ensuring Iran's situation remains on the front pages.

The prospect of US-Iran talks likely contributed to the deterioration of Trump's ties with National Security Adviser John Bolton, a divergence Tehran is eager to exploit.

Iran has also decided to end its full compliance with the nuclear deal. It is instead adopting an a la carte approach to the accord. The government said on May 8 that it would no longer observe the nuclear deal's caps on the stockpile of low-enriched uranium and heavy water. It also threatened to take further steps in 60 days if more economic relief is not delivered.

Some view Iran's statement as a precise ultimatum and a roadmap for next steps. Tehran's threat is precisely the opposite. The beauty of the statement, at least from a negotiating perspective, is how vague it was.

Finally, Iran is slowly taking its gloves off in the region. The Trump administration has accused Iran of sabotaging four tankers near the United Arab Emirates port of Fujairah and for ordering drone strikes on Saudi pumping stations.

Both attacks appeared to be finely calibrated to send a political message—Gulf oil exports are vulnerable—while not incurring much damage or triggering war with the US. Similar low-level attacks will likely continue.

In contrast to the diplomatic and nuclear avenues, the regional field is particularly ripe for miscalculation, given the nature of kinetic operations. These risks are amplified if Iran leans on proxies or allied militias. Tehran is trading deniability for discipline.

It is too soon to say whether Iran's new negotiating strategy—combined with Abe's outreach—will work. But one conclusion is clear: Even in the unlikely event that the US begins to take the heat off, Tehran is unlikely to declare its conditions met and withdraw its threats. This new, volatile negotiations framework is here to stay.