Eurasia Group | Iran elected a hard-liner president. What does that mean for the nuclear deal?

Iran elected a hard-liner president. What does that mean for the nuclear deal? 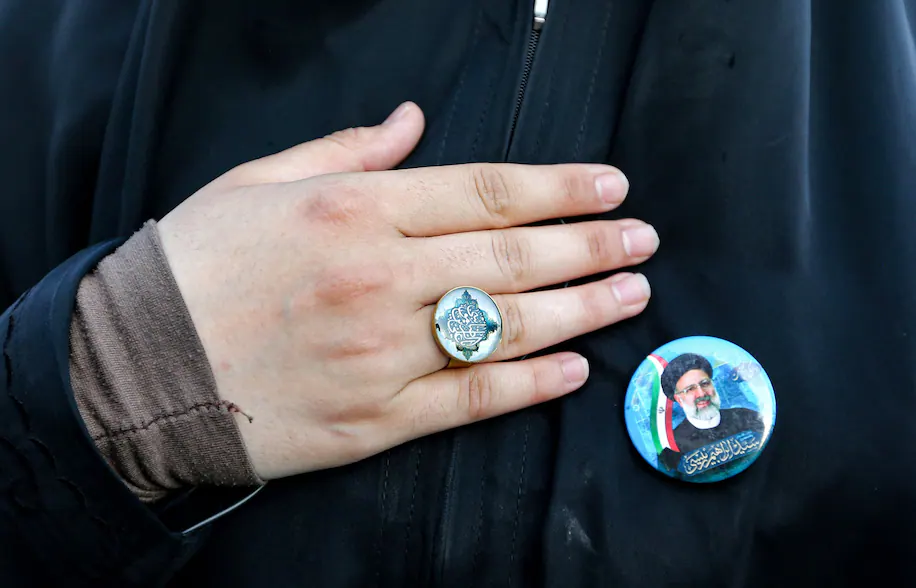 A woman holds her hand to her chest next to a pin bearing the image of Ebrahim Raisi, Iran’s newly elected president, at a rally June 19 in Tehran celebrating his victory. (Atta Kenare/AFP/Getty Images)
Judiciary chief Ebrahim Raisi has been voted Iran's next president in an election that had historically low turnout. Raisi is a hard-liner, closely aligned with Ayatollah Ali Khamenei's anti-Western views.

When Raisi takes office in August, he will chart a different course in foreign and domestic policy than President Hassan Rouhani, a relative moderate who aimed to expand Iran's engagement with the world.

No issue will be more important or sensitive than the 2015 nuclear agreement, the Joint Comprehensive Plan of Action (JCPOA). Since April, the United States, Iran and other parties have been negotiating a path to reviving the deal, which imposed limits on Iran's nuclear program in exchange for relief from economic sanctions. The issues are complex and negotiations may not be completed when Raisi starts his term.

The hard-liner's election probably does not mean the death of the JCPOA, which experts believe is in Iran's economic interest. But the transition is likely to complicate the deal's implementation and add additional barriers to subsequent negotiations. This may weigh on the longer-term sustainability of the deal.

Why Raisi is unlikely to walk away from the JCPOA

It's possible that the United States and Iran will agree to revive the JCPOA before Raisi takes office. Or, he will be charged with continuing the talks. Either way, he is unlikely to derail the agreement.

In Iran, presidential power is limited, especially over foreign policy. Rouhani did not unilaterally decide to negotiate the JCPOA, and Raisi cannot unilaterally decide to destroy it, even if he wanted to. The Islamic Republic makes strategic decisions as a system, with buy-in from across institutions and with Khamenei casting the final vote. So long as the system supports the JCPOA, Raisi will probably not be able to halt diplomatic progress. Indeed, Raisi himself has repeatedly and publicly expressed support for the deal.

Many Iranians were disappointed with the scale and distribution of the relief, given the effects of remaining U.S. sanctions, Iran's challenging business environment and sky-high public expectations. But the economic gains were real, and economists expect a similar dynamic this time around. At the same time, Raisi can shrug off conservatives' concern about Iran's concessions by blaming them on his predecessor.

But Raisi may undermine some of the JCPOA's potential

Although Raisi will reap short-term benefits, he will probably balk at broader economic integration with the West as well as long-needed domestic reforms. That will put a ceiling on the benefits that many Iranians will receive under the deal's revival.

Rouhani devoted much of his political capital to bringing in foreign investment. He toured European capitals trying to drum up business, reformed domestic banking laws and fought turf wars with the powerful Islamic Revolutionary Guard Corps (IRGC). Rouhani recognized that Iran needed foreign investment and technology — especially in the energy and automotive sectors — as well as other reforms for sustained economic growth.

But Raisi probably won't actively promote foreign deals or structural reforms. He is a devoted follower of Khamenei's “resistance economy” model, which advocates building domestic capacity and self-reliance to “neutralize” sanctions. Tying Iran's economy closer to the West does not have a place in that ideology, nor does disrupting the IRGC's grip on critical sectors. And major Western companies are likely to be more cautious about entering the Iranian market — Raisi will do little to make them feel welcome, and the prospect of a Republican victory in the 2024 U.S. presidential election raises uncertainty about future U.S. sanctions.

Follow-on negotiations may be more difficult

The United States and Europe see the JCPOA's revival as a “platform” for subsequent negotiations to improve the deal itself and address concerns regarding Iran's regional policy and missile program. Iran has largely been cool to the idea — and Raisi's election adds further challenges to this plan.

First, building public support in the West for negotiating with Raisi will be difficult, given his hard-line views and his background. Even if the Iranian president does not decide foreign policy, international perceptions matter. The election of Rouhani in 2013, and his appointment of Foreign Minister Javad Zarif, made U.S. diplomacy with Iran more palatable, as CIA Director William J. Burns writes in his memoir. Dealing with Raisi would be the opposite, especially if he appoints an equally hard-line official as his foreign minister.

Second, Raisi's economic approach may defang some U.S. leverage over Iran. Even after JCPOA reentry, some U.S. sanctions would remain — such as restrictions on access to the U.S. dollar and U.S. primary sanctions. Washington presumably could offer to curtail these restrictions in exchange for Iranian concessions.

But the United States should not overestimate the cards it holds. If Raisi has little interest in foreign investment, the promise of U.S. involvement in Iran's economy may be a weak incentive. That's especially true when compared with what the United States would demand, such as a long-term extension on the restrictions on Iran's nuclear program.

How sustainable is the JCPOA?

The JCPOA narrowly survived Donald Trump's efforts to kill it, proving the agreement is more resilient than even its supporters probably expected. Even if Raisi does not derail JCPOA reentry, important milestones are fast approaching that will generate additional pressure on the accord and U.S.-Iran relations more broadly.

Restrictions on the size and scope of Iran's nuclear program will expire between 2026 and 2031; one of Washington's key goals in follow-on talks is to lengthen those sunsets. But a significant challenge will arrive much sooner: In 2023, the United States is required to legislatively terminate sanctions, while Iran must ratify the Additional Protocol — steps that will prove politically complex in both countries.