Global South Leaders Are Ignoring Anti-China Sentiment at Their Peril 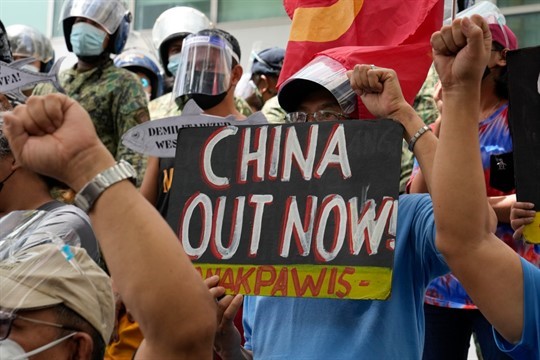 A protest in front of the Chinese Consulate in Makati city, Philippines, July 12, 2021 (AP photo by Aaron Favila).

On April 21, a suicide bomber struck the four-star Serena Hotel in Quetta, Pakistan, killing five people and wounding 12 more. Initial reports indicated the target was Nong Rong, the Chinese ambassador to Pakistan, who was staying at the Serena but was not present at the time. The Tehrik-i-Taliban, or TTP, a jihadi terrorist group active along the Pakistani-Afghan border, later claimed responsibility for the attack, vaguely saying it had targeted “locals and foreigners” staying at the hotel.

A few months later, in mid-July, another suicide attack targeted a convoy of Chinese workers headed to the construction site of a hydroelectric dam in Dasu, a remote town north of the Pakistani capital, Islamabad. The blast left nine Chinese workers dead, and scores of others injured. The Chinese company in charge of the project put construction on hold, and Chinese Premier Li Keqiang called Pakistani Prime Minister Imran Khan to demand a thorough investigation.

While the TTP has not yet claimed this attack, their history suggests they were likely responsible. The Pakistani Taliban has long targeted symbols of the Pakistani state, considering any friend of Islamabad to be their enemy. Given the close diplomatic and economic ties between Pakistan and China—the two have since 2013 been working on a $50 billion set of infrastructure projects known as the China-Pakistan Economic Corridor, and have supported each other on the international stage—the TTP now apparently see China, too, as a natural opponent. Beijing, for its part, recently hosted a delegation from the Afghan Taliban and demanded that the insurgent group “completely break ties” with the TTP.

Pakistan was once home to one of the world's most pro-China populations, largely due to appreciation of Beijing's economic support. But China's recent foreign policy aggression, its willingness to sidestep Islamabad to engage insurgent groups directly, its lack of transparency regarding the initial emergence of COVID-19 and its repression of the Uyghurs and other Muslim minorities in Xinjiang have tarnished its reputation among many Pakistanis. This anti-China sentiment is helping fuel a recent spike in violent attacks aimed at Chinese nationals and entities. In addition to the TTP, insurgents in Balochistan province, where Chinese projects have disrupted traditional ways of life, have in recent years targeted and killed Chinese citizens.

Despite the anti-China turn among many Pakistanis, Khan's government remains firmly tethered to Beijing. “China has been one of the greatest friends to us in our most difficult times, when we were really struggling,” he said in a recent interview, explaining his unwillingness to stand up for the Uyghurs. “When our economy was struggling, China came to our rescue.”

Khan's remarks underscore a growing trend across a diverse swath of the developing world, from Asia to Africa and beyond: a growing, dangerous divergence between public and governmental sentiment on China. Senior officials like Khan are deepening ties with Beijing even though their people increasingly don't want them to. This is a dangerous game, for when governments reject their people's wishes, violence—like the recent attacks in Pakistan—can follow. If the trend continues, China could become what the historian Nancy Rose Hunt calls a “nervous state,” one whose representatives abroad feel obliged to constantly look over their shoulders.

Indeed, as anti-China sentiment rises in many wealthy countries, particularly those in the West, the trend is being mirrored in many lower- and middle-income states, whose residents tend to be ruled by autocratic or hybrid regimes that are largely unresponsive to public sentiment. According to a 2017 Pew survey, 90 percent of Vietnamese, 77 percent of Filipinos, and 74 percent of Indonesians see China's power and influence as a threat to their country. Pew found in 2019 that a majority of Filipinos, along with pluralities of Turks and Indians, hold an unfavorable view of China. Antipathy toward China is also on the rise in countries like Cambodia and Zimbabwe.

Yet many of these countries' governments are ignoring their people's wishes and maintaining or deepening their ties with Beijing instead.

In the Philippines, close to a thousand protesters converged on the Chinese consulate in Manila on the country's Independence Day last month, defying the government's COVID-related ban on mass gatherings while chanting and waving signs with phrases like “China out.” This should come as no surprise: A majority of Filipinos had negative views of China even before the pandemic, which has spurred anti-Chinese conspiracy theories that have further undermined the country's standing.

But President Rodrigo Duterte continues to embrace China despite his public's wishes. “China remains to be our benefactor,” he said in May after his foreign minister posted a series of expletive-laced tweets criticizing Beijing's aggression in the South China Sea. “Just because we have a conflict with China does not mean to say that we have to be rude and disrespectful.”

Other high-profile politicians seem to have a better grip on the national mood. Manny Pacquiao, a senator and boxing star who is rumored to be considering a run for president in next year's elections, recently criticized Duterte's China policy as “disheartening.”

Across a diverse swath of the developing world, there is a growing and dangerous divergence between public and governmental sentiment on China.

In Vietnam, the ruling Communist Party has often had trouble managing pervasive anti-China sentiment, which is rooted in a history of conflict and colonialism, but has been exacerbated more recently by territorial disputes in the South China Sea, as well as by growing concerns about the environmental and social costs of Chinese investment. In 2018, the country was rocked by massive protests against Beijing's influence, which turned violent in some areas, resulting in numerous injuries and extensive property damage. The unrest was sparked by a controversial proposal to grant favorable terms to Chinese investors in new Special Economic Zones.

As the political scientist Benedict Kerkvliet has documented, Vietnamese anti-China demonstrators have in the past complained that “national leaders have sold the country to China.” Some party members have even alleged that China intends to make Vietnam a “new type of vassal” to “serve Chinese interests.”

Similar anti-China violence has occurred elsewhere in the past year, including in Zambia, which owes a high share of its public debt to Beijing. In late May, a trio of Zambians beat three Chinese textile workers to death in the capital, Lusaka, just days after its mayor accused Chinese factory bosses of “slavery reloaded.” In Argentina, a brawl erupted when a local called a Chinese businessman “coronavirus.”

Even where tensions have not yet turned violent, anger is nonetheless simmering just below the surface, as seen with anti-China protests in countries like India, Nepal and even Cambodia.

Like Pakistan, Cambodia is among China's closest international partners. Cambodian Prime Minister Hun Sen, like Pakistan's Khan, believes he can disregard anti-China sentiment among his population while engaging even more with Beijing, lured by its promises of money and diplomatic support. Even if public discontent grows, leaders like these two often believe they can simply control it through repression or patronage.

But the risk of anti-Chinese violence is most serious in developing countries like Pakistan and Cambodia, mainly because they are already vulnerable to social unrest. Their high rates of poverty and economic inequality, poor social services, slow recoveries from COVID-19 and limited capacity for economic stimulus already combine to make a tinder box. In such an environment, anti-China sentiment is one more potential trigger of social unrest.

China, in turn, could find itself intervening around the world to protect its citizens. In 2014, it had to evacuate thousands of its citizens from Vietnam due to anti-Chinese violence there. More recently, a sharp spike of anti-China sentiment in Myanmar—stemming from local anger at China's support of the unpopular military junta there—reportedly led Beijing to order state-owned enterprises to evacuate non-essential workers from the country.

In fact, some nationalistic Chinese voices are beginning to call on the government to do more to protect its people abroad. Following the July attack in Pakistan, Hu Xijin, the fiery editor-in-chief of China's state-run Global Times, wrote on Twitter: “If Pakistan's capability is not enough, with its consent, China's missiles and special forces can be put into action.”

The risk for developing country leaders, then, is twofold: social unrest and the prospect of Chinese pressure to intervene in sensitive cases.

Yet many leaders are either blind to these risks or, seeing no way out of their dependence on China's economic and political clout, are at least downplaying them. When Khan condemned the terrorist attack in Quetta, he promised, “Our nation has made great sacrifices in defeating terrorism and we will not allow this scourge to rise again.”

The reality, though, is that as long as his and other governments across the Global South continue to ignore their publics and deepen ties with Beijing, this scourge will remain at risk of rising again.