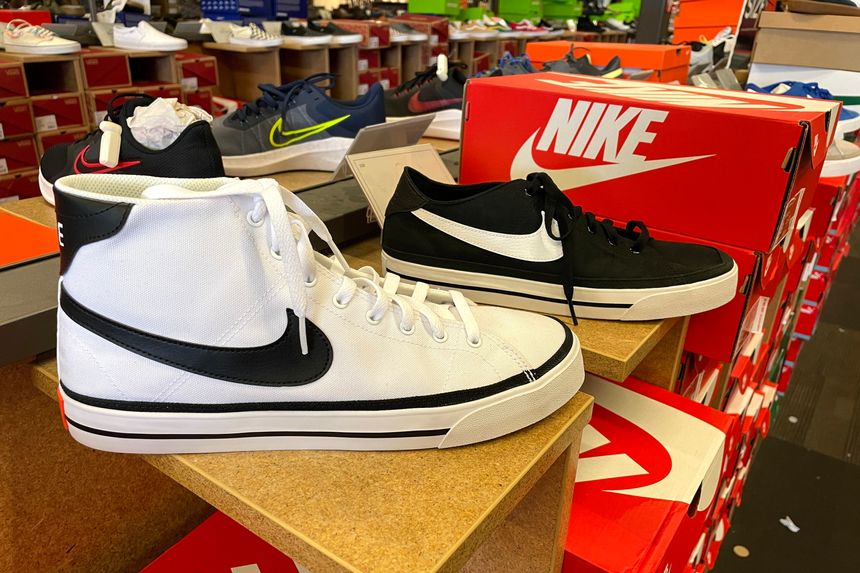 Nike, which makes around half of its footwear in Vietnam, said last week it had lost 10 weeks of production there. PHOTO: JUSTIN SULLIVAN/GETTY IMAGES
SINGAPORE—Manufacturers looking to shift production out of China during the U.S.-China trade war piled into Vietnam, attracted by its low wages and the government's business-friendly reputation.

But strict lockdowns to contain a Covid-19 wave in the largely unvaccinated country have crippled manufacturing since July, forcing companies such as Nike Inc. and Lululemon Athletica Inc. to shift production to other countries. That is prompting some businesses to rethink their heavy reliance on factories in Vietnam.

Nike, which makes around half of its footwear in Vietnam, said last week that it had lost 10 weeks of production there because of factory shutdowns. Those 10 weeks translate to about 100 million pairs of Nike shoes not made, according to BTIG LLC, a U.S. brokerage. Nike now anticipates demand for its products will exceed available supply for the next eight months.

“Our experience with Covid-related factory closures suggests that reopening and ramping back to full production scale will take time,” Matt Friend, Nike's chief financial officer, said last week. The company said it was maximizing footwear production capacity in other countries and is shifting apparel production out of Vietnam to places such as China.

A late August survey of nearly 100 representatives of manufacturing sector companies by the American Chamber of Commerce in Vietnam found that one fifth had already moved some production to other countries.

“What people are realizing is, whether it be China or Vietnam, or whatever, you can't have all your eggs in one basket, you can't be vulnerable to one country from a supply-chain standpoint,” said Jonathan Moreno, head of the Chamber's manufacturing and supply-chain task force. 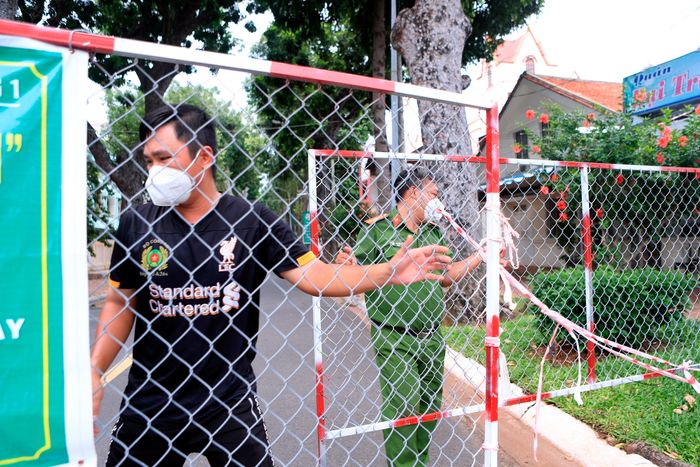 Barricades erected as part of a Covid-19 lockdown in Vung Tau, Vietnam, were removed on Thursday. PHOTO: HAU DINH/ASSOCIATED PRESS

Western businesses have been left guessing about when Vietnam will lift its manufacturing curbs, which have included requiring factories to have their workers live inside their gates or otherwise be isolated from society, or in some cases, outright factory closures. Several noted in public statements that restrictions were set to last until August or mid-September, only for those dates to pass without any significant shift in policy.

Vietnam's government—reassured by its success in containing Covid-19 to around 1,500 cases in 2020, in part through targeted shutdowns that sometimes involved closing off whole villages—moved more slowly than many other countries to acquire vaccines.

This year Vietnamese authorities, caught off guard by the ferocity of new outbreaks, went back to lockdowns. When it became clear in June and July that the Delta variant of the coronavirus was spreading widely among a population where fewer than 1% were fully vaccinated at the time, the government imposed restrictions that were even stricter than the ones that had been effective before, and which were tougher than some other countries with large manufacturing sectors.

While it makes sense for Vietnam to play to its strengths, the current problem is especially complex, said Tuong Vu, a political-science professor at the University of Oregon. Lockdowns have been less effective this time because the virus had already spread so widely before they started, and because the Delta variant spreads faster than previous strains, he said.

In the country's south, where much of Vietnam's industry is concentrated, factories that wish to keep running are required to implement elaborate protocols, such as the “three-in-one-place” program, in which laborers eat, sleep, and work at their workplace. Large shoe and apparel factories with thousands of workers have found it impossible to house so many people on site or in dormitory bubbles. Many are shut down, or operating with skeleton crews. 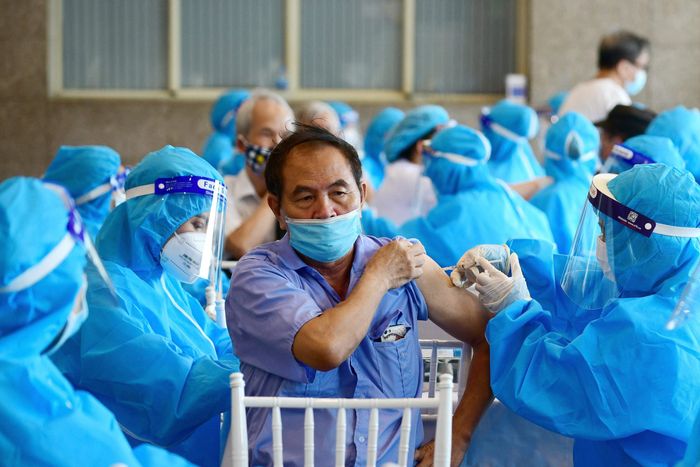 A Covid-19 vaccination site in Hanoi on Sept. 10. Around a third of the Vietnamese population has received at least one dose.
PHOTO: NHAC NGUYEN/AGENCE FRANCE-PRESSE/GETTY IMAGES

Vietnam's Ministry of Health appears to have acknowledged mistakes over vaccine policy, posting an article on its website in June that said cumbersome bureaucracy and “fear of taking responsibility” slowed vaccine purchases. Today around 9% of Vietnamese are fully vaccinated, compared with 65% of Cambodians, according to Our World in Data. The government didn't respond to requests for further comment.

Some companies are working to lessen their reliance on Vietnam.

“We actually have diversified quite a bit out of Vietnam,” said Jeremy Hoff, chief executive officer of Hooker Furniture Corp , which relies on the country for a significant share of its manufacturing. “We've even gone back to China a little bit when necessary. If we feel more stability is in a country currently, that is what we're going to do.”

Andrew Rees, the CEO of Crocs Inc., the shoe company, said in mid-September it is moving some production to other parts of the world. He said the company had already been planning to migrate some production out of Vietnam, and is adding facilities in Indonesia and India. “Ongoing diversification is essentially the name of the game,” he said.

Recently Covid-19 cases and deaths have begun to drop in Vietnam, which the government says is a result of its stringent health measures. Vietnam's daily cases peaked around early September, with roughly 13,000 new daily infections, but have since dropped to around 9,000. Vaccinations are picking up steam.

Around a third of the population has now received at least one dose. Authorities said that Ho Chi Minh City, a manufacturing hub, would ease restrictions on Friday.

But companies and business groups warn that even once they get the green light to restart operations, it will take months to restore full production. Many workers have returned to rural villages and may be reluctant to come back to urban areas if they are unvaccinated. Interprovincial travel restrictions could create further hurdles to replenishing workforces, depending on how quickly they are lifted, companies say.

Some business analysts said Vietnam's tough approach to factory shutdowns could hurt its competitiveness. In Indonesia, some export factories were able to continue operating at full capacity during its Covid-19 wave this year, and shutdowns tended to be for shorter periods. Chinese authorities have nipped outbreaks in the bud using mass testing and targeted shutdowns of ports and specific factories, without resorting to the monthslong lockdowns in manufacturing regions that Vietnam has imposed.

But the lockdowns have begun to shift perceptions about where goods can be reliably procured in Asia.

“When you think about the amount of effort everyone was putting in to getting out of China and now one of the places where you can get goods is China, I mean it really is crazy the roller coaster that everybody's been on,” said Roger Rawlins, the CEO of Designer Brands Inc., a North American footwear retailer, at a conference earlier in September.
The Wall Street Journal
The Wall Street Journal
SUBSCRIBE TO SIGNAL
LOUD WORLD. CLEAR SIGNAL. Signal is a newsletter on international affairs published four times a week by GZERO Media, a Eurasia Group company.
The Wall Street Journal