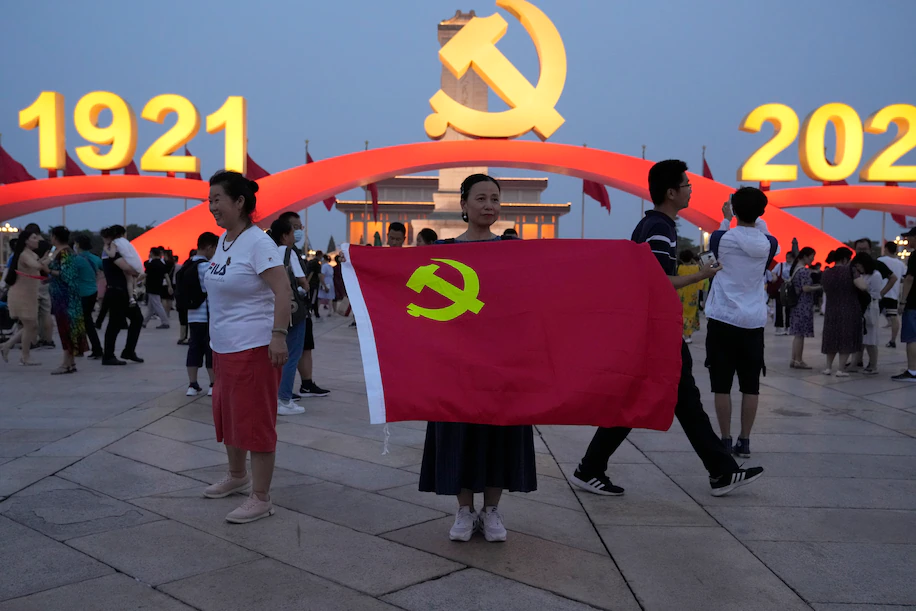 A woman holds up a Communist Party flag during celebrations to mark the 100th anniversary of the founding of China’s ruling Communist Party, at Tiananmen Square in Beijing on July 15. (Ng Han Guan/AP)

After the Japanese table tennis team mounted an upset against the Chinese in the mixed doubles Olympic final, they found themselves facing a barrage of online hate. Even before the competitors took to the podium, death threats and messages to “go to hell” and “disappear” flooded their social media accounts.

They weren't the only ones.

A Taiwanese badminton player was slammed for dedicating his gold medal to “my country, Taiwan.” A Japanese gymnast who beat a Chinese favorite was accused of winning on unfair grounds. A Chinese sports shooter was bullied into deleting a selfie after failing to qualify for her final.

Throughout the Tokyo Olympics, online nationalists in China have scrutinized the behavior of Chinese athletes and their competitors, pouncing on perceived insults and extolling symbolic shows of strength.

In a news conference, Japanese table tennis player Jun Mizutani condemned the online abuse that he and his partner, Mima Ito, have received.

“I've been attacked probably more than others, so I have more immunity than others,” Mizutani said. “But that doesn't mean that I can forgive them, and if I do, they will just move to the next target, so it needs to be dealt with properly.”

It isn't unusual for nationalist sentiment in China to surge during the Olympics, especially one held in historic foe Japan, experts say. But the unrelenting fervor of Chinese Internet trolls seems to have hit a fever pitch in Tokyo, a symptom of a state-backed rise in nationalism that is showing signs of spiraling out of control.

“This variant of nationalism — it's more intense, more uncompromising, and more unabashed,” said Ali Wyne, a senior analyst at the Eurasia Group who studies China. Keyboard warriors do not represent most everyday Chinese people, he emphasized, but they nonetheless reflect a citizenry that feels more powerful — and more eager to flex that power — than in years past.

Under Xi Jinping, the Chinese Communist Party has sought to strategically stoke national pride, declaring at the party's recent centenary that China's rise is unstoppable. This has served to strengthen the government's — and Xi's — grip on power, but it has fueled intense anti-foreigner sentiment that has erupted in unexpected ways during the Olympics, including backlash against some Chinese athletes for losing and attacks against their victorious rivals.

The online abuse has garnered attention at a time when high-profile athletes have made public statements on the importance of mental health. In China, state-run media outlets and pockets of community members have tried to tamp down anger toward Olympians, but with limited success.

“Nationalism — once that genie is out of that bottle, it can be hard to contain,” Wyne said.

This is especially true in a country where 1 billion people have ready access to the Internet — albeit one that is tightly controlled, said Baogang He, a professor of international relations at Deakin University in Australia. Like Facebook and Twitter in the United States, China's widely used social media platforms have evolved into environments where polarizing and extremist posts thrive. Government censorship has erased much of the nuance in online discourse, he added, leaving zealotry to take center stage.

A 23-year-old Chinese sports shooter deleted a post apologizing for not making her final when she got a deluge of comments saying that a selfie was “inappropriate” given her loss.

When Chinese table tennis players Liu Shiwen and Xu Xin lost the mixed doubles final to Mizutani and Ito, they both made public apologies as nationalist users criticized their performance on the microblogging site Weibo.

“I feel like I've failed the team,” Liu said to reporters after the match, tears in her eyes. “I'm sorry everyone.”

“The whole country was looking forward to this final,” Xu said. “I think the entire Chinese team cannot accept this result.”

The Olympic Games hold strong symbolic resonance in China, said Suisheng Zhao, executive director of the Center for China-U.S. Cooperation at the University of Denver. If the 2008 Beijing Olympics marked China's reentry onto the world stage, this year's Games, held amid intensifying competition between China and other world powers, are seen as a chance to show that the country is no longer rising, but at the top.

“The message is that they have regained their position,” Zhao said. “It's a very unique sense of Chinese national rejuvenation.”

Athletes who contribute to the gold medal tally — considered the most important metric to China — have been rewarded in the public sphere.

Sprinter Su Bingtian, a 31-year-old Guangdong native who has been lionized in state media as a national star, was anointed as the “miracle of the yellow race” on Weibo after becoming the first Asian athlete since the 1930s to qualify for the men's 100-meter final. Tang Xijing, an 18-year-old gymnast who clinched silver on the balance beam, was lauded by nationalists for using songs from a pro-China, anti-Japanese film during her floor routine.

This week, two Chinese cyclists wore pins of former communist leader Mao Zedong during their medal ceremony — a gesture praised by branches of the Communist Party, but flagged by Olympic officials as a potential violation of rules that bar political propaganda.

“We are in contact with the Chinese Olympic Committee, who have assured us that we will receive a full formal answer soon,” International Olympic Committee spokesman Mark Adams said. “But they've also assured us already that this will not happen again.”

Even when athletes win, they're not always safe from scrutiny.

Yang Qian, a shooter who clinched China's first gold, was briefly attacked for an old Weibo post showing off her collection of shoes from Nike — a brand that nationalists have sought to boycott for expressing concerns over forced labor practices in Xinjiang.

Taiwanese badminton duo Lee Yang and Wang Chi-lin, who beat the Chinese team in the men's doubles final, have been scorned for comments that nationalists see as undermining the Communist Party's “One-China” policy. A Taiwanese celebrity lost sponsorship deals in China after showing support for Taiwanese players as “national athletes” without specifying which nation she was referring to. An agent for Lee and Wang declined to comment on the issue, saying that it was “too sensitive.”

Nationalist fervor has become a “dangerous driving force” in China, Zhao said, constraining the government's foreign policy approach and limiting options for how to improve ties with the United States, Japan, Taiwan and others. And with just six months until the Beijing Winter Olympics, hypernationalists in the country could continue to expand their influence.

“Can this type of emotional and irrational sentiment really serve China's interest?” Zhao asked. “How far will Xi let this go on? We have to wait and see.”