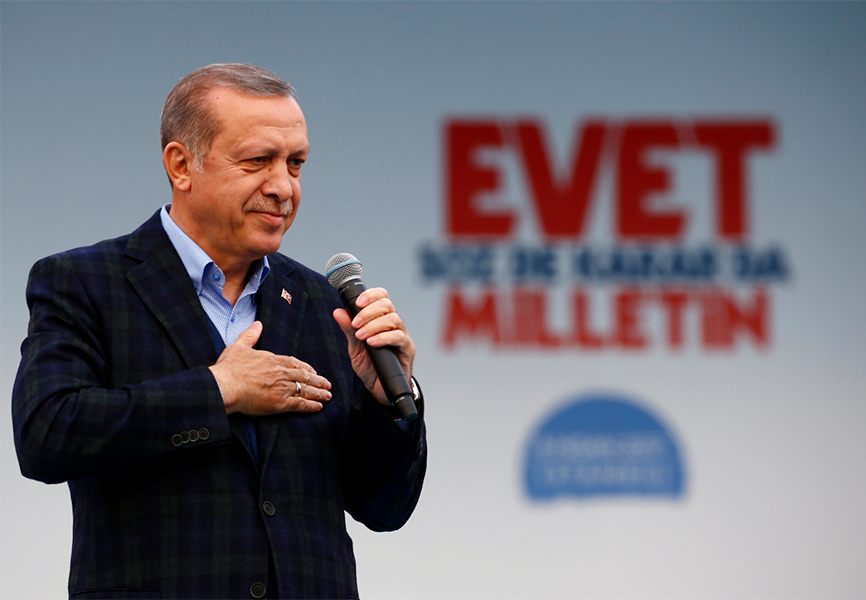 Turkish President Tayyip Erdogan greets his supporters during a rally for the referendum in Istanbul, Turkey, April 8, 2017. REUTERS/Murad Sezer
[UPDATED MONDAY, APRIL 17, 2017 at 11:22AM EST]

erdogan CONSOLIDATES powerTurkish President Recep Tayyip Erdogan has claimed victory in Sunday's constitutional referendum after unofficial results showed a narrow 51percent lead for 'yes.' But Erdogan's detractors are not giving up the fight. The opposition has refused to accept the outcome, objecting to the conditions under which the referendum was held and by some controversial last minute decisions by the High Electoral Board.

These concerns have been echoed by the OSCE, while Turkey's Western allies have stayed mum. As Erdogan brushes aside these challenges and pushes for another extension to the state of emergency, his political agenda is bound to become even more controversial in the eyes of Turkey's deeply divided public.

Turkish voters went to the polls to vote on a series of constitutional reforms to grant sweeping new powers to President Recep Tayyip Erdogan.

On paper, the referendum was about a deeply controversial package of reforms that would deal the fatal blow to Turkey's barely functioning system of checks and balances. In a nutshell, it would give the office of the president vast powers over every other branch of the state. Once introduced, this dysfunctional new system would be extremely difficult to undo, and risks falling apart without a powerful leader like Erdogan who can hold the pieces together.

But to most voters who don't know the fine print of the reforms, the referendum was essentially a vote of confidence in Erdogan's ability to deliver stability and security. And for that reason, Eurasia Group correctly predicted that it would be marginally more likely that the referendum would be approved. This has been the cornerstone of Erdogan's electoral strategy: to stoke controversy and political tensions, then portray himself as the only politician strong enough to confront the challenges that ensue. Those who were willing to vote 'no' did not have a ready alternative to Erdogan's one-man rule, but would be willing to risk the country's political and economic stability on the way to finding one. 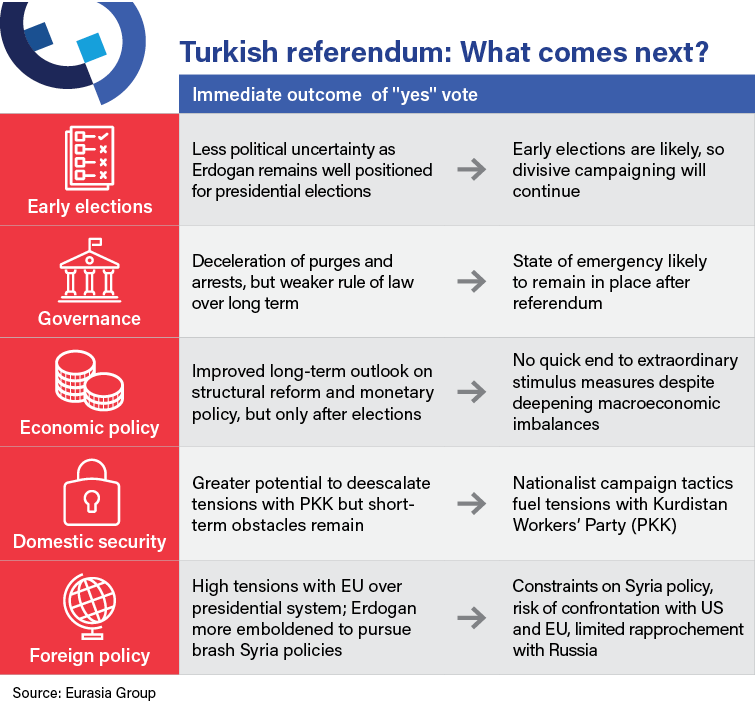 What are the consequences?

While problematic in the long-term, a 'yes' vote will allow for a marginal de-escalation of political risks in the immediate aftermath of the vote. Erdogan would have crossed the most challenging hurdle on his way to formally cementing his rule and might be able to relax a bit. But he would still need to win the next round of presidential elections in 2019 to formally acquire most of his new powers, meaning that he will likely remain in campaign mode until then. That means no easy end to the ongoing state of emergency, little space to de-escalate tensions with the Kurds, and a reluctance to wean the economy off extraordinary stimulus measures.

A 'no' vote would have indicated that Turks are more willing to accept a bumpy-ride in the short-term than a Faustian bargain for stability. 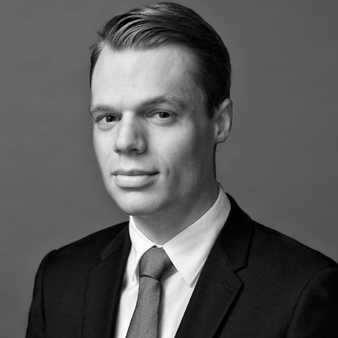