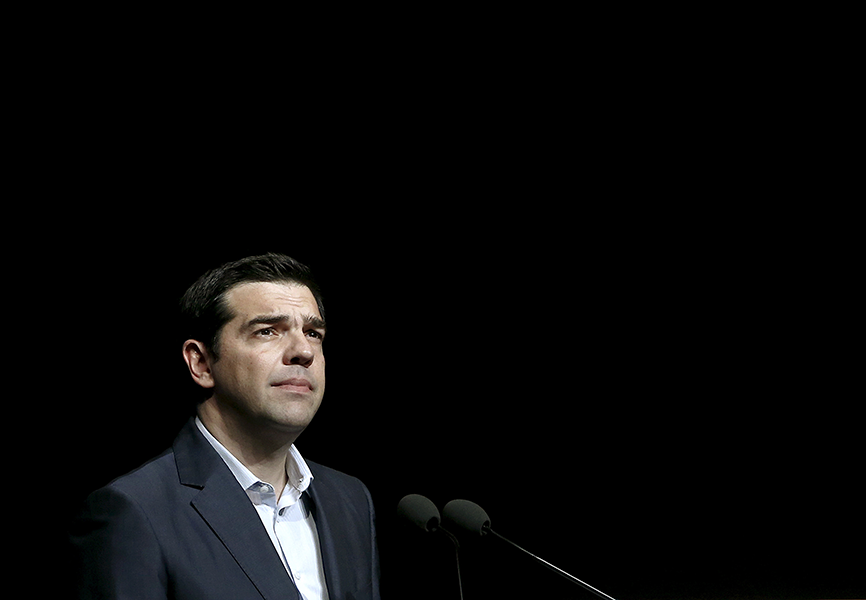 Prime Minister Alexis Tsipras continues to fall in polls as he is forced to accept more and more austerity measures to keep his country afloat.
Donald Trump had a historically bad series of news cycles this month, right up until he left the country on an overseas trip last week. But believe it or not, Trump—currently with an approval rating just under 40 percent—is sitting pretty compared to some of the world's other heads of state and government. Here then is a world tour of political figureheads who are even less popular than the U.S. president:

President Nicolas Maduro may have retained an approval rate in the mid-to-low twenties since last year, but he is currently the world's most embattled political leader. Venezuelans take to the streets daily to violently protest his government amid crippling food and medicine shortages—74 percent of Venezuelans have lost an average of 19 pounds over the past year, and roughly 80 percent of basic medicines are unavailable.

The situation has gotten so bad for a number of reasons. First is that Maduro has the misfortune of presiding over a country whose economy is almost wholly dependent on oil (over 95 percent of export revenues come from it) at a time of low oil-prices, a problem compounded by severe financial mismanagement over many years. Second are his bumbling attempts to quash dissent, epitomized by his recent attempt to abolish the National Assembly, only to retreat at the popular backlash. And not to be overlooked is that Maduro simply lacks the political charisma of his predecessor, the still-revered Hugo Chavez. So far, Maduro has used a combination of police forces, the national guard and armed militias to contain the protests; when he has to call in the military, the game will be all but over for him.

Following an impeached president should be easy; the bar has been set low. But as Brazilian president Michel Temer has found out—with an approval rating in the single digits—following Dilma Rousseff has been no walk in the park. The veteran politician is now clinging to his job after recordings emerged of him allegedly negotiating the payment of a bribe to silence a fellow corrupt politician. He may soon be the second president in a row to be impeached, due to links with the far-reaching Lavo Jato graft scandal.

But Brazil was already in big trouble even before this latest scandal erupted. The slowdown of the global economy and the accompanying crash in commodity prices have hit Brazil hard, leading to the country's worst recession ever. GDP has fallen more than 7 percent in the last two years, unemployment has roughly tripled, and at least 3.5 million people who had been lifted out of poverty in the boom years between 2004 and 2014 have slid back. Much of this dates back to before Temer's presidency — but now, the reforms he introduced to fix Brazil's economy will likely be subsumed by scandal.

South African President Jacob Zuma's approval rating is at an all-time low of 20 percent across the country's seven major metropolitan areas; more than 70 percent of South Africans want him to resign. Some of that has to with South Africa's slumping economy, which took a hit with the global recession and the slowdown of the commodities super-cycle. Since Zuma assumed the presidency in 2009, the country's currency has lost a third of its value, and unemployment currently stands at 27 percent. It's hard to remain popular with numbers like that.

But it's Zuma himself who's the bigger problem. Zuma has had nearly 800 charges of corruption leveled against him, and he relies on patronage networks to keep him afloat politically. He's gotten rid of well-respected ministers (and political rivals) like Finance Minister Pravin Gordhan, who crusaded against government corruption. At the moment, Zuma is grooming his ex-wife to be his political successor to protect himself from prosecution once he leaves office. Zuma's term runs through 2019—for most South Africans, change can't come soon enough.

If you're not going to be popular, you may as well be rich. Malaysia's Prime Minister Najib Razak has been in office since 2009, which is the same year he established an economic-development investment fund called 1Malaysia Development Berhad (1MDB). More than $1 billion ended up in Najib's personal account, which at a certain point he tried to pass off as a “gift” from the Saudi royal family. He was backed up by Malaysia's attorney general, who reported that the money constituted a legal donation, and that “most” of it was returned. Unsurprisingly, his current approval rating is at record lows.

But politically-speaking, Najib doesn't have much to worry about—he retains firm control of the United Malays National Organization (UMNO), the political party that has dominated Malaysian politics for nearly six decades. He has systematically sidelined opponents within the party, and his main adversaries outside the party have been jailed on what critics say are politicized charges. Who needs popularity when you have political power and money in the bank?

Prime Minister Alexis Tsipras continues to fall in polls as he is forced to accept more and more austerity measures to keep his country afloat. Greece's financial woes began well before Tsipras assumed the reins (the country has lost 25 percent of its GDP since the crisis began in 2010), but Tsipras and his Syriza government have compounded problems. Syriza triggered elections in 2014 at a time when it seemed the Greek economy was finding its footing, which Tsipras won by promising to bend Berlin to his will and getting the Germans to forgive Greek debt (he's still waiting for that).

That was followed by the tumultuous tenure of finance minister Yanis Varoufakis, whose brash rhetoric made an already weary-E.U. even less likely to grant Greece concessions, and a snap referendum on whether to accept a new bailout deal from foreign creditors. Greeks said no, but Tsipras went ahead and signed it anyway.

Correction: The original version of this story misstated Najib Razak's title. He is the Prime Minister of Malaysia, not the President.

This piece was originally published in TIME magazine.