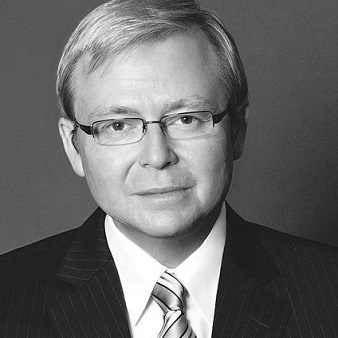 As prime minister of Australia (2007–2010; 2013), Kevin Rudd led the country's response during the global financial crisis, reviewed by the IMF as the most effective stimulus strategy of all member states. He is also internationally recognized as one of the founders of the G20, which drove the global response to the crisis, and which in 2009 helped prevent the crisis from spiraling into a second global depression. Kevin, a proficient speaker of Mandarin Chinese, remains engaged in a range of international challenges, including global economic management, the rise of China, climate change, sustainable development, and interfaith dialogue.

As prime minister and foreign minister (2010–2012), he was active in global and regional foreign policy leadership. He was a driving force in expanding the East Asia Summit (EAS) to include both the US and Russia in 2010. He likewise initiated the concept of transforming the EAS into a wider Asia Pacific Community to help manage deep-rooted tensions in Asia by building over time the institutions and culture of common security in Asia. He drove Australia's successful bid for its current nonpermanent seat on the UN Security Council and the near doubling of the country's foreign aid budget.

Among other notable achievements, Kevin funded the establishment of the Australian Centre on China in the World at the Australian National University and the Australian National Security College. He has co-chaired the World Economic Forum's Global Agenda Council on Fragile States and currently co-chairs the WEF Council on the Chinese Economy. He is a senior fellow at the Belfer Center on International Relations at Harvard University's Kennedy School of Government, co-chairman of the International Finance Forum of China, and a visiting professor at Tsinghua University.